For a few years now, I have had an idea for a novel dancing in my head. Believe it or not, I was more scared to reveal this fact about myself than I am to talk about my own boobs. Weird. But there it is – something I have talked about with only a few select people in my life until today when I hit “Publish” on this entry. Yikes…I kind of feel like I just said I love you on a first date.

Until a few weeks ago, I didn’t have any plans to actually put this thought into action. Here and there, I’d think about the setting and the plot, jot down some ideas, listen out for good character names, and piece together parts of my protagonist’s personality. Once when my commuter rail train was stuck for almost three hours due to a brush fire near Route 128 station, I wrote the draft of what could be the first chapter (mainly to distract myself from terrible smells and the long line of restless people that were waiting for the bathroom which happened to be right next to my seat). A few years ago, before the birth of my current idea, my Mom and I both got the itch to write, and we found a fabulous writing teacher to give us some lessons. I still remember and appreciate much of Sean’s advice. But sadly, soon after our first few lessons, our work schedules exploded and I was lucky to have time to sleep for a few hours, never mind have a hobby.

But all of the sudden, through this blog and those of you who read it, something has come alive in me, and I feel myself revved up to do something now, well, OK, soon, that I figured I’d only accomplish in my retirement. Cancer has a crazy way of kicking dreams into gear, and I’m starting to think it’s time to at least get some pen to paper, or for me, fingertips to keyboard. Strangely, however, I have come to cherish the time that I write here, with you, and I’m not ready for any other effort to take the place of that. So I thought I’d start to tell you a bit about the many disconnected pieces of this would-be-book that are dancing around (to a more and more lively beat) in my wacky, soon-to-be-bald head.

That brings us to Cape Town, South Africa. Cape Town is the birthplace of my main character and several other significant characters. It’s also where I spent a semester as a junior in college, on a study abroad program with other Bowdoin, Bates, and Colby students at the University of Cape Town. That was twelve years ago, which in many ways was a lifetime ago for me, and I’m sure, for many of you. This was before September 11th, before Iraq and Afghanistan, and before the economic downturn. It was before Katrina, the earthquake in Haiti, and the tsunamis in the Indian Ocean and Japan. Before Massachusetts and other states legalized gay marriage. Before iPhones and iPads. And among so many other worldly events and personal milestones, this was a time before a life-saving drug called herceptin made its way to the marketplace.

Yet at the same time, for me, there are some incredible constants from 2000 to now. I have a box in the basement full of letters that Brian sent me (he sent one every single day) and funny cards from Rachel and Brianne about the crazy things they were doing back home. And I remember as if it were yesterday, hugging my Mom and my Dad at Logan Airport when I returned from my trip almost five months after they had seen me off. Now I know a bit more about what those long, tearful, strong hugs were about; when I became a parent, I realized how much of that embrace was about relief.

But let’s return to South Africa. When our group visited there in 2000, South Africa was only six years past its first democratic elections; the historic time in April 1994 when men and women (including my host family) waited in lines miles long to cast their first vote. This is one of my favorite historic photos of those voting lines, and I think of it every time I feel like casting my vote at a nearby elementary school is too much of a hassle. (Obviously I did not take this photo.) 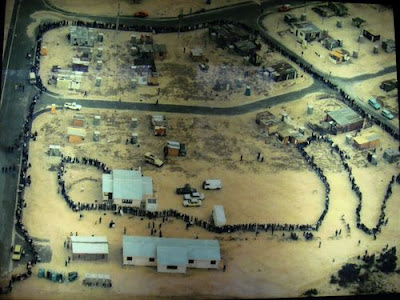 In 2000, apartheid laws were no more, but the legacy of one of the world’s most rigid systems of racial segregation was apparent almost every place you looked.  That legacy was most obvious to me in the townships, the areas in which that the apartheid government had forced black South Africans to live, and where, despite the fall of apartheid, most of South Africa’s black population still remained.

Our group of American college students spent several days a week teaching high school students in an after-school program in Langa, a township just outside of Cape Town.  Langa, short for Langalibalele, which means, sun, was conveniently established by the apartheid government next to the city’s energy-producing coal stacks, lest the horrid smells and respiratory damage caused by burning coal drift to anyone else but the city’s laborers.  (I took this photo from an elementary school we visited.  You can see the coal stacks in the foreground of the famous Table Mountain.) 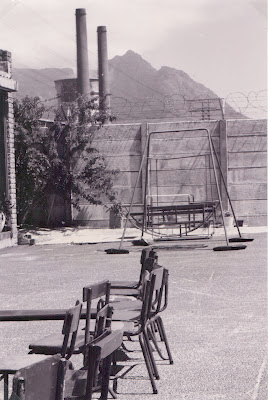 I just heard Teddy scoot from his bedroom into ours, and Annabel is kicking the wall through her crib upstairs telling me to come get her out. While I've got so much more in me to write, I'll save it for another day. I feel like I've accomplished what I wanted with this entry, anyway -- I have introduced you to Langa, a place I love, a place that gives me perspective every day, and the birthplace of a protagonist to whom I cannot wait to introduce you.

I also thought I'd leave you with one more photo that I came across this morning as I dug through my old albums. I took this one in Langa, although the students pictured here are not the ones with whom we worked. But this photo sings to me now more than ever. The transformed dumpster that you see on the right was being used as a classroom, and I found then, and find now, such inspiration from that reality paired with the message on the wall next to it. 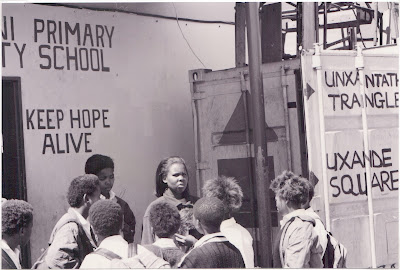