When I was 18 months old, my sister Rachel was born. (This is a photo of me admiring my new sister.) 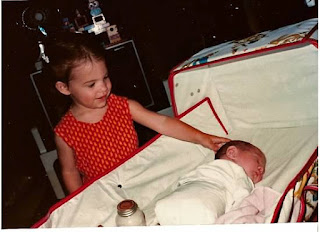 Just this past July, Rachel married a man about whom I cannot say enough good things. Matt and Rachel are quite the pair – two of the smartest people I’ve ever met, but more importantly, two of the kindest, funniest, and most humble. Their wedding will always be one of my most cherished memories. I have never seen a man so overwhelmed by love than was Matt when Rachel walked down the aisle. My Dad officiated the ceremony, Matt’s sister, Lauren, read a beautiful poem, Brian made us all laugh and cry with his reflection on love and marriage, and the bride and groom recited vows that they had written themselves. There was not a dry eye in the place by the time the ceremony was over. I kid you not, even the sound guy was crying! Then, we all danced until the lights went out.

Rachel is also a lawyer and her job is in Virginia, even though Matt is at Boston College for two more years finishing his Ph.D. in economics (or something way more complicated that I can’t even pretend to understand). Rachel is arranging with her firm to take a short leave of absence for my surgery and my recovery. There’s no doubt it’ll take a village to make the next month or so work, and Rachel’s a key leader in my village. So let me tell you one story about Rachel that sums up what she means to me.

The end of 2009 through the end of 2010 had been a rough time for our family, and for families about whom we cared very much. Almost one after another, Brian and I attended wakes and funerals of incredible women and young men, each of whose story is worthy of a book in and of themselves – my grandmother, Scotty, Brendan Burke, my aunt Mary, Brian Leonard. It was a dark time for us, and much more so, for many others.

In the fall of 2010, when our basement flooded (as did many people’s basements that fall), I didn’t sweat the small stuff. We had damage, lost a bunch of stuff, and had the usual headaches had by anyone with a flooded basement. Our home insurance didn’t cover flooding, so it was all on our dime, but after what we had seen people struggle through that year, money was the least of our worries.

But there was one box destroyed by the flood that was different for me. I tried to find perspective, tried to think of all of the reasons why I shouldn’t be crushed by the loss of these materials things, but I couldn’t.

When I left my classroom at Canton High in May 2007, I left almost everything behind (mostly electronically) for the new teacher, or anyone, to use with his or her students. All I took with me was one cardboard box full of ten binders. I taught World History and Economics and the binders contained a collection of my five years of learning and teaching those subjects. The binders were full, cover-to-cover, of quotes, teaching ideas, lesson plans, personal reflections, worksheets, song lyrics, PowerPoint print outs, newspaper articles, cartoons, magazines, exceptional student essays, and more. For example, in my Middle East binder, I had this great New York Times article I found about how Sesame Street in Israel deals with issues particular to the Palestinian-Israeli conflict, and a National Geographic article with photos and graphs that skillfully explained issues surrounding the world’s oil consumption. To me, these binders were the tangible reminder of all I had learned during my time as a teacher, and more importantly, of my first contributions to the world around me.

As we waded through our basement shin-deep in water, I didn’t immediately notice the box. When I did, I tried to pretend it wasn’t a big deal. I had spent months fighting back tears, and I had become pretty good at it. But later that day, I took a seat on my basement stairs and bawled my eyes out, trying to explain to my tired, confused, drenched husband, about the box and the binders. I’m not sure it was just the binders I was crying about that day. I think it was a culmination of all of that sadness, all of those wakes and funerals, and serious lack of sleep due to a demanding work schedule. Somehow all of those emotions got wrapped into these binders, and I was crushed.


I knew the binders couldn’t be saved – there were thousands of pieces of paper, many of them in sheet protectors that were now literally full of water. The ink had dripped and smudged and the newspaper articles couldn’t even be unfolded without ripping them. Worst of all, I hated myself that I even cared so much. Especially when I knew what other families around me were dealing with. These were just some stupid binders.

With the help of my father-in-law, Paul, who always comes to the rescue at those types of moments, we dried up the basement and moved on. But I couldn’t part with the sagging soggy box of binders in my basement, and every time I saw them, curling up as they tried to dry, I choked up.

At the time of our basement flood, Rachel was living in Boston and working a temporary job until her law firm job began in January (most firms had delayed the start times of their new associates because of the lagging economy). She would spend that Christmas with us, then head back down to Virginia. That holiday season was bittersweet knowing that she’d move away again afterwards.

Christmas is a big deal in my family. We are religious in our own way – not in the going to church way, but in the stopping-to-appreciate-how-lucky-we-are-to-have-each-other way. We’re all giddy around this time, even as we keep getting older. We try to find just the right gifts for each other, and we can’t wait to watch each other open them.

Anyone who knows my sister knows she loves jewelry and even though I can’t really remember what she gave me for jewelry that Christmas morning in 2010, I’m sure it was beautiful and far too generous. But clearly that gift paled in comparision to what else Rachel had in store for me. When all of the craziness of gift-opening was done, Rachel and Matt emerged with a big waterproof plastic box. Full of ten binders. Aside from my shock when the doctor told me I had a baby girl, I have never in my life been so surprised, so happy, so grateful, so speechless. Rachel handed me binder after binder and I touched each page as if it were gold. Then my whole family, who too were bursting to explain Rachel’s secret project, started to tell me what Rachel had done. Over the few months prior, she had taken one binder at a time out of my basement. And wet page by wet page, she photocopied each one into a dry version. Through eBay, she found and replaced each damaged magazine and she retyped pages of my own notes that were smudged and barely legible. She found archived newspaper articles and printed them onto crisp clean paper.  She bought durable new binders, made tab dividers just like I had had them, and created covers with a map of each region or topic. Over what must have taken hundreds of hours, Rachel recreated something that I never in my wildest dreams thought could be fixed.

I don’t know if I will ever use those binders again, and I’m sure Rachel knew that as she stood at the copy machine for hours. But that box in my basement is something so much more to me. It’s proof that my sister will do anything to make me feel better, even if she doesn’t fully understand it. It’s proof that page by page, day by day, and month by month, some things that were once destroyed can be put back together again. If you have people around you who love you enough to help.
Posted by Tara at 9:04 AM