In August 2011, while my family and I were on vacation in Jamestown, Rhode Island, I got a work email that I fretted about and then decided to ignore. The email was blasted to associates like myself who had worked with pro bono clients out of a health care clinic in a tough area of Boston. The work was part of a program that connected medical and legal professionals in their work for low-income patients and clients. A potential client, a 45-year-old Vietnamese woman (let’s call her Julia), was dying of breast cancer and she needed legal assistance. Back in August 2011, Julia’s doctors gave her no more than six months to live. I read the case summary and my heart ached. Several times I drafted an email saying I would take the case, but I never sent it. Mostly because I thought that I could never emotionally handle it.

A few days later, another associate with whom I had worked on a different case (let’s call her Lisa) emailed me to ask me if I would join her on Julia’s case. Obviously Lisa was stronger than I. I fretted some more. And then I said yes.

From August 2011 through July 2012, Lisa and I worked tirelessly for Julia, her two teenage children, and the children’s father. (I refused to leave the case when I switched firms so I continued to work with Lisa as if I had never left Ropes.) Without going into detail, we worked to ensure that when Julia passed away, her children would not be left alone. We were relentless in our effort; ultimately reaching Senator John Kerry’s office for some much needed (and much appreciated) pull. After literally hundreds of hours of work on a route that at first seemed impossible, we succeeded and our client was overjoyed. Just this past July, I had to complete a self-evaluation for my annual review at Verrill Dana. I wrote about our success on Julia’s case. I described it as my proudest accomplishment as a lawyer. It really is.

When I was diagnosed, however, everything about my relationship with this family changed. I couldn’t talk to Julia or her family despite that I cared about them so much. Somehow I got through a conversation early on about my condition but I don’t know how I did it. Because thinking about Julia, never mind speaking with her or her family, brought forth my deepest fears, and I couldn’t even begin to tackle those. Lisa, being the hero she is, powered on. She helped the family with some very important remaining issues. But to them, I fell off the face of the planet. Until last week.

Last week, I heard that Julia was not doing well. She continues her weekly chemo regimen at Dana Farber, but years ago her cancer spread to her lungs and her brain and although we had never talked a lot about clinical details, I knew from the start that her time was limited. I decided I wanted to see Julia and I arranged to visit her at her home. Today was the day of my visit.

Most of my walk this morning, I thought about Julia. How scared I was to face her; how sad I was to say goodbye. Nonetheless, I packed my car of goodies and headed into Boston.

The doorbell didn’t work, and at first, I was nervous that I got the time or the date wrong. But finally, Julia’s friend came to the door. Julia’s family was there too; two of her cousins who had never been to Boston. Julia always wears her wig, but when she saw me wigless, she took hers off and laughed. She didn’t put it back on until we left the house. I loved that.

Julia can’t speak any English, and I sure as heck can’t speak any Vietnamese, so we usually communicate with a translator on speakerphone, as well as with lots of smiles, nodding, hand holding, and (at least once every encounter), tears. Today we spoke through Julia’s lovely cousins and friend whose English was excellent. From their small apartment in Dorchester, we caught up about the last few months over some water and fresh grapes. We laughed and like she often does when we’re sitting next to each other, Julia held my hand. I wasn’t nervous or scared or sad as we joked about our matching bald heads and my fake boobs. Despite her nosebleeds, headaches, and extremely frail frame, Julia was so full of life that her energy was contagious.

An hour later, the family asked if I would join them for dim sum. I had heard of dim sum but I didn’t really know what it was. Of course, I said yes, reminding myself that even as I try to follow a cancer-killing diet, I can always find something I like to eat. So I moved the car seats to my trunk and after a bunch of group photos in front of my car (it was very important that my Toyota Venza be in the picture), we all loaded in and we were off to lunch. When we arrived at the restaurant just a few blocks away, we were immediately served this feast: 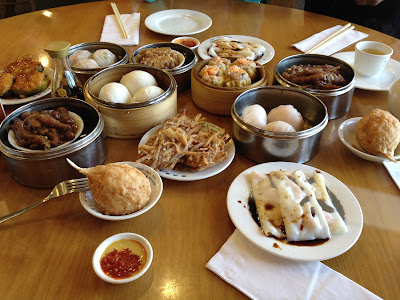 To be perfectly honest despite how ethnically immature I sound (and despite how beautiful it looks in the photo), I was slightly horrified by the food. I tried not to gag as I ate different forms of ground shrimp and pork in textures my mouth had never before experienced. There was no possible way to move the food around my plate to pretend I was eating it. My hosts watched my every move and I could tell how offended they were going to be if I didn’t eat. So I ate and tried to distract myself with our conversation. (The table erupted in laughter when I asked them which dish was the dim sum. I’m such an idiot.) Despite my lack of dim sum love, and the terrible indigestion that I have experienced ever since (Brian informed me of that common chemo symptom when I told him I thought I was having a heart attack), we had such a great time.

Our lunch conversation had revealed that Julia had no way to show her cousins any part of Boston (she doesn’t drive). So I decided to take them down the street to Castle Island. As we drove past the Boston Globe and Boston College High School, the Vietnamese conversation grew louder and more excited. Anything that said, “Boston” on it was something special, and we had to take pictures.

We stopped at Carson Beach so that Julia’s family could get out and take more photos of each other. It was windy and cold so Julia and I sat in the warm car together. And when everyone was out, Julia tried to speak to me. When she couldn’t find any English words, she pulled out a small notebook and wrote. I saved the piece of paper: 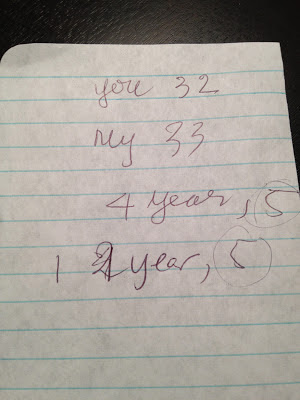 With an innocent smile, Julia explained that she was 33 when she learned she had breast cancer. I could tell that she wanted to know my age so I told her. Thirty-two. Then she explained that her daughter was 4 years, 5 months old, and her son was 2 years, 5 months old when she was diagnosed. I nodded in agreement, crossing out the “2” to explain that Annabel was only one and a half. We smiled and laughed. Not because it was funny, but because we were bonded.

When Julia’s family got back in the car, energized and warmed by tourist fever, Julia asked them something in Vietnamese. She wanted to know if my cancer was on my bone. I explained that it was not. I looked at her as I spoke a language she didn’t understand and told her that my doctors were able to remove my cancer. Julia listened to the Vietnamese translation and smiled at me and held my hand tighter. “Yes, good!” she exclaimed. Then Julia’s cousins explained to me that Julia’s tumor grew on her bone. It quickly moved into other bones, then into her lungs and her brain. But somehow, Julia kept smiling, and then she wanted to see more of Boston. So we drove on to Castle Island.

It was even more windy and cold down there, so our walk out to see Logan Airport was brief (and my offer to buy them ice cream was rejected). We took lots of pictures, which I won’t share only because I never found the right time to describe my blog to Julia and ask her if it was OK that I make her name and face public here. When I dropped everyone off, they spent 15 minutes giving me a big bag full of all sorts of natural remedies for my cancer. Then after several hugs, I drove home.

Shame on me for thinking that today would be about goodbyes. It wasn’t at all about that. I’m not sure how long Julia has left on this Earth, but I can tell you that that’s not what we were thinking about today. Instead, we watched the airplanes land over Boston Harbor as Julia and I worried that the other was too cold. And for the first time in all of the times over the past year that I have met with Julia, we didn’t cry once. There was way too much to be happy about.
Posted by Tara at 10:19 PM