I felt my tumor for the first time on Friday August 3, 2012. That night, Brian had his annual Canton High School hockey alumni barbecue. One of Brian's fellow coaches, and one of his closest friends, Corey, came to our house for the event. Corey brought his adorable little two year old, Keegan. When I gave Corey a hug to welcome him, I asked him the first question I always ask him -- How's Kristin doing? Kristin is Corey's lovely wife, and one of our dear friends. Back in August, she was a few weeks into her chemotherapy treatment for her breast cancer, so we had been thinking of her often. Corey gave me a quick update and I realized it had been far too long since I'd seen Kristin. Over an hour later, we decided that Teddy and I would drive Keegan home so we could visit with Kristin and meet Keegan's new baby sister, Emma, one of the most beautiful babies I have ever seen. This way, Corey could spend some relaxing time with Brian and their former players and Kristin and I could have a few minutes to catch up.

I remember driving over to Kristin and Corey's house. Keegan was so adorable chatting in the back with Teddy. Up front, I listened and smiled, while I worried that it would be strange to see Kristin bald. I had not seen her that way yet. I hoped I could fake a positive reaction if in fact it made me really sad. I assume that's what some people are thinking about me now.

When I saw Kristin with her pink scarf on her head, it wasn't strange or sad at all. Without an ounce of make-up, she looked gorgeous. We chatted, and watched the boys play together. We talked about her treatment, and as she always does, she totally downplayed her own strength and courage. I tried to remind her how incredible she is, but she's too modest and humble to really see it.

Every Friday afternoon after wrapping up her kindergarten classes, Kristin drives into Dana-Farber for her chemo. She has four treatments left. I don't know how she does it all, especially with a two year old and a newborn, and with almost no other family in the immediate area. She is one of the strongest people I know. When I left Kristin and Corey's house on August 3, I remember feeling so thankful to call such a remarkable woman my friend, and every day since, I've felt the same way.

After the "hockey guys" (as Teddy calls them) left the alumni barbecue that night, Brian and I watched our Tivo-ed Olympics. And for the first time, I felt my breasts for cancer.

I felt the lump in my left breast almost immediately. It wasn't absolutely obvious, but what I felt in the left one I did not feel in the right. I asked Brian what he thought. He didn't like what he felt (insert joke about small saggy boobs) and told me I should make an appointment to have it checked out.

That Monday morning, I called my primary care physician (let's call her Dr. Thomas). Dr. Thomas was on vacation that week so I scheduled an appointment with another physician for that Friday. On Monday night, while again watching the Olympics, I sat there feeling the lump. I got more nervous, and so did Brian. So on Tuesday morning, I called the doctor again and asked for an appointment that afternoon. Brian came with me to my 2PM appointment, and that is the day I discussed in my very first blog entry. We left the doctor's office on Tuesday thinking I had a benign cyst. The next day, the radiologist told me he saw cancer.

I have always been somewhat of a hypochondriac, and a strange one at that. I usually assume the worst (for example, a headache must be a brain tumor), but I don't rush to the doctor with my symptoms. I just torture myself internally and usually, the symptoms subside. In the instances when they haven't, I reluctantly carved out a morning to visit Dr. Thomas. Inevitably, Dr. Thomas would be an hour late and then I would wait in the exam room for another half hour. My blood would be boiling by the time she came in to examine me, mostly because I would have missed the commuter train that I had planned to take to work. I'd already be irritable because I would have stayed up extra late the night before to get work done that I knew I wouldn't be able to do that morning. But I'd still be nice when she came in because I needed her help. (By the way, Dr. Bunnell usually keeps us waiting for a short time. I am completely forgiving of that, however, because he spends such quality time with me that I know he's late because he's probably doing the same with another patient. I can't say the same for Dr. Thomas, so I just get mad.)

Usually, Dr. Thomas attributed my condition to stress. I would try to tell her that I wasn't stressed. She would nod. It never felt very productive and we never really clicked. But I usually left feeling better that I got whatever it was checked out. If it was something serious, she would have found it, I would tell myself.

Last November, I had a yearly physical with Dr. Thomas. She did a breast exam. She never felt a tumor, and I am not implying that she should have. My cousin who is a physician said you can't feel a tumor less than 1 centimeter in diameter. Mine was 1.2 centimeters when Dr. Nakhlis removed it, so perhaps it wasn't big enough to feel last November. Still, it's unsettling.

In my first appointment with Dr. Bunnell, he mentioned that breast exams are no longer recommended. At the time, I didn't ask any questions. Brian, my Mom, and I talked about this on the way home that day. It didn't make any sense to us. At a later appointment, my Mom returned to the topic. How could breast exams not be recommended? Doesn't Tara's story prove they should be? In a nutshell, Dr. Bunnell explained that a study showed that breast exams don't increase survival rates. Instead, they cause women lots of anxiety and false alarms. Dr. Bunnell said that was his official answer. But he continued to explain that in his opinion, if a woman can do exams without causing herself anxiety, if she can become familiar with how her breasts feel so that she could notice any changes, then he thinks it's not a bad idea. When I told him that I found my tumor on my first self exam, he told me that was unbelievable. I just smiled, because no matter how unbelievable, I knew it was true. A miracle. And most of all, a life-saving gift from Kristin.

I sometimes think my hypochondria helped to save my life, too. But in a way, that's made it worse. Especially since the genetic counselor told us that I may carry a gene that could cause childhood cancers in my kids. Talk about unsettling. So yesterday morning when Teddy woke up unable to walk on his right foot, it's no surprise where my mind went. Inside, I was a wreck. Despite that we had planned to go to the rink for a skate-a-thon to support my fight, and that I was planning to visit with my fabulous neighbors before they headed out to the Susan G. Komen Race for a Cure wearing "Team Tara" shirts, we took the first urgent care appointment we could get.

At that appointment, we met the best pediatrician I have ever seen in action. For the first time, my kids both laughed in the exam room (they usually are screaming and crying before the doctor even enters). Dr. Midura told us that Teddy has Severs Disease. The word "disease" makes it sound a lot worse than it is. Essentially, it's bad heel pain in growing and very active kids. Motrin and rest should make the little guy feel better. It was so sad to see Teddy literally crawl and crab-walk around the house, unable to put any weight on his foot. But this morning, he walked slowly from his room to ours, and told us that it's feeling better. Thank goodness.

Yesterday I also decided to switch the kids' regular pediatrician to Dr. Midura. The kids' doctor was fine, but when I called him about a month ago to tell him about my diagnosis and to ask him to just keep it in the back of his mind, he could barely have a normal conversation. He couldn't even find it in himself to say, "I'm so sorry to hear that." It was awkward and I was not impressed. In a completely different experience, as we were getting Teddy's shoes back on at the appointment yesterday, I told Dr. Midura that I'm a bit paranoid lately. She looked me in the eye and said, "You don't have to say anymore." I knew she understood. She went on to talk about bone tumors and leukemia in kids and told me that if his pain doesn't subside, we should definitely bring him back. Despite using those words I dreaded most, she comforted me. And she even hugged me when we left. She was wonderful.

Now that I've seen firsthand how great doctors can be, I'm done with mediocre and awkward conversations. I'm going to find a new PCP for myself, and we're switching the kids to Dr. Midura. No more feeling guilty that I may hurt someone's feelings. I'm done with that too.

I felt so much better with Teddy's Severs diagnosis. Until dinner time. As Teddy ate his grilled cheese, we examined his foot again. And we noticed a faint layer of blue on it. My heart jumped to my throat. I grabbed the phone and ran up to our bedroom to place a call to the on-call doctor. I could barely breathe I was so nervous.

When I went back downstairs, Brian was sitting next to Teddy on the couch with a wet paper towel. He rubbed Teddy's foot and showed me the towel. It was blue. My heart returned to its place in my chest. We laughed, and looked across the living room floor to the hockey dry erase board and blue marker that Teddy had been using as he played with his Hockey Guys earlier in the day. I called the on-call line back again and cancelled my request. The woman laughed at me when I explained it was only marker. I'm a little paranoid lately, I explained. She had no idea why, but that's OK. Because all that really matters is our little ones are healthy. And so are we.

I am so hesitant to use this space as a way to thank people for their never-ending generosity because there is no way I could do everyone and every thing justice. Nonetheless, I want to thank everyone who skated, baked, walked, and supported us in so many ways yesterday. You are our angels and we are forever grateful.

I loved these photos from the skate-a-thon and thought I would share. 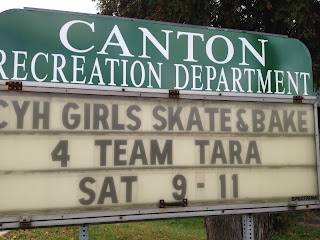 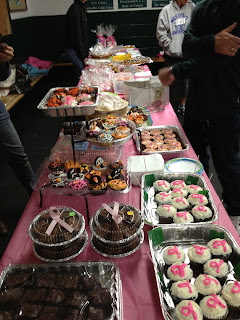 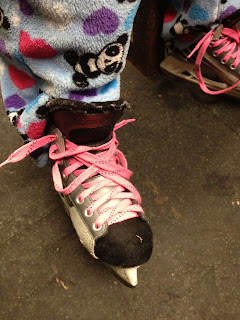