Back in August, Brianne bought me the famous yellow Livestrong bracelet, as well as a Livestrong sweatshirt and several t-shirts (including my favorite Battle Mode shirt that I wore to Faulkner for my surgery and to Dana-Farber for my first day of chemo). I have worn all of my Livestrong gear with pride since then. In fact, I didn’t take the bracelet off except on the day of my surgery. Until this week.

From my cancer cocoon, I admit that I haven’t been great at following the news. But still, I have heard bits and pieces of the never-ending saga with Lance Armstrong and doping. This week, I heard that he stepped down as Chairman of the Livestrong Foundation and that Nike, whose symbol covers lots of Livestrong gear, ended its relationship with him. When I heard that, I thought that the bracelet had way too much of a mess attached to it. I don't know all of the details about the doping scandal, but I was mad at Lance Armstrong for what I did know. Sure, his cancer survival story was still very inspiring, but it was just too tainted, and I wanted a bit of distance between myself and my Livestrong bracelet. So I took it off and put it in my jewelry box. But right away, I really missed it.

Then yesterday I read a recent article by Bill Saporito published in Time magazine (linked here). The following paragraph changed my thinking:

Livestrong is about hope. And as anyone who has ever been given that terrible diagnosis knows, people who have cancer need to have hope. Desperately. For me, the yellow band symbolized it in ways I couldn’t quite fathom, but the attraction was instant. It connected me to the more than one million Americans who would get cancer that year, and every year since. …

I admit that at this point in my journey, I'm not looking to be connected to a large cancer community. I love the community I have now and it never feels like I have enough time with those friends and family. But I know exactly what Mr. Saporito, himself a cancer survivor, was talking about when he talked about hope. Especially with that word, “desperately.” When I put that Livestrong bracelet on for the first time, it was at a point in my life when I desperately needed hope. It was at a time when I knew that my cancer was aggressive, but I didn’t know how far it had spread. When I thought that I might be too sick to enjoy my kids’ next few birthdays, and that I may not even see the ones after that. "Desperately needing hope" was an understatement. Many moments during that time, I just tried to breathe and eat and stand up straight. But somehow, that little yellow bracelet helped. Those two words helped.

Live. Strong. Those words helped me arrive at the mantra that I still repeat every day, especially in those moments when I feel completely overwhelmed by fear and uncertainty – I am here now. Live. They helped me last Sunday when I was hunched over the kitchen sink praying for my nose to stop bleeding. Strong. In those moments, I’m not thinking about Lance Armstrong. I’m not thinking about any cycling titles or doping allegations. I’m thinking about the fact that at that moment, I am very alive. At that moment, I'm flexing every hope muscle I have to try to be strong.

After I read that Time magazine article, I went back upstairs and put my bracelet back on my wrist. And since then, I’ve thought a lot about it. Here’s what I’ve decided.

So many of us wear symbols on our bodies, our clothes, our bags, or whatever. We think we know what other people's symbols mean, but so often, we don't. Does that pink ribbon mean she's a survivor? Does it mean she lost her mother to breast cancer? Does that green number 5 bracelet mean that kid thinks about Scotty as much as I do? Does that yellow ribbon mean her husband is serving abroad? Does that Livestrong bracelet mean he has cancer? Most of the time, I have no idea. But I constantly fight the urge to boil down those symbols to something simple. I constantly have to remind myself that in reality, each one of those symbols tells a long and complex story unique to each person who is wearing it.

My Livestrong bracelet is not about Lance Armstrong. In fact, it's not even just about cancer. For me, that yellow bracelet is about people who stand up in the face of adversity and decide nothing’s going to keep them down. Sometimes those people are athletes, but for me, a lot of the time, they're not.


I put my Livestrong bracelet back on for people like Brendan Burke. I never even had the pleasure of meeting Brendan, and Brendan did not have cancer. But years after his tragic death, Brendan continues to inspire me. I met Brendan's older sister, Katie, when we were in high school and we have remained friends ever since. Katie sat with me for hours one August afternoon shortly following my diagnosis. For most of the time, we caught up about brainless fun stuff. But we also talked about Brendan and cancer and fear and pain.

I would be a fool to try to sum up Brendan’s life here because there’s no way I could do it justice. A few articles, including this one by ESPN journalist John Buccigross start to scratch the surface of this incredible young man, but I think it’s probably impossible (especially for someone outside of his family) to give Brendan’s courage and strength its due. Brendan lived strong, and after his passing, his legacy and his remarkable family continue to live strong. Brendan left this world a better place in so many ways, including by being the first to stand up in the hockey community and say he was gay. Katie supported Brendan from the day he was born and when I first met her, we bonded over how much we loved our siblings. I don't know how I'd go on if I lost my brother. But Katie does, and she does so with grace and kindness like no other. Katie lives strong.  So I wear my bracelet for Katie and for Brendan.

I wear my bracelet for these nine students who lived strong by risking their lives so that black and white students could sit side by side in a classroom. 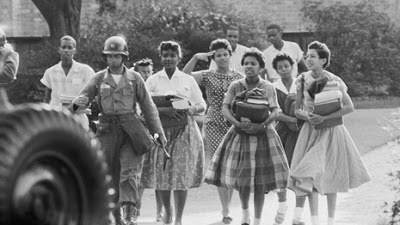 And I wear my bracelet for women like Gabby Giffords who literally fought for her life when news stations had already announced her death; who encouraged her husband to follow his dreams back into space despite that she was still recovering from a gunshot wound to the head.

It's easy to get selfish in my cancer cocoon. To start to think that the universe revolves around my battle. When that happens, my Livestrong bracelet reminds me that the universe is much bigger than my individual fight. It reminds me of my friend and her brother who changed the lives of athletes and fans everywhere by saying that gay people can play too. It reminds me of people in history who brought about great change by walking into a school or refusing to get up from a seat on the bus. It reminds me of people who fight for their lives even when others already thought of them as dead.  These people live strong and they inspire me to try to do the same. They are why I wear my yellow bracelet.
Posted by Tara at 1:22 PM