I stopped drinking water yesterday after Dr. Chun told me that my left-side incision wasn't ready for chemo today. I was only four glasses deep. "Necrosis" is the official reason for the week-long delay (something about premature death of body tissue). As you know, I adore Dr. Chun, and because of that, I nodded calmly as she pointed to the small area of necrosis and explained, "We don't want to take any chances." But inside, I was so sincerely disappointed because I felt so ready to tackle this next step. (I should not have just used Google for a spell check on necrosis because even the little I just read about it rose my blood pressure a notch. Then again, without Google to correct me, I would have told you I had "narcosis" and that definitely wasn't the concept I meant to convey.)

I'm scheduled to see Dr. Chun next Tuesday to (fingers crossed) get clearance to start my treatment on Wednesday October 10th. So I have a whole week to wait while I apply some other cream to the incision and hope that it heals properly. And worst of all, during that time, I'm supposed to "take it easy" and not reach my arms up or lift things. But that's so much easier said than done. Because I just don't have it in me to ask someone to help me take my food in and out of our microwave that is mounted over the stove. So we'll see how that goes.

It didn't take me long to recover from this disappointment, although it surfaced in short, relatively painless waves last night. On the way home from Dr. Chun, Dr. Bunnell's P.A., Danielle, was very kind in explaining to me that this is just an important precaution so that the open wound or a potential infection doesn't plague me through chemo when my white blood cell count is too low to heal this spot. Danielle also calmed my fears over the fact that I had already (in my over-confident state) taken the steroids that Dr. Bunnell prescribed me for the morning of the day prior to my treatment. He had explained that these steroids help ensure that fluid doesn't collect in places that it shouldn't (like my lungs), which is apparently a possible effect of the drugs. I was relieved when Danielle said it was fine that I took the two pills and the only issue is that I may have trouble sleeping that night. Luckily, that's a problem every night, so no new issue there, I responded. Plus, an Ativan will help, she said. The bottom line is that waiting a week (or even a few weeks) doesn't pose a threat in any way. Aside from making me want to freak out and throw stuff.

On the way home from Faulkner it poured, and my Mom and I did our all-too-usual self-pep talk, listing all the reasons that this really isn’t a big deal, despite the understandable frustration. We gained some perspective by reminding ourselves that so many people need to return for follow-up surgery (or surgeries) and I am so blessed that I did not. My favorite (most ridiculous) reason that I invented is that it's a good thing that I have dead tissue on my left boob. That was the whole point, right? We felt fine by the time we got home and we were even happier when we learned that Helen and Kirsten, who had planned on coming this Thursday and Friday to keep me company while my Mom was at work, decided that they would still visit despite the change in chemo plans. So I'll have company later in the week while this waiting game continues. (Yes, I do still need to work on that alone thing, but again, baby steps.)


After we picked up the kids, we hung up the Halloween decorations and that helped a lot, too. They were so excited about the lights shaped like ghosts and pumpkins, and Annabel spent all night running up to them lit on the mantle and giggling.

Later, Annabel instructed me to “sit” so we could draw some pictures. I was hesitant to post the following photo because I honestly didn’t think anyone would believe me, but I swear to you, this is the first thing she drew – “Mommy,” then “Daddy.” I knew she had been working on “family portraits” at school because today Annabel’s teacher emailed me a picture of another one. And I know that her teachers are fabulous, but had they really taught her about the symbolic pink ribbon? I doubt it, and even if they did, the "Daddy" part proves her level of crayon control, so I’ll just take this drawing as a great omen that everything really is going to be just fine. 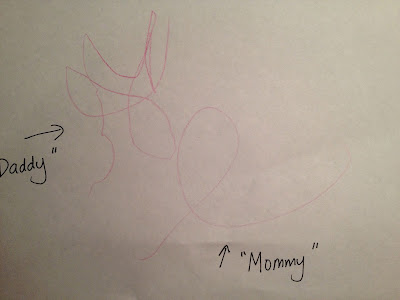 So now, in another true test of my patience, I'll settle into a second holding pattern. I will keep reminding myself that this one is not even close to as bad as the first one, because this time I know much more about what we're dealing with. Plus, I learned yesterday from an incredible friend who has been kicking her own cancer's ass that often, patients show up for treatment and are sent home when their white blood cell counts are too low for more drugs. In an unexpected way, this helped me so much. Because I realized that chemo isn’t the set-in-stone schedule that I had thought that it was. It's just another part of this journey, and although the route may shift every now and then, the path will still end at my cure.

On the way home, I thought about the virtue of patience, because clearly, it's not my strength. And like I do so often lately, I started to think of examples from which I could draw some of that much needed patient power (pun intended). I immediately thought of this one.

The Sunday before last, my Mom took Teddy to King Richard’s Faire so that we could get a bit of rest. (Instead, Brian and I ended up taking Annabel to the Life is Good Festival, because it was far too beautiful of a day to just rest.) On the way home from his adventure, Teddy asked my Mom to take him back to the bead store so he could make a Halloween necklace. Brian and Annabel were napping, so my Mom and Teddy picked me up.

A kind middle-aged woman (let's call her Mary) runs the small shop, and clearly, Mary is passionate about her beads. So was her enthusiastic co-worker (let’s call her Lucy) who immediately took to Teddy and generously showed him lots of beads for his necklace. (At first, I cynically wondered if Lucy was showing him all of the most expensive beads. Then I realized that I can be such a jerk, because she had only good intentions, and in the end, Teddy found the $5 beads with only his own expensive instincts.)

Probably the most impressive thing about the bead store is that next to each of the hundreds of small bead boxes is a tiny piece of paper with the name of the bead and the little scan code for that particular bead. The proper bead purchasing process would be to take a bead out of the small box, remove the corresponding piece of the tiny paper, and place both in a small individual plastic bag. But I somehow missed these instructions, and shockingly, so did Teddy. So for at least a half hour, Teddy wandered around the store piling beads into his basket and usually neglecting to take the little labels or bag them separately.

When it was time to pay, things got interesting. It took about 10 minutes to unload the basket and start to identify which beads were label-less. Then the very sweet Lucy started to scan while Mary tried to figure out the prices of the remaining 30 or so beads. About 15 minutes after that, the computer crashed. Yep, the whole scanned order was gone, and Lucy was so apologetic about the fact that she had to unload the packed bag and start all over again. At this point, I was so sore that I needed to go to the car to lie down. I thanked Lucy and Mary and exited with my perfected technique of opening heavy doors with my foot. Twenty minutes later, Teddy joined me. He told me, "The ladies are still putting the beads in the bag.” Another twenty minutes after that, my Mom walked out of the store, beads in hand, head shaking. And to my utter surprise, she was laughing.

I felt so badly that it had taken about an hour of her precious time to pay for Teddy's Halloween necklace (which is still yet to be strung together, by the way). I asked what had happened that could possibly have taken so long. The computer crashed again, and then again, my Mom explained. My Mom said she thought about offering them $100, which would certainly cover far more than the order, just so she could get the heck out of there. But she didn’t, because she could tell that Mary and Lucy had their bead selling system, and as much as that system crashed (and burned), they wanted every happy bead to leave the store after having been properly cleared through the system. And despite that my Mom had work she needed to do at home, and a hundred other reasons to feel irritable and impatient, she was still laughing.

Patience doesn’t always come naturally to me. And I know my Mom probably wanted to freak out upon the third computer crash at the bead store. But she didn’t freak out, and neither will I. She waited, and she waited, and she smiled and laughed. And thanks to a lifetime of watching her react so gracefully to big issues (including me getting cancer), or small ones like checking out at a bead store, I too will wait, and smile, and laugh.

Last night, after the kids went to bed, I enjoyed a small cup of Edy’s slow churned ice cream. Even without the chocolate sauce and the Cool Whip, it was delicious. And as I took my first bite, I declared, F-U necrosis! Then, I went to sleep.

My lovely friend, Anne, introduced me to this song last week. For some reason, it feels perfect for an entry about patience.