About a month ago, Annabel and I were enjoying a visit with our neighbors while they waited for their school bus. The kids were playing in the driveway as I chatted with one of the nicest people I’ve ever met, my neighbor, Debbie. Like often happens with outside playtime, smiles quickly turned to tears when Annabel tripped and went face first into the pavement. And like I usually do when she falls like this (at one and a half, it's pretty common), I faked a calm demeanor as I tried to find the cut that was causing blood to ooze out of her mouth. It wasn’t a bad fall, but Annabel was hysterical, mostly because of the blood. So I scooped her up (this was back when I could do that), and we headed home for a cold washcloth and “bumble bee,” the little bee-shaped ice pack that Annabel likes when she’s hurt, even though she just carries it around in her hand.

I remember that feeling of being completely overwhelmed as I carried Annabel back to the house. Brian was already at school, but Sean had stopped by before he headed to work. I brought Annabel into the house, blood from her mouth now mixing with her boogers and hysterical tears. Then she saw Sean. “Un-coe!” She exclaimed with glee. Not another tear was shed. I put her down so I could grab a wet washcloth to clean her up. She smiled at Sean, and ran in the other direction, like she often does, with the clear message of, chase me and play with me! So Sean chased her and played with her and after I cleaned up her mouth, I don’t think she ever remembered that she had hurt it.

Annabel absolutely loves Sean. At night, she often hands me the phone and says, “Un-coe,” clearly instructing me to call Uncle Sean so she can smile with the phone pressed between her shoulder and her cheek. Sean asks her how her day was (even though often, he had seen her) and she immediately replies, “Good.” Sometimes she brings things over to the phone as if she is showing them to Sean. Sean asks more questions, Annabel babbles, then Annabel declares, "Night night."

Last night after Sean, Lauren, Kirsten, Brian, the kids, and I all went bowling, Annabel spent the whole ride back asking, “Where Sean cah?” She just learned to say “Sean” and she was very concerned that he was not driving his car directly in front or directly behind us on the trip home. Annabel always wants to know the exact location of her Uncle Sean.

The truth is, so do I. Sean is seven years younger than me, and until the last five years or so, that difference mattered more. He was in high school when I was starting my first job; he was in college when I had Teddy. But after he graduated from college and moved closer to home, Sean became one of my best friends. When we moved into our first condo, he spent days helping Brian and Paul lay down snap-together hard wood floor. When Teddy was born, he surprised me in the hospital by flying up from school in Miami to meet his new nephew. When I found out I had cancer, he was one of the first people at the door, and he’s been here almost every day since. And when I set up my blog, he did all sorts of technical things to secure me a website and make sure everything was working properly.

Sometimes I think about why Annabel is so obsessed with her Uncle Sean. I’m sure it’s partly the simple things – that Sean lets Annabel climb on his back while he acts like a horse, or that she can feel how much he loves her and can’t help but reciprocate it. Also, although it may sound ridiculous because Annabel isn’t even two yet, I think it’s also because the two of them have such similar personalities. They both have older siblings that are often far too serious, so they’ve learned to laugh more to lighten everyone’s mood. They both have boundless playful energy, and unwavering patience. Sean will spend hours assembling a piece of furniture or fixing something wrong with my computer, without ever seeming frustrated by setbacks, and Annabel will do the same when trying to get her own pants or socks on. (She’s in a getting-dressed-by-herself phase and if we try to help her she yells, “I can do it!” So we let her try. Probably best too, because when Uncle Sean babysits Annabel alone, her diaper always ends up on backwards.) But for whatever reason, there are few things that make me happier than to know that these two have a very special connection.

Last night, before we all sat down to our family take-out dinner from Outback, Sean showed me two things he had been working on for me so that I could, in his words, get “pumped up” for chemo. The first was the mock movie trailer that I had to link below, because it is too funny not to share. Sean can always make me laugh, and this had me hysterical, but also in tears because he’s just so darn good to me. (By the way, please find the humor in this unless you'll chalk me up to the most conceited woman in the world.)

Second, Sean made me a 15-minute montage of kick ass movie moments. From Rocky’s speech to his son on the side of a dark street in Rocky V, to the world gathering to watch Bruce Willis destroy the asteroid in Armageddon, this montage was full of clips that had us roaring with laugher, and ready to take on the world at Dana Farber this week.

My incision is finally healing well, and I fully expect Dr. Chun to give me the green light on Tuesday to start chemo on Wednesday morning. So if all goes as planned, on Wednesday, Brian and my Mom will march into Dana Farber with me to meet my Allies. And Sean will join us. Because we thought the loading dose of a chemotherapy regimen could use some great energy like his. Those eight hours at Dana Farber on Wednesday could use some laughter and some kick ass movie montages. They could use someone a bit less serious and nervous than we all tend to be when we walk into that building (understandably so, I suppose).

It’s no wonder Annabel stopped crying over her bloody lip when she saw Sean that day. Because I know I’ll have fewer tears on Wednesday with my little brother sitting by my side. He’s just got that gift of being able to turn tears into smiles. Just another thing he has in common with his favorite little niece. 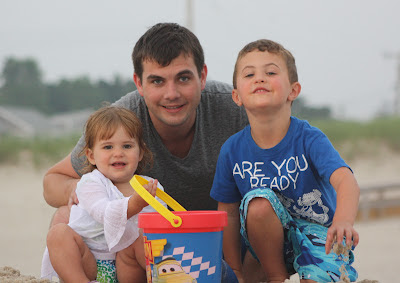