Since Brian is also sick right now (though he'll barely admit it), he has been kindly encouraged to stay away until he is well. It totally stinks, because I'd love to sit around here with him, but he needs to get better and so do I. At first I thought that meant he would go home and rest while grandparents, aunts, and uncles watched the kids. Then again, I should know my husband. Instead, he spent about four hours on the roof yesterday putting up Christmas lights. I like to call him Clark Griswold this time of year because he loves his outdoor Christmas lights, he has the never-ending patience of Clark Griswold while putting them up, and the lights usually don't all light up at first. But just like in the movie, they eventually do, and it's a beautiful sight to behold.

I also just saw via text message a photo of our new Christmas tree. Apparently Brian's efforts to fix the lights on our old tree were for nought, and he decided to start fresh. Hey, I'm all for getting rid of old, broken, and troublesome things and replacing them with fresh, new, and perkier ones. I can't wait to get home and help them put up all of the ornaments.

As I posted last night, Sean determined on his way out that our first goal of the evening was to fix the broken recliner and my second goal was to get one white blood cell. My Mom then added a third: To get a good night's sleep. Here's how we fared on these three goals.

The damn thing is broken. My lovely patient care assistant rolled another recliner in after she agreed that that sucker wasn't going to be reassembled by an amateur. This afternoon, we burst out laughing when we saw the chair in the hallway with a sign: BROKEN. Engineering called 11/24/12. Thank goodness for engineers. 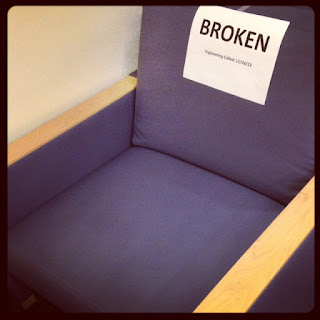 There is no where to go but up when you start at zero, and up I have gone. I may have this wrong but as I understand it, they somehow count the cells in a sample of my blood. I can go home when my count hits 5.0 (meaning 5,000 white blood cells) or maybe even 4.0. When I asked my nurse what we could expect today she said she really couldn't forecast it but she wouldn't be surprised with 2.5 or maybe even 3.0. I secretly hoped for 3.5. When it came back late this morning at 1.64 I was pissed. Seriously? A puny little 1.64?!? I'm going to be here a while, aren't I? I asked the nurse. She made one of those smiles that means, Yes, but I know you don't want to hear that so I won't say it out loud.

And so the day has gone on much like yesterday, although my caretakers are alternating at a steady pace. Brianne relieved my Mom this afternoon, then Sean and Lauren tagged Brianne out. My visitor usually stays long enough to get the full cycle that I can't seem to break -- a cool, happy few hours, and a feverish, miserable few hours. Brianne came in the happy part so we went shopping. Yep, back to the gift shop. No matter how many times I go there, I always find something fun. Today I bought "The Yoga Deck" which is a pack of 50 cards each with a different yoga pose and instructions. I still can't get over how much I loved the yoga event and I'm determined to learn more, even if it means I'm doing it in my hospital room connected to an IV. Brianne also found the cutest thing for her baby too but it's a stocking stuffer for Seamus so I can't reveal any secrets.

I have achieved this second goal of one white blood cell and have set a new goal for tomorrow. I want to hit 2.8 tomorrow and 4.0 by Tuesday. Then I hope to negotiate my way home on Tuesday night. That's my plan, anyways, but I can't believe I still even try to plan things when it comes to this process.

This I achieved, thanks only to Ativan. I haven't taken Ativan in a while, and save it only for those rare instances where my mind is in such a bad place when I'm trying to fall asleep that I think I could never do it on my own. But that only happens once every few weeks now, for which I am very thankful. Last night my Mom and I started that Hugh Jackman movie, Real Steel, which I must say, I was thoroughly enjoying before the Ativan dragged me into sleep. I may have to watch the rest of it tonight. Did I tell you that they have a bunch of good free movies here? Yep, one of the many perks.

Tonight Sean is going to take the spot on the recliner next to me. Brian had planned to, but I convinced him it wasn't a good idea. He has his first hockey try-out tomorrow morning at 5:30 and there's no way he should miss that or get up at 4:00 and commute out of Boston. He wouldn't take that for an answer so I played the you'll-get-me-sick card which worked much better.

I miss the kiddos terribly, and I can't tell if our frequent FaceTime dates are making that better or worse. Today when I talked to Teddy he asked me when I was coming home. He always takes a direct route to the most important question. I explained to him that I need to wait until the doctors tell me I can come home and they will say that when a magic number hits four. He asked where the number was now. 1.6, I told him, but I'm working hard to get it up to four as fast as I possibly can. He was satisfied with that answer, and gave me four kisses when we got off the phone to prove it.

I continued on through the day thinking that all was well at home until tonight when Brian told me that Teddy got really upset a few times today, crying that he missed me. I know most mothers would expect that after being away for a few days but it surprised me. Then it broke my heart. And then I felt pure rage at cancer. Rage like I have never felt before that something would hurt my family like this. It makes me want to cry and scream and punch something. But I'll remain calm if only because my head hurts too much to cry, my throat hurts too much to scream, and my arms are either hooked up to an IV or too sore to punch. Maybe I'll take Annabel's approach and kick someone's shin.

I worried when I sat down to write that I wouldn't have anything to say because I have basically done nothing since I wrote last. But clearly that's not the case, and I still have one more thing to share.

When I leave my room, it's when I feel good (when the fever hits, I still just curl up in misery on my bed). Yesterday I wrote about how pathetic I look when I go for a stroll and here's proof, from Brianne and my shopping excursion today: 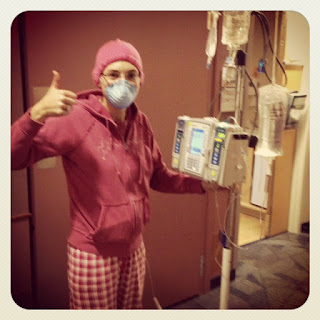 Ever since I went bald, I can tell that strangers look at me oddly (people I know are amazingly fine with it, which so impresses me). Maggie calls the strange look the "cancer smile" and it's that quick look of, Awww you poor thing, before they look away. The cancer smile isn't necessarily a bad thing, and I'm sure I flashed it more than a few times in my life. I assume it comes from a good place in someone's heart so I am appreciative of it.

Kids don't give cancer smiles. I love kids because they just stare. And stare and stare. The first time it happened, I was in Target by myself and I almost started to cry. I felt like a monster. But now I enjoy their innocent little stares. I smile and wave and if they're really puzzled, I say something like, Do you like my silly haircut? They don't usually answer, still stuck in their confused stare, or they just smile, but by then their parents are usually horrified so I stroll on.

I still haven't worn my wig even once, although not because I'm trying to make any sort of statement. It's just not me. A bonus of that practical decision is that I feel like it helps to demystify cancer; to show people that cancer patients do all sorts of normal things, like shop at Target. In all honesty, I sometimes forget that I'm bald. I'll catch my reflection in a door or a window and need to reorient myself to my new look.

With the surgical mask and the IV pole, I rarely even see the cancer smile. It's not because I can't see through the steam from my breath that has gathered on my glasses (could I be any nerdier?), but rather it's because most people just immediately look away. Plus, in the hospital, it's a pretty common sight, so maybe I don't even stand out. Sometimes when I walk by someone else in here with an IV pole I want to stop and cling the poles together like a little Cheers!  But no one else seems interested in anything like that. So I smile, then remember that they can't even see it under my mask.

On my first few strolls out of my room looking this pathetic, a really weird thing happened -- I started to feel as sick and frail as I looked. It was as if I got into a costume and couldn't help but play the character. But today, that changed. Today I realized the irony in the fact that I may look frail and sick, but when I'm up out of that bed, I don't feel that way. I feel liberated and strong. When I got several looks of pity today at Au Bon Pain, I wanted to tell those people, I'm way stronger than you think I am. Then I remembered that they really just wanted to buy their lunch and couldn't care less about my thoughts on my appearance.

I like that "Goals" board so here are my new ones. Exciting stuff. Signing off from the 7th floor of the Brigham. Good night! 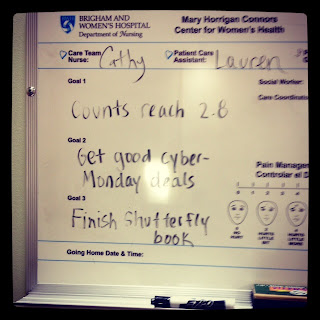