A few weeks ago, my Mom bought Teddy and Annabel a new kids book by Bernard Waber entitled, “Courage.” I love the cover illustration: 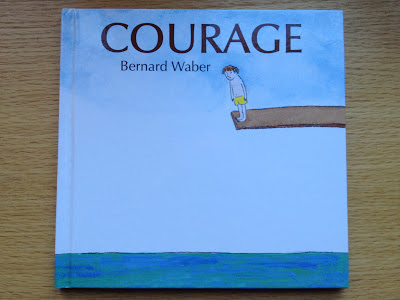 As part of the ridiculous bedtime routine that we endure, I mean, enjoy, with Teddy, we have read this book several times. (In true second-child fashion, Annabel’s bedtime routine consists of just, well, going to bed. We probably spend more time and effort putting Teddy down in one night than we have spent putting Annabel down in her entire life.) Anyways, the book is really cute, and every time I read it, I notice a different line and illustration that I love. For instance, one page that always makes me smile is page 22: “Courage is deciding to have your hair cut.”

This morning, after a relatively good night’s rest and with an extra hour thanks to Day Light Savings, I decided that we were all going to church. Excuse my French, but getting ready for church is always a complete shit show, and simple proof of how much I enjoy that one hour of peace comes by the very fact that every few weeks, I suffer through what it takes to get there.

After several temper tantrums, empty threats, and a few swear words, we were off to the “church with the yellow door,” as it’s known to many people in my town. To us, it’s First Parish Unitarian Universalist, and Brian and I started attending services there last year. My Grandma was a dedicated “UU,” and I always loved joining her on random Sunday mornings during the summers that I lived out on Long Island with her. At first, the little things impressed me – the relaxed atmosphere, the rainbow flag hanging outside the front door, the members' charitable efforts. As I learned a bit more, and especially when I became a parent, I became increasingly fond of the church’s message, which I think is best summed up by the congregation’s covenant that emphasizes things like love, truth, service, respect, freedom, and harmony – you know, all those things that Brian and I are screaming about as we threaten Teddy to get his a$% in the car so we’re not late.

This morning, I sat down in the pew and read the cover of the week’s Order of Service. I noticed the title of the day’s sermon: “Cultivating Virtue #2: Courage.” How fitting, I thought. I sure could use a dose of courage this week. I read the quote in large print on the front of my pamphlet. It was by Maya Angelou, one of my Grandma’s most favorite authors and poets:

I read it again and again. I liked the quote, but it didn’t sing to me like some quotes do, partly because I didn’t really get it at first. I could be patient, without courage, couldn’t I? I could be fearful but still kind, no? I tried to sort out the quote in my head as the service began.

Many UU services include a time for joys and sorrows. During this time, people stand up and share personal news with the congregation. Today, it seemed as if almost every person stood up to share a sorrow about the illness of a loved one. And I couldn’t help but notice that almost every illness seemed to be cancer. As I listened, I felt my chest hurt. I wondered if it was fear or anxiety or maybe last week's dose of Herceptin damaging my heart. (Since I learned that I’m in the small percentage of people who are allergic to chemotherapy, I have started to think I may be in the small percentage of people for whom Herceptin causes serious heart problems. Urgh.) I felt badly for each person who stood up to share a sorrow and for their loved ones who were clearly suffering. And selfishly, as I tried to convince myself that my chest was not tightening, I also felt sorry for myself. I hate that feeling.

I haven’t written much since I recounted my second attempt at chemotherapy. After I published my post about my terrible reaction, I hoped I would feel better. Unfortunately, I didn’t. My body was exhausted and sore – the exhaustion likely due to the powerful intravenous steroids wearing off and the soreness likely the result of the massive swelling that had occurred the day prior. But as usual, the physical issues were negligible compared to the mental ones.

The night after my reaction, I was in auto-drive; I think anyone with two young kids on Halloween would be. However, in the days following, after I dropped Teddy and Annabel off at school, reality started to set in. The reality that I am allergic to my chemotherapy. F-ing allergic to the drugs that are supposed to save my life. Damn it.

At first, I was numb with frustration. I didn’t want to eat or cry or scream. I didn’t even want to write. What was the point? I had nothing to say.

Then I got mad. I wanted to scream from my rooftop, What the f-uuuuu-*k? Then I got numb and tired again. It wasn’t a fun cycle of emotions.

On Friday afternoon, I had my follow-up appointment with Dr. Nakhlis, my incredible breast surgeon. My Mom and I grabbed a quick lunch before the appointment. We didn’t chat as much as we usually do. Neither of us was really in the mood, although we both tried to be. During our lunch, my friend Sara, who I’ve written about before emailed me about desensitization. She’s a nurse, and after I replied to her email, she ended up calling me. She told me that she often sees patients go through the desensitization process and that they do great. For the first time in days, I felt hope again, and my Mom did too. Nurses, and friends, hold that great power, I guess.

As we sat in the waiting room for Dr. Nakhlis, my cell phone rang and the much anticipated Blocked appeared on the caller ID. I knew it was Dana-Farber. As I slid my finger over the screen to answer the call, I prayed that the caller had an appointment with the allergist all lined up for me. I prayed that we had a new plan. But Dr. Bunnell’s nurse practitioner was calling to tell me that they were still working on scheduling the appointments and if I hadn’t heard from the allergist by noon on Monday, I should call Dr. Bunnell. The nurse was so kind and sympathetic about my allergic reaction but I only eked out a friendly tone in return, trying desperately to hide my utter disappointment at the thought that the long weekend was about to begin without a plan of attack.

Since then, the numbness has passed, and for the most part, so has my anger and frustration. This beautiful weekend, I enjoyed time with friends and family and I tried not to wish the days away. But still, a heavy fear has sat in the pit of my stomach. Embarrassment has loomed too. I know it may sound odd, but part of me is so embarrassed by the confidence and the fearlessness that I felt last week as I headed in for my treatment. I wasn’t scared as Karen loaded the Taxotere onto the hanger above my head and I may have even felt proud of myself for being brave. Now I feel completely betrayed by the very things that are supposed to help me. I sit here wondering if my Allies really are my allies.

I won't lie; this week absolutely terrifies me. I don’t know when I’ll be back in for treatment, which is part of what is so scary. But what’s even scarier is the thought that what happened before could happen again. It’s like I’ve written about before – it’s the fear of the fear that is the worst. Because I can’t imagine how scared I will be as I sit back and watch the Taxotere drip into my veins. As I wait to see if my body will violently reject it again.

So now’s the time where I try to convince myself that it will all be OK. In all honesty, deep down, I know that it will. I really do have faith in the desensitization team at Dana-Farber because I’m sure that they’re as good as all of the other people I’ve met there. And even if that doesn't work, I believe they can reverse the shock like they did the first time. I trust that there is a treatment out there that will work for me. Still, it’s scary, and I’ll give myself the time to feel that way.

Today at church, our minister gave lots of examples of courage. A lot of them reminded me of the book we’ve been reading to Teddy. As Bernard Waber wrote, there are “awesome kinds” of courage and “everyday kinds.” This week, I’m hoping I can muster up the everyday kind. The kind that will help me get up in the morning, kiss my kids goodbye while they're still fast asleep, and ride into Boston for a twelve hour infusion with the faith that drip by drip, everything will be OK.

You can practice any virtue erratically, but nothing consistently without courage. So true. Because in these last few days, when I’ve felt no courage at all, it’s been hard to practice anything else. It’s been hard to have faith and hope. It’s been a struggle to be generous. And it’s been impossible to write. But today, when the madness of a typical Sunday subsided, I found myself back at my computer. From here, I know that somehow in the next few days, I’ll find the courage for Round Two-B of my chemo, if only because I don't really have a choice but to. Maybe I haven’t consistently shown courage, but I have realized that sometimes Plan A doesn’t work out and it takes an everyday kind of courage to figure out, and accept, Plan B. And sometimes, the everyday kind of courage is also the awesome kind. In fact, maybe they’re the same thing after all.
Posted by Tara at 7:29 PM