"We often take for granted the very things that most deserve our gratitude."
-- Cynthia Ozick

Last Friday, a nurse from the desensitization unit at Brigham & Women's Hospital called me to discuss the tentative schedule for this upcoming week. She explained that she had spoken with Dr. Bunnell and they were making plans for me to undergo the desensitization process assuming that the allergy tests on Tuesday give us the green light to go ahead with the Taxotere. On Tuesday by 2PM, the nurse will call me to tell me if there is or is not a bed available in the Brigham ICU. If there is, they will admit me on Tuesday night to prepare for my treatment which will begin first thing Wednesday morning. If there is not a bed available, we'll repeat the same process the next day until a bed opens up.

The treatment will take all day, and should be complete around dinnertime. If I have a reaction it could take longer because this time, even if I react, it doesn't sound like we're stopping. Instead, the ICU team will treat the reaction, and we'll forge ahead. I can only have clear liquids through the whole infusion. So much for Beantown Burrito. Then again, those quesadillas now remind me of anaphylactic shock so maybe it's for the best that I put that place behind me.

When the nurse was done with her explanation of the desensitization process, my first question was simple -- Could someone stay with me overnight in the ICU? Despite all my progress on being happy with my alone time, I really didn't want to stay there by myself.  She said there is a recliner. Perfect. Brian has somehow found a way to get decent sleep in one of those, I thought to myself.

When I later told Brian the plan, we didn't even discuss who we would ask to take the kids overnight. We both just assumed that we would ask Brian's parents if they could do it. Which brings up the first reason why I included the quote above -- because far too often, we are guilty of taking Brian's parents for granted. And really, they deserve our infinite gratitude.

Brian's parents are two of the most giving and selfless people I have ever met. Janice is a kindergarten teacher and Paul just retired from teaching adaptive physical education to special needs students in the Boston Public Schools. I needn't say any more to prove the goodness in their hearts, but I will.

Janice's mother, the leader of the Kosta clan, shares the two-family house with Brian's parents in South Boston. Grandma is a very special person to Brian, and obviously, to me too. She is a total spit-fire and despite that diabetes causes her significant physical difficulties, it hasn't dulled her mind. Grandma still seems to know almost everyone in Southie (young professionals excluded) and if she doesn't know them, she knows one of their relatives, or at the very least, she could tell you their ethnic background. We love going to visit Grandma although we don't do it enough, especially in the last few months since she has been in rehab for diabetes-related ailments. Still, the kids adore her, and not only because of the stash of peanut M&M's that she always keeps for them.

Grandma's husband came over from Albania, and when he did, he took an American name. The name he chose was Teddy. I never had the pleasure of meeting Brian's "Grandpa Ted" and I so wish that I had. He died of leukemia when Brian was 12. But I've heard so much about this great man -- about his never-ending warmth and kindness; about the corner store ("Ted's") that he and Grandma owned and operated for years (apparently he gave away almost as much food as he collected payment for); about how much he loved and enjoyed his three daughters and his grandkids. When Brian suggested that we name our baby boy Teddy, I didn't hesitate for a second. To this day, I am always proud when someone asks me if Teddy is short for anything. Nope, I say. It's "Teddy" on his birth certificate. We named him after Brian's grandfather.

When I get sad that I never got to meet Grandpa Ted, I remember that I have Janice. Because it sounds to me like she got all of his goodness. She is patient, kind, and endlessly generous. Janice spends almost all of her day helping kids or her mother or us, and she never, ever expects anything in return. All the while, she enjoys all of the little wonders that life has to offer -- from watching Teddy and his friends sell lemonade from the stand that Brian built (see below) to a joyful squeal from Annabel when she sees Nana for the first time in a few days. Mother-in-law jokes just don't work for me because I really do have an awesome one (mother-in-law, I mean, not joke). 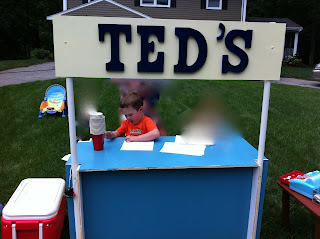 Next, to Paul, or Papa, as he's known in our house. I couldn't possibly do justice to the relationship that Paul and Teddy have built over the last four years, and Annabel has followed in Teddy's footsteps of utter adoration for her Papa. I think there is only one person in Teddy's life that could match his energy level day in and day out, and that's Paul. When Paul visits, it's like sports camp at our house. Paul leads Teddy, and often, his neighborhood friends too, in games of baseball, soccer, golf, tennis, football, or lacrosse. For hours, Teddy and Paul will play outside, draw pictures, or go to the playground and this helps give Brian time to mow the lawn or get dinner started when I'm still at work. If the usual activities get old (which rarely happens), they'll come up with a new one, like they did during the Occupy Boston events a year ago when they put Grandma's handicap ramp to work: 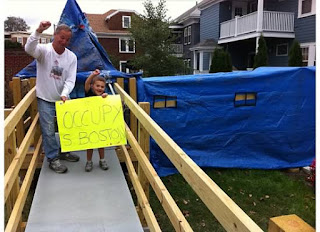 Our house would fall apart without Paul and Janice, and there's definitely no way we could make Brian's coaching schedule work if they weren't willing to do all that they do for us. I'm pretty sure Teddy has already figured that out. Last holiday season, as I perused through Teddy's school's monthly newsletter, I got to reading the kids' responses to the question, What are you thankful for? Teddy's response? My Papa and Nana. Us too buddy; us too.

The second reason that I love the quote above is completely different than the first. I love it in the context of today -- Veterans Day. I have absolutely no idea what it is like to be a soldier, never mind, to go to war. My closest connection to the military is through several of my cousins who have bravely served our country and continue to do so. But I have only barely talked to them about their military service, and I know very little detail about all they do for our country. Nonetheless, I am infinitely proud of them and constantly pray for their safety.

I've used a lot of war-related language to describe my experiences over the last few months; words like fight, battle, attack, conquer, enemy, allies, defeat, and victory. But I never mean to equate my struggle with real war. I suppose there may be some similarities but because I know so little about the life of our servicemen and women, I don't even feel comfortable guessing as to what those similarities may be. I can, however, see a few obvious differences.

Perhaps some of the most obvious differences also prove to me the unbelievable strength and courage of our military men and women. This week, Brian will sleep in the ICU next to me and my Mom will be in a hotel room across the street. My kids will be a car ride away, as will most of my family and friends. I'll have constant access to almost everything I know, and I'll be surrounded only by people trying to help me. I wish I could say the same for those who serve our country, but I can't. Instead, many of them will leave everything and everyone that they know and love and head off to a foreign land. They will brave enemy attacks, endure horrific wounds, and risk their lives for people that they'll never even meet. Their spouses and loved ones will power on, somehow, with only intermittent contact and limited information. One time I accidentally left my cell phone at home and I felt lost for a whole day, even while I sat at my office with a landline and the internet. That's just one reason why military people have every right to be aggravated by people like me.

Another reason is that I far too often take our servicemen and women for granted. Especially from my cancer cocoon, I know that I don't pay enough respect to this group of people that has selflessness like I would never even understand, never mind display. Even this post feels totally inadequate. But I guess that's why the quote is so good. Because at the very least, I am keenly aware of the fact that our veterans and our military men and women deserve my deepest gratitude, even if I don't stop nearly enough to show it.
Posted by Tara at 10:23 PM