In my first two years of college, I had a really unhealthy relationship with exercising. I did it way too much and for all the wrong reasons. I loved it, yet I hated it at the same time. When parts of my body hurt (usually my knees), I kept going, even if tears were collecting in my eyes.


Gradually, that all changed. I went for jogs with Brian because I wanted to. I played pick-up basketball because I loved the sport. I learned to play golf and was happy riding around in a cart even after two hot dogs on the 9th hole. In the end, I basically just grew up to realize that other things were way more important than how many calories I burned.

When I was teaching and going to law school, exercise was low on my priority list. When I had kids and worked at Ropes, it was even lower. But earlier this year, when I began at Verrill Dana and my bedtime came to be at a reasonable hour, I started to exercise pretty consistently and I felt great.

In my then-new trying-to-be-healthier kick, I didn’t exercise all that much, but the little that I did do, I loved. Years ago when I realized that I would never have time to go to a gym and my knees hurt too much to run outside, we bought an elliptical machine. Although it had collected a bit of dust in the basement, I was ready to put it to work. I got in the habit of getting up in the morning before the kids woke up to spend 20 or 30 minutes elliptical-ing. Absent my cancer anxieties, I am not a morning person and at first, it was beyond painful every time my alarm clock rang. I’d often hit snooze and go back to sleep, promising myself (and Brian, who didn’t care either way) that I would get up tomorrow. But on those days, I’d always regret snoozing. That feeling of regret started to motivate me. Gradually, I came to cherish that 30 minutes of quiet and sweat before dawn, and although that initial minute of getting out of bed was never easy, the pain of it passed more quickly each time.

In July, as much as I loved my routine, I decided I needed to change it up a bit. I had heard lots about CrossFit and although my initial reaction had been, I could never do that, never mind find the time to do that, I slowly convinced myself that maybe I could. Finally, I decided to give it a try and I set my alarm to attend the 5:30am class at CrossFit HomeBase in Canton.

To say that I was intimidated would be an understatement. I wasn't intimidated by the fit and buff class-goers because I had long been at peace with the fact that others were far more in-shape than I was. Instead, I was intimidated by the impending realization that my body couldn’t do what it used to be able to do. I was afraid of living the dream I often had when I slept – that I was trying to run fast but my legs wouldn't move; that I was attempting a gymnastics routine but just couldn’t get my body to perform the tricks; that I was shooting a basketball and couldn't score.

The reality of my first CrossFit class was a lot like that dream, but not in a nightmare-ish way. When I was a gymnast many years ago, 20 consecutive chin-ups were automatic. Now I was lucky if I could do three. But I did what I could, and I loved the challenge set out before me. I couldn’t wait to get better at what I was so bad at the first time.

When I got home from the first class, I took a shower. Already, my arms were so drained that I could barely shampoo my hair. It took a week to recover from the soreness, but once I could bend my legs and touch my head again, I went back. Again, I loved it.

Then came my cancer diagnosis. Remembering how sore I had been that first week, my warped brain worried that I had somehow propelled the cancer cells out of my tumor. Turns out that hadn't happened. I’m just an idiot.

As I have recovered from my surgery, I have started to exercise again. I still walk early in the mornings every now and then, but mostly, I have elliptical-ed in my basement (I'm still kind of a wimp about the weather). My Kick Cancer’s Ass playlist still blares every chance I get, and I still think of each person that suggested a song when it begins.

For a few weeks after my first round of chemo, when I sweat, it felt like hot chemicals were burning through the top of my shaved head. They were, which is why Dr. Bunnell says exercising during chemo is so useful; it helps push all the toxins out.

The 20 or 30 minutes of exercising in the morning has become almost sacred to me. In that time, I try not to think about to-do lists, work, doctor’s appointments, or anything else. Instead, I try to keep my focus on one thing – beating cancer. I visualize my healthy body defeating the horrible disease. I close my eyes and my legs spin faster. I imagine healthy cells conquering sick ones. I feel my own strength. I imagine good things killing bad ones. And I spin even faster. Exercising has never, ever, felt so good. Even when I’m not feeling well.

All of the sudden this morning, I felt the same way I had felt earlier this year – I wanted to mix up my routine. So after I dropped the kids off at school, I headed back to CrossFit HomeBase. I didn’t tell Brian or my Mom or anyone else where I was going because I was so afraid they would try to talk me out of it; tell me that my body wasn’t ready for it yet. Well, they would have been right because there was literally only one exercise on the entire agenda that I was able to do -- sit-ups -- and I could barely do more than four at a time.

Dr. Chun explained something to me after my surgery about never doing push-ups because of the way my tissue expanders are positioned in (or around?) my pectoral muscles. When the entire warm-up today was based on push-ups, I thought I made a terrible mistake by attending the class. But Kevin, the consummate coach, modified that exercise, and every other one for me based on what I could do (or better yet, safely try to do). And so I went along with the group, and while they used their arms, I used my legs. When they did push-ups, I stepped up on a wooden box. When they did handstands, I stretched like Superman. When they burpee-ed, I squatted.

Going back to that class today brought me an incredible mix of emotions. On the one hand, I felt like I was screaming a big "F.U." to cancer, and that felt great. On the other hand, I was reminded that I am still healing.

Rachel and I did gymnastics together for years and way back then, when we weren't in the gym, we would spend hours walking around on our hands and doing cartwheels and back-handsprings on our front lawn or on our trampoline. We could have walked on our hands down a football field if we wanted to. Today it was so hard to watch everyone doing handstands knowing that something in my chest could tear if I attempted one; knowing that where once my body had been so nimble, now it was pieced together and partly artificial. It made me feel really old, even though I know I’m not. But in the end, the "F.U." feeling far outweighed the feeling old one.

When I got home (after an awesome trip to vote), I took a shower. This time, my arms felt perfectly fine to shampoo my hair, but shampooing wasn't necessary. Because during that shower, my hair fell out into my hands like never before. Readers seem to be fascinated by the hair thing, so here's what my hand looked like every time I touched my head: 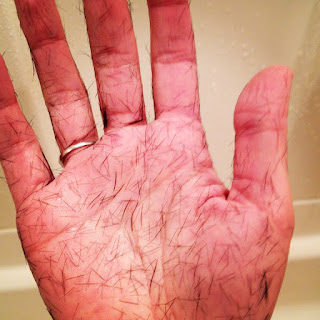 Cute huh?!? After that shower, I looked totally different, so I took a few pictures for posterity: 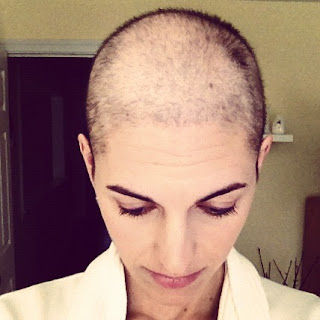 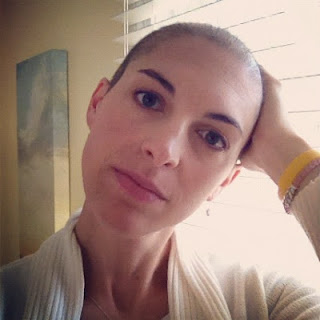 To be honest, the being bald thing still doesn't bother me. As I laughingly told Dr. Nakhlis when she remarked at how well I handled getting my breasts removed, It's not losing my hair or my boobs that I care about. It's losing my life!

Tonight Dr. Bunnell called even though I wasn't expecting him to. He spoke to me for over 20 minutes and during that time, he explained much of what Danielle told me yesterday, with some added detail. He explained that we’re going for a cure here, so timing is important, but the delay should not hurt my chances at a full recovery. He expressed his sincere preference that we make the Taxotere work, but there are other options if ultimately, it can't. Dr. Bunnell also clarified that my appointment with the allergist and my skin test will be on Tuesday, November 13th because Monday is Veteran’s Day. (I’ll be patient for veterans; it's the very least I can do.) If all goes well with the skin test, I will be scheduled for desens the next day. Dr. Bunnell explained that because of the severity of my reaction, the allergist will likely take the safest route and schedule my infusion for the ICU. A nurse will remain with me at all times and the medicine will be administered at an extremely slow pace. In fact, it will be an all-day thing, and I may even need to stay overnight. I'm fine with that. I just want it to work. Unfortunately, if there is no ICU bed open at the time (and we can't know that until that very morning), I will again face a delay. So much for a nice neat schedule; I'm going to need to be flexible here.

Yesterday I decided to set today's goals low, and I did. But somehow, I still found myself back at a class that puts my strength to the test. I felt like myself again -- not numb or mad or sad or frustrated. Just on a mission to kick this cancer's a$& straight out of my body.

I love this quote, and it seemed especially fitting today:

Today at CrossFit there were a whole bunch of things I could not do. But I did what I could, and I hope cancer was watching and listening. Most of all, I hope cancer knows that as freaked out as I may sometimes get, I will adjust. I will modify. And whatever my army of Allies looks like in the end doesn't really matter. Because we will be victorious and cancer will be like my stubbles of hair -- flushed down the drain forever.
Posted by Tara at 10:59 PM