The phlebotomist came to draw by blood around 5am this morning and by nine, the fabulous PA-in-training, Lori, had leaked the news that my ANC had hit 490. I couldn't even believe it. I'm getting out, aren't I? I asked. Lori smiled and denied the certainty of it, but I could tell, the answer was Yes.

I still needed one more two-hour infusion of antibiotics but when that was done, they disassembled the hardware that had collected on my arm (see below) and I busted out of the Brigham like a caged animal. 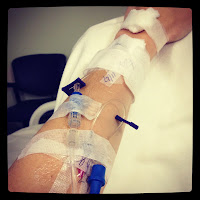 Like most caged animals when they reach the wild, however, I was very apprehensive when I met reality, or in my case, the bustling main lobby of the Brigham. It was packed with people and all of the sudden people mean germs. And germs mean fevers and fevers mean hospitals and hospitals mean time away from my family. So while I had been desperately waiting for this moment to walk the halls without a mask, I found myself at the information desk asking for one.

Brian and I treated ourselves to a delicious lunch at Legal Seafood on the way home despite that I was still in my pajamas. Then I dropped him off at hockey practice and headed home for the first time since Friday. Once home, I (obviously) cleaned and unpacked to the tunes of my Kick Cancer's Ass playlist. An hour later, Brianne and I went to pick up the kids. On the ride there, I was as giddy as a kid on Christmas.

Still feeling a bit weak, tired, and sore, and with a headache that just won't quit, it was harder than I anticipated to jump back into the hyper-activity of a typical night with the kids, but I loved it nonetheless. After baths, it was time to do what Teddy had been waiting to do since Saturday -- decorate the Christmas tree. And so we did.

I teed up the ornaments while the kids dressed the tree. 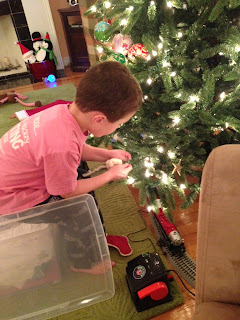 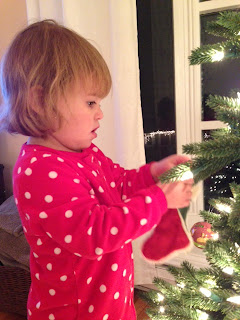 I watched Teddy meticulously plan his approach with each ornament, and step back and admire his own work. At first, Annabel struggled to find a way to make the ornaments stay on the branch, but I didn't rush to her rescue. Instead, I watched her try and fail and try again. She eventually figured it out, and once she did, she piled those ornaments into a little hanging pile: 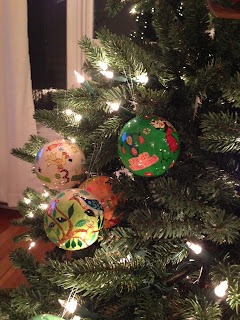 When the kids were done, the tree was a bit bottom heavy, and even though part of me wanted to keep it that way, I did a bit of rearranging after they went to bed. 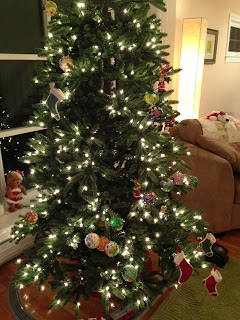 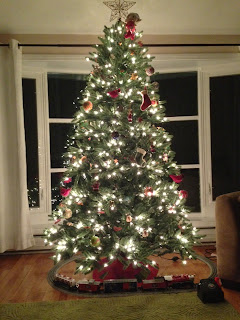 Last night, I said I was going to write about Dr. Joseph Murray. I included a Boston Globe article about him along with photos and good words. Another interesting article is linked HERE. Although this is the first paragraph to mention Dr. Murray's name, all of the preceding paragraphs were all about him. Here's why.

In the last few days, I have learned that Dr. Murray was a remarkable husband, father, friend, surgeon, professor, Nobel Prize Laureate, World War II veteran, writer, and I'm sure a hundred other things I don't even know about. I don't pretend to grasp the full extent of this man's accomplishments from having read a handful of articles about him in the past few days, but I can gather one thing for sure -- Dr. Murray was a problem solver who never quit. As I sat in bed at the hospital where Dr. Murray performed the world's first organ transplant, at the same hospital where he died on Monday, I kept coming back to that role. And I kept thinking, Thank goodness for people like Dr. Murray.

I had no idea until tonight that Dr. Murray faced such criticism for his then-innovative ideas on organ transplantation. I also had no idea that Dr. Murray tried and failed for so long before he finally achieved what he believed in his heart he could do. Moreover, I never really thought about how many problems had to be solved before a team of doctors could make an organ transplant work. Now that I do think about it, I can't believe that they figured it all out. But all I have to do is think of Ashley to be eternally grateful that they did.

In a way, I had it easy -- fake boobs that my body wouldn't reject. And even though cancer, chemo, allergies, and blood counts, rather than organ transplant, have been central to my world lately, in the end, it's all the same thing -- a problem that needs a solution. A barrier that needs someone with the creativity, courage, dedication, and sheer grit to knock it down. A patient that needs a Dr. Murray.

As I watched Annabel struggle to get the ornaments on the tree, I thought about Dr. Murray. How he failed. How he tried again. And so I sat back and watched her figure it out. Not because I think she's a future Nobel Prize winner (although who knows, right?!?), but because I know the world needs as many problem solvers as we can possibly find. I also thought about Dr. Murray because ultimately, his work and the work of other doctors and scientists and researchers like him is more than just about solving problems. It's about giving patients like me the chance to watch our kids successfully hang an ornament on the Christmas tree and turn to us beaming, as if to say, I did it.
Posted by Tara at 11:56 PM