Today I went to visit Julia and her husband. If you don't remember Julia, you can read more from a prior post linked HERE. I knew from her husband's email earlier this week that Julia is not doing well, and unsurprisingly, seeing her only confirmed that. Julia is a small woman to begin with, but today, despite her long dress, high socks, and winter coat (that she never took off), Julia looked as thin as ever. Her smile was still bright and beautiful, but it's very clear that Julia does not have much time left.

Julia and her husband are such gracious hosts. Their city apartment is old and the floors feel slightly slanted, but they take great pride in their clean and comfortable home. Their kitchen furniture is all made of metal, and folds, and the small table was covered in a large piece of blue and white fabric adorned with the Star of David, despite that Julia is a devout Catholic. Christmas music played in the background and a digital photo show played on their fuzzy TV. Julia and her husband had clearly prepared generously for my visit -- two bowls of fresh fruit awaited me, as did a large pitcher of water and a tea kettle.

Most of the time that we sat around the table, we talked about wonderful things. They told me how well their teenage children are doing in school and they described their friends and family in the photos that popped up on the TV screen. In rough English, Julia's husband translated her Vietnamese to me, and as she was last time, Julia was full of modest advice on things I should do as a cancer patient. For instance, we had a 15 minute conversation about aloe vera although I only grasped about three of the minutes. I think that Julia was telling me that she wanted me to come over again soon so she could squeeze out the juice of aloe leaves (which apparently you can buy in a nearby store) and make me a special drink and also a cream to put on my face. I took that to mean my skin looks old and wrinkly, and although I never really thought about it, I bet it does. Oh well, that and my shedding eyebrows and eyelashes are the least of my worries.

After my last visit and the terrible heartburn that followed dim sum, I decided on my drive over that I would kindly refuse any unique (to me) food that they may offer. But that was much easier said than done and in the end, I still worry that I offended Julia by refusing the crispy sheet of ?? that she fried up for me. She actually gave me about 20 of those crispy fried sheets of ?? and I'm pretty sure my car is going to smell like ?? for a long time to come. After chemo I'll be polite and more adventurous. But for now, I told Julia that I was going to eat them after I went home and had my lunch. Then I took the bag of ??s with two hands (grabbing something with one hand is rude in her culture), and I thanked her.

Naturally, there came the time in the conversation for Julia's medical update. I didn't want to talk about it but clearly she did, so I let her. Part of me wished her husband didn't translate this part of the conversation, but even if he hadn't, I would have gotten the point. Because as Julia spoke, she pulled the collar of her jacket and dress back to show me the tumor that was now protruding from the front of her chest. It was lumpy and awfully, awfully large. I so badly wanted to look away, but I couldn't. Or better yet, I didn't.

Julia explained that she is still in chemo at Dana-Farber every three weeks, but the cancer is deep into her brain and her doctor thinks she has six months to live. Incredibly, when I met her over a year and a half ago, that was the same timeline with which she was working. Just like I had no idea what to say to this today when I sat there rubbing Julia's tiny arm, I have no idea what to type about it now. I think my hands are just holding onto my laptop as they held onto Julia's jacket. Trying to brace myself. Trying to understand how something so bad could happen to someone so good.


Julia is very religious and so today I brought her a small ornament of the cross. It was the second ornament on their tree (aside from the beautiful shiny bulbs) and I snapped a photo of the tree with my phone. I wanted the photo, but more, I thought Julia would be so proud that I fancied her tree worthy of its own photo. She was. 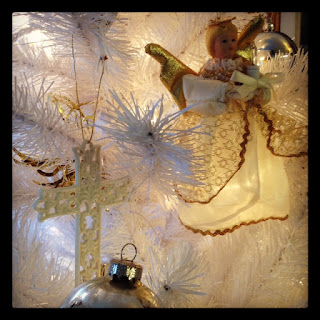 On the drive home, I couldn't help but think about how this is most likely Julia's last Christmas. Pause. I've sat here for a while now thinking about what else to type. Honestly, I don't even know.

One thing I do know is that laughter helps these suffocating moments. Even today when the conversation got unbearably sad, I made a light joke about how I didn't understand how Julia could look so beautiful if this is what her doctors were telling her. She laughed a bit before it was translated for her, and more after she heard it in her own language.

I don't know how my train of thought just arrived at this story, but I'm going with it ... This summer, during our week vacation in Falmouth between my diagnosis and my surgery, Rachel and I were swimming in the pool with the kids. Annabel had an eyelash on her cheek and Rachel pulled it off, put it on her pinky and asked me what I wanted to wish for. Ah, to be here next year, I replied immediately with that Duh look on my face. We both laughed really hard.

I've wanted to use the same joke recently when Brian, my Mom, and Rachel have begged me for a list of what I want for Christmas. Seriously, I can't think of a darn thing I want besides just being here for lots more Christmases. But that's not what they want to hear so when Rachel pushed me on the topic, I told her to buy me fun clothes and earrings (when you're bald, a nice pair of earrings really stand out!). Rachel told me I need some tube tops since I don't need to wear a bra anymore. Tube tops it is then.

I guess what crushes me the most is that Julia is probably past the point where she can hope for more Christmases. I can't even imagine what that must be like, and perhaps it's foolish for me to even venture into that line of thinking. But it's really hard not to after a visit like today's.

At the same time that I wish for things in the future, I also realize that Julia embodies one of the greatest gifts that cancer has given me -- she dwells in the present. Sure, we have our few minutes of crying about the future almost every time we meet, but those crushing moments pass and we move on to something better. Many of my days in the past few months have followed a similar pattern. Julia's amazing ability to dwell in the present is what makes me know that she is going to enjoy this Christmas. I don't know how many people in her situation would be able to do that, and I think it makes her heroic.

Of all the posts I've written, this one has been the most difficult to end. I'm sure if I sat here long enough I could figure out why, but I don't think I can take all that right now. So as I tried to figure out how to conclude, I asked myself, If I had to sum up Julia in one word, what would it be? The answer came to me before I had even completed the thought of the question. Grace. Julia is pure grace.

And so I jumped up from my chair (ouch, sore hips) and went to my pile of the cards, letters, and other gifts that my angels have given me over the past few months. I had remembered that Carole, the wonderful nurse from the Faulkner who has loyally kept in touch since my surgery, had sent me a poem about grace. I'm including it here even though, after several reads, it still hasn't all registered with me. That's part of why I know it is such a good piece -- it can't all be digested in one sitting.

Even though I haven't fully grasped how this writing relates to Julia, I already see many ways that it does. But I won't spell all of those out. Instead, I'll let you find your answers. Because there's no way for me to properly conclude this post. There's no way for me to wrap up my feelings about Julia. Or her last Christmas.

How to Recognize Grace
By: Marilyn Chandler McEntyre

It takes you by surprise
It comes in odd packages
It sometimes looks like loss
Or mistakes
It acts like rain
Or like a seed
It’s both reliable and unpredictable
It’s not what you were aiming at
Or what you thought you deserved
It supplies what you need
Not necessarily what you want
It grows you up
And lets you be a child
It reminds you you’re not in control
And that not being in control
is a form of freedom
Posted by Tara at 9:31 PM