Next to the chair where my Grandma used to sit, read, and do crossword puzzles is a big book shelf stacked with thick black binders. The binders are scrapbooks that my Grandma kept as far back as the 1940s, I think, although I don't know for sure the date of the earliest one. Each binder is labeled with a year and inside it is packed with sheet protectors full of newspaper articles, photos, postcards, kids' drawings, letters, academic papers, Playbills, and countless other memorabilia. There's so much great stuff in each binder that even if I've been through it ten times before, I would find something new and interesting the eleventh time around.

I'm the opposite of a hoarder in that I'd usually rather get rid of things in my house than go shopping. But when it comes to keeping stuff for scrapbooks, I have a lot of my Grandma (and my Mom) in me. Every year I make a scrapbook of all of the random types of things that my Grandma kept, and if we ever had a fire in the house, I'd yell to Brian to grab the kids while I started to throw those books out the back window.

On the other side of my Grandma's chair is an even longer bookshelf full mostly of classic novels. My grandparents read more than anyone I've ever met and even though I read only a small fraction of the books on those shelves, I always felt enlightened by just being around them (the books, and my grandparents, I mean).

Beyond the glass doors of that room where my Grandma sat is the most beautiful view I've ever seen. A few years before she died, I took this photo of my Grandma admiring that view. I wonder what she was thinking at this moment. Sometimes I think she looks incredibly content. Other times I think she looks really sad. I don't remember asking her at the time what she was thinking about. Even if I had, she probably wouldn't have told me. My Grandma wasn't usually very forthright with her feelings and I think Rachel and I confused the heck out of her with how open we were about ours. 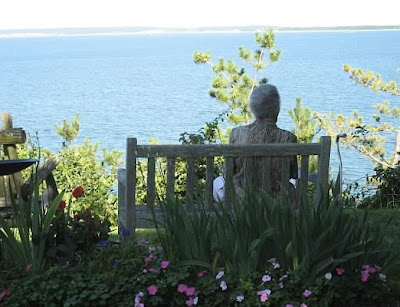 On December 7, 2009, my Grandma passed away with her family by her side. We all knew the time was coming, but still, it was awful when it happened. I had never seen anyone die before and the sounds, sights, smells, and feelings were not something I could process fully then or even now. I had never seen my Mom so upset as she was in those few minutes after my Grandma took her last breath. I didn't know what to say so I just hugged my Mom. Eventually I think I said something about Grandma being in a much better place but I don't know what my Mom thinks of Heaven so I don't know if that even comforted her at all.

I got to thinking about my Grandma this morning as Teddy prepared for one of his favorite little friends to come over after school. I'm not used to making playdates so this one took a while for me to set up (turns out, it's really easy to do!). Teddy talked about it all weekend and this morning when he woke up, the first thing he did was get his booster seat from Brian's car and put it in my car between his seat and Annabel's. Then Teddy started planning their activities. He wanted to make Christmas cookies, build a gingerbread house, and "make some square thing out of paper," although I had no idea what he was talking about on the last thing. When Teddy started to plan the Christmas cookies, I started thinking about my Grandma. Every Christmas except for her last few she made an incredible array of Christmas cookies. I told Teddy I would make the dough during the day and he and his friend could cut the cookies out and decorate them after I picked them up.

Fast forward an hour or so to when I found out that Teddy's friend was sick today and the playdate was going to need to be rescheduled. Tears. Mental melt down. Screaming and crying, I don't even want to go to school today! I felt so bad. I finally got Teddy in the car by promising him a special trip after school. As I dragged him into the middle booster seat (he pathetically wanted to sit in the spot he had prepared for his friend), I tried to think of what this special trip would be. Ah ha! Daddy needs your help coaching his hockey practice today after school. Can you do that? He stopped crying. Silence. OK, he said, and squeaked out a smile. Thank goodness Brian OK'ed that plan after the fact. I should learn not to make promises I don't know that I can keep, but sometimes every parent needs to fly by the seat of their pants. (Speaking of promises I may not have been able to keep, I really should have held my tongue on the making the dough thing. Now that I think about it, I don't think I'm capable of doing that without Brian's help.)

Anyways, this all got me thinking about my Grandma and her cookies. After the UU ceremony we had for her after she died, my Mom gave everyone in the family a little Shutterfly book full of photos of my Grandma and of some of her favorite Christmas cookie recipes. This morning I went into my scrapbook to find that little recipe book. I thumbed through it and thought about trying to make one of the recipes this year. Goodness gracious...playdates and Christmas cookies!?! I better slow down before I become unrecognizable to everyone who knows me.

I put the recipe book back (just for now) and right next to it found the text of the reading that I gave at my Grandma's funeral. I had forgotten about that reading, and it was nice to find it almost three years to the day after she died.

I started with this quote from Dr. Seuss:

Then I talked about my Grandma's love of reading and of travel and of a children's book that I found, and shared with her, years ago. The book is called Miss Rumphius and it is written and illustrated by Barbara Cooney. 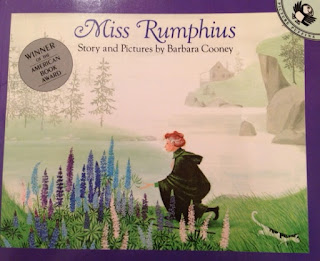 The story is told by a young woman named Alice about her great-aunt, Miss Alice Rumphius. When she was young, Miss Rumphius told her grandfather that she was going to do the two things that he had done -- travel to faraway places and live by the sea. Miss Rumphius's grandfather told her there was one other thing she must do -- "You must make the world more beautiful," he told her. After Miss Rumphius had traveled the world and found her home by the sea, she planted lupine seeds and lupines grew all over.

I always loved this story because Miss Rumphius reminds me of my Grandmother -- strong, independent, brave, generous, and beautiful. With my Grandpa, my Grandma had the opportunity to travel all over the world. Her scrapbooks included evidence of their trips to Egypt, Cote d'Ivoire, Siberia, Korea, Vietnam, Russia, and many other countries. My Grandma also got her spot by the sea. Most importantly, she made the world more beautiful in a thousand different ways, including by the flowers she planted, the children she taught to read, and the many important social and political issues to which she dedicated much of her time.

Here's one of my favorite parts of the story, which happens to be the very end:

My Great-aunt Alice, Miss Alice Rumphius, is very old now. Her hair is very white. Every year there are more and more lupines. Now they call her the Lupine Lady. Sometimes my friends stand with me outside her gate, curious to see the old, old lady who planted the field of lupines. When she invites us in, they come slowly. They think she is the oldest woman in the world. Often she tells us stories of far away places.

"When I grow up," I tell her, "I too will go to faraway places and come home to live by the sea."

"That is all very well, little Alice," says my aunt, "but there is a third thing you must do."

"You must do something to make the world more beautiful."

But I do not know yet what that can be.