With the way our work schedules line up, I have always been the one who drops the kids off at school and Brian has always been the one who picks them up. Brian usually leaves the house before the kids wake up so morning time was always Mommy time. And I don't mean Mommy bonding time. I mean Sergeant Mommy says get-your-butt-in-gear time. Because dropping off is all about timing.

Most days, I tried to catch the train that left Westwood at 8:07. Before this September, the kids went to two different schools so I would try to get Teddy to his school in Canton by 7:30 (when it opened) and then shoot Annabel over to her school in Westwood -- through yucky traffic -- by 7:50. After a quick hug and kiss, I'd leave there by 7:55 and try to arrive to the station by 8:02, leaving me five minutes to run for the train.

Almost every day I did, literally, run for that train. Better yet, I all-out sprinted. I've only missed the morning train once, although that impressive record is not so much due to the speed of my sprint (it's getting slower and slower), but rather that the train is often running late enough for me to make it. If I don't make it, it's not a huge deal because I rarely have a meeting before 9am and there is another train about 25 minutes later. But that would mean more work to do later, which could (in worst case scenario) mean missing Annabel before she went to sleep, so I liked to start the day off right. Plus, it's really annoying to miss a train by a minute or two.

To make it to Teddy's school by 7:30, we would need to leave by 7:15. That means the kids needed to be dressed and eating their breakfast by 7:00. Given Teddy's need for lots of transition time, that means he needed to be up by 6:45 to get in his full TV show before school (oh yes, I am shameless about that 24 minute show). Annabel is more flexible, so I'd try to make sure she was up by 7:00 but that almost always happened naturally anyways. For all of that to happen, it would mean that I would need to be showered and ready by 6:45 which meant waking up or finishing my 20-30 minutes on the elliptical by 6:25. When Annabel was awake early, I would put her in a little fold-up jumpy thing in the bathroom while I showered. Then she'd lie on our bed while I got dressed and I'd talk to her about work or other random stuff. I loved that time.

I would always pile all of the crap into the car before I roped in the kids. That meant that the passenger side seat would hold two lunch boxes (filled the night before), three coats (and in winter, hats, mittens and sometimes snow pants), two school bags, and my work bag. Then I'd do a check for the following: my cell phone and wallet, any forms or payments due to the kids' schools, any necessary refill on diapers or a change of clothes, and more recently, Annabel's blankie, Cookie Monster, and pacifier.

Teddy can buckle himself into his booster seat but getting him in the car is the hard part. I'm sure my neighbors can hear me yelling at him as he wanders around the driveway looking at his friends' houses or a school bus passing by or a bird in the sky. You name it, that kid will find it as a distraction from getting his butt in his carseat.

Then there's Annabel who likes to buckle the top part of her own car seat. I'm all for building independence, but my blood pressure would be through the sunroof watching the clock as she tried to get the two buckle parts to match up. Often, I'd snap them quickly and give her all the credit. She wouldn't usually buy it.

Finally, I'd get in the car. In my old Civic, I'd usually notice right away that I forgot the keys. In the Venza, I see the message, "Key Not Detected," when I pressed the button to turn the car on. Right. Keys. Back into the house to find the keys. Then we were ready to go. An hour and a half later, I would be at my desk in Boston ready for the work day to begin.

Wow. I'm exhausted just typing that all out.

Which brings me to my first point. I honestly don't know how I ever did this five days a week. Even more, I don't know how I ever did it when I would often go to bed just a few hours before that whole routine started again. And even more than that, recently, as I prepare the kids lunches in my pajamas and aim to get them to the same school by 8:30, I am so scared that I won't be able to do it all again.

I remember this same thought process from when I was on maternity leave, so I know I should rest assured that everything will be fine when I go back. That I'll adjust again and be able to do what I used to do. But sometimes all of it seems overwhelming and I doubt myself, and I hate that.

I always used to wonder what people that didn't work did with their whole day. Not in a judgmental way -- I actually just didn't know. I remember thinking to myself, If I fill ten to fourteen hours of my day with commuting and work, what in the world would I do for all that time without work? Even in prior posts, I have written about the challenge of transitioning into this largely work-free time. Now I realize that somewhere along the way I must have made the transition, because I look at that person who was able to make the 8:07 train every day and I marvel at her. I haven't even showered by that time in the last few months (minus days when I've had doctors appointments, of course -- couldn't show up at Dr. Bunnell's doorstep looking shabby -- wink wink).

Now that I've spent time at home, I've come to the question -- How did I ever find time to work so much? There is so much other stuff to do! It's amazing how human beings adapt.

My six-month leave will end the first week of February. In fact, that week I will be in court for Wendy's big hearing, which means much of January (and next week) will be dedicated to related preparation. So even though I will be going to work a few days a week in January, February will bring the return to my full-time work schedule.

I am so blessed and so excited to soon be able to get back to my amazing colleagues and challenging work. But as I've mentioned before, I'm not good at transitions. It basically took me this long to transition into not working full-time, and now it's almost time to think about going back. So I'm not surprised that I've been worrying about it. But I am surprised at how much I am doubting myself. I need to stop that.

Yes, I really do. I need to remember that if I can get myself through cancer, I can definitely get my kids to school by 8:00 (7:30 drop offs are only for the older kids) and get myself to Canton Junction by 8:24 (although that train always feels like it comes early so I consider it the 8:20). At least I think I can.

I also need to remember that before cancer and after, I never perfected that whole morning routine. I always forgot something, always ran late on one of the several checkpoints, and yet, everything always worked out just fine. Which brings me to the photo that spurred on this whole post.

Today Annabel's fabulous teacher, Rachael, emailed me this photo of Annabel. Turns out I forgot her mittens yesterday and so Rachael ingeniously accommodated. I found these socks in Annabel's school bag last night and thought that hers must have gotten wet or dirty yesterday so she had borrowed these. Annabel apparently loves her new mittens and won't take them off. This photo is all I need to remember that our morning routine was fine before, is fine now, and will be fine when I go back to work full time in February. Because in the end, socks make fabulous mittens. 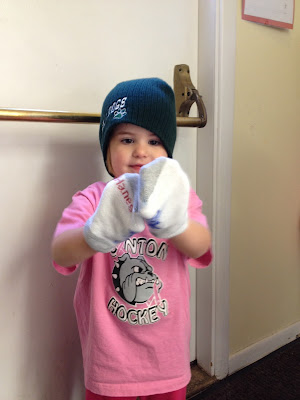 Please Note: I wrote this post before I saw the news about the shooting in Newton, Connecticut. Now, like millions of others, my heart aches. I cannot begin to understand the tragedies in this world, and I can't begin to comprehend what those in Newtown are going through right now. My thoughts and prayers are with them.
Posted by Tara at 1:10 PM