Our Children Will Play

A few weeks ago my friend Amy introduced me to a song that I fell in love with. Here's the YouTube version:


"One Day"
By: Matisyahu


From my ever-broadening cancer cocoon, I immediately connected with the lyrics:

Then the Newtown tragedy struck. In some ways, the lyrics helped me grapple with some of my emotions. In other ways, they didn't fit at all. Still, something about this song had gripped me.

I was stuck on the concept of waiting for, praying for, our children to play. I thought about it in terms of Newtown -- the victims, and the survivors. I thought about the children I worked with years ago in a South African township. I thought about kids in Syria and Israel. About kids in Boston, and in Canton. I thought about my own kids. The image of children being able to play without war or violence is a pretty powerful image and I know I'm one of millions who waits for it and prays for it every day.

I have always tried to keep a healthy perspective on youth sports, and it always helps me to think of kids I met in South Africa whose idea of organized sports was a ball on a dirt field. No coaches, no uniform, maybe even no shoes. Still, when they got the chance to play, they were happy. It was a joy to watch.

My childhood was as good as they come. I was so blessed because I got to play. Even though my parents introduced me to all different things from theater to dance to karate, it was sports that I came to love. I played sports constantly and loved every minute of it.

In high school, I swam and played basketball all four years. I also had shorter stints on the tennis and softball teams, where I watched teammates who were much more talented than me shine. All the while, I did gymnastics at a private gym. Gymnastics shared the same high school season with basketball and since, in the end, basketball was my true love, I never competed on the CHS gymnastics team although I always wished I could have done both.

I remember so vividly the smells, the sounds, and the feelings that came with high school basketball. I remember Rachel trying to distract Brianne during drills and Brianne, despite her undying competitive edge, eventually giving in to a good laugh. In the last several years, I have rarely reflected on these years, but now, I find myself coming back to them and smiling in front of my computer.

One of my favorite high school basketball memories came in my junior year. We headed down to North Attleboro to play an undefeated team led by a 6'3'' center who had already scored almost 1200 points in her high school career and was headed to play at Boston College in the following fall. It was North Attleboro's last game of the regular season and the night when they would honor all of the seniors on the team. Rumor was that a big cake waited in the back room that read, Congratulations on your undefeated season. We found that interesting, though not surprising, because compared to North Attleboro, we were a small school and an even smaller team (both in numbers and in height).

I always wondered if the cake in the back really said that or if perhaps Mr. Carta had made it up to motivate us. Either way, it worked, because somehow, we beat them. If the cake really did reference an undefeated season, I wonder what they did with it. Wipe the frosting off perhaps? That would have been unfortunate, since the frosting is the best part. Lesson learned, I suppose.

Anyways, that season we beat a couple of other great teams and in my basement, in a box labeled "Old Scrapbooks" (wink), I have a Boston Globe article that named our team the "Giant Killers." I loved that name then, and I love it even more now. In a way, it's fun being the underdog.

And with all of that, I come back to last night's Pink Out the Rink game. (You thought I had forgotten?!?) CHS boys hockey is not usually the underdog. They have been far too successful in the past few decades to play that card very often. In fact, I remember leaving the state tournament game last year with the kids -- Canton had just lost to North Quincy in a shoot out and the North Quincy fans were going nuts. In the parking lot, a group of high school boys were screaming, "We slayed the lion!" It was pretty chaotic and Teddy, terrified, asked me where the lions were. After assuring him that lions were only in zoos or in other countries, I told him about what the kids meant -- that Daddy's team was really good and teams got really excited to beat them. I wanted to tell him that I didn't think the kids' grammar was correct (wasn't it just "slay the lion") but I didn't go there. He doesn't need to be as nerdy as I am.

Anyways, I don't know what it's like to play for a team with the expectations that Brian's team has. Even considering all of the perspective that I mentioned above, I figure that it has to be hard on them sometimes. I especially worried that they had some seriously weird pressure on them last night. I mean, who wants to lose a game dedicated to their coaches' cancer-ridden wives?!? Never mind that it felt like half the town was there watching, hoping desperately for a W.

This is just why I love my Bulldog heritage. Because last night, those kids kicked some serious a#*. OK, I admit I didn't get to watch too much of the game -- Annabel and the bleachers are not a good match and we spent some quality time near the snack bar area eating M&Ms. But after the game Brian told me. They played so well, he said, eyebrows raised, shaking his head, and smiling. So proud. And that was that.

(This feels like the place for a huge shout out to this year's CHS football team who, as brave underdogs, defeated Stoughton on Thanksgiving. I never wrote about what that win meant to me, but I have to say, at a time when I need to believe that anything is possible, they showed me that it is. I was so proud.)

Since my eyelashes have almost all fallen out, I decided to try some fake ones from CVS for last night's big night out on the town. As I fumbled with the glue and the lashes before the game, I wondered if they would fall off if I cried. I tried to prepare myself for a flood of emotion because no one wants to see my ugly cry or my lashes dripping off my eye lids.

The preparation helped, and I was able to thoroughly enjoy the Canton kids taking the ice in their pink jerseys and socks without a flood of tears. But then came the Mansfield team. They all had pink laces on their skates and pink tape around their shin pads. I remembered back to a far-less-than-gentlemanly tiff that Brian had with the Mansfield coaches last season. These weren't exactly the friendliest of teams. But that didn't matter. Of course, I started to cry, forgetting all about the fake lashes (which, in case you're curious, managed to survive the tears). Brian visited the Mansfield locker room after the game to thank them for their support and I caught them getting on the bus to do the same. I told them how much it meant to me, that I couldn't even explain it. By the look in their eyes, they understood, and they thanked me for letting them be part of the night. It wasn't me, I replied.

After the game, Kristin and I were honored by a hall-full of wonderful people who had gathered to help beat cancer, talk hockey, and enjoy each other's company. It was a night I will never forget, especially since we walked away with raffle prizes of a ride to school in a police car and a ride to school in a fire truck. My family always puts all of their raffle tickets in those baskets and I'm sorry to say that it's likely no one else had a chance.

Seriously, though, I will never forget the generosity and the support that I witnessed last night -- the pink rink, our friends who sat with us, the "Shuman Alumn" #5 jerseys, the cheer of the crowd when Canton scored and made several huge saves for the shut out. I will never forget the joy of watching kids play. Kristin and I have each been blessed with a husband, a son, and a daughter. Families of four. And I will forever smile when I remember last night. Canton. Four. Cancer. Zero.

These great photos of the game were provided courtesy of a wonderful guy in Canton who works so hard behind the scenes and deserves all of our thanks for making these moments last forever. Thank you, Mike Barucci. 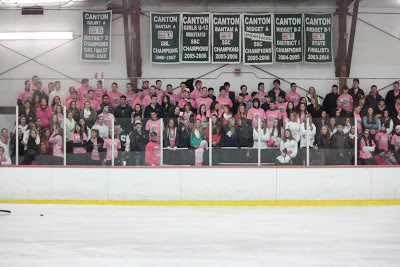 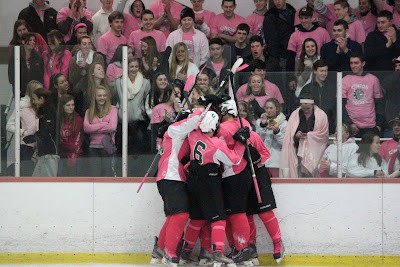 Below is a link to the article from our local newspaper about the game:

The Canton Citizen
Posted by Tara at 3:09 PM