Tomorrow morning I have my first appointment of the day at 6:45am on the second floor of the Dana-Farber Yawkey building. Given the winter storm that seemed, at least until a few hours ago, to be a bit of a wild card, we decided not to take any chances. At the last minute, we booked a room at the Best Western that is connected to Dana-Farber by a series of foot bridges (except for a few outdoor steps between the Jimmy Fund wing and the Longwood Galleria, unless we missed another bridge).

Brian and I tried to get the kids to sleep in time to grab a late dinner on the way into Boston, but of course Teddy would have none of that. Before my Mom, Brian, and I had finished our bread at Joe's, Teddy had broken Auntie Rachel down with hysterical tears and he had escaped from his bed for a seat next to Rachel where he could munch on Goldfish and watch TV. Rachel texted me, worrying that she was weak and we would be mad. I assured her that Teddy could break anyone. He did it to us before he even weighed ten pounds.

Rachel was also worried that we were stressed out because Teddy was so upset. I'll be honest; we weren't. We enjoyed our meal out together, knowing full well that Rachel can handle it and that at some point, even if it's four hours later, Teddy will fold (goodness, that sounds like me!). Plus, I think it's helpful for people that don't yet have kids to spend some quality time with them. Best to go into that adventure with eyes wide open, or at least as open as glimpses of parenthood will allow.

The Best Western's Inn at Longwood Medical is about as exciting as it sounds. The guy behind the front desk told us that it had been so quiet there that he was surprised to see us. I always knew how to find the hot spots in Boston. We laughed when we finally reached our room that was, no joke, as far away from the lobby as we could possibly get despite that we felt like the only guests around. We entered the room to a wall of heat. It had to have been 90 degrees in there and Brian immediately went to work on cooling it down.

Never a help in those situations, I headed for the snacks my Mom had packed (pumpkin bars) and a pack of cookies Kirsten had mailed to me (Tate's chocolate chips). Dee-licious, and totally earned since I sacrificed the Charles River Pie at Joe's for them. I know I've said it before, but the chemo steroids are unreal. Brian and my Mom are fast asleep (alternating snores) but I'm guessing that I have at least four hours of steroid-induced energy left in me. In fact, I'll probably be looking for more snacks again in an hour. I'll have to hide in the bathroom so the plastic wrapper of the cookie bag doesn't wake them up. How pathetic. Anyways, the drugs really do make me ravenously hungry. That hunger was part of why I backed off on my cancer-conscious diet during chemo. I plan to return to it, at least in some form, after the side effects of this last round subside, and I will do so relieved that the cheating has helped me return to my pre-diagnosis weight. Unfortunately, I won't be back to my handy cancer-fighting nutrition chart in a New-Year's-resolution type of way, but rather, in a I-really-want-to-be-here-to-make-other-resolutions kind of way. Don't worry, I'll still enjoy pumpkin bars and Tate's cookies. Just a lot less of them. Again, I have drifted. Or maybe I haven't even begun on my point. Either way, I move on.

I hadn't planned on writing a blog tonight since I know that these entries are usually ridiculously long stream-of-conscious blabberings (e.g., Halloween morning) or rants (e.g., about smokers). Nonetheless, I pulled out my laptop to surf the internet a bit. In order to get a wireless connection, I found the little piece of paper that the guy at the front desk gave us. Here it is: 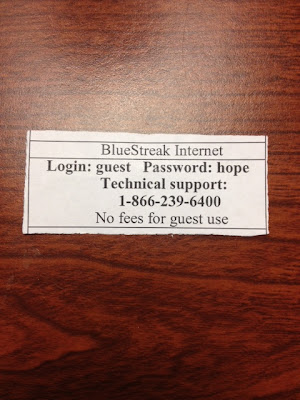