Brian just left for his hockey game, Annabel is asleep, and Teddy is hysterically screaming from his bedroom that he will "never stop crying until Daddy comes home." I have looked forward to this time alone all day -- to curl up on my couch and write, all to the sweet sounds of my son having a psychotic breakdown. Teddy's madness has been kind of a given lately when Brian has late games that we don't attend, and I have to admit, it's pretty frustrating. Seriously, do most almost-five-year-olds act as if they are being physically tortured when their mother has to put them to bed? It sure doesn't say much about my mothering skills. I have a call into his pediatrician for some advice because this routine isn't fun for anyone.

Yesterday I wrote about Spruce Point because it is one of my most favorite places on Earth. Tonight I'm going to write about another one of my most favorite places, which happens to be about 8,000 miles from Maine. This place is Kruger National Park, and since all of my efforts to calm down my son have failed, I may as well let my mind wander to this most beautiful of places while he tires himself out screaming at me.

When my academic semester abroad ended at the beginning of November 2000, I didn't fly straight home from Cape Town, South Africa. Instead, I flew to Johannesburg and my aunt Jacqueline, uncle Kirk, and I joined up for the adventure of a lifetime. I took hundreds of photos of this two week trip, including all of the ones included below, and all on rolls of real, actual film. I had a digital camera at the time, but it was as big as a brick and as slow as molasses. I've viewed my photos from South Africa countless times in the last 12 years and any family member or former student of mine has probably already seen these.

Until tonight, however, I don't think I have ever dug into the five diary notebooks that I filled over the course of my semester abroad. The only time in my life that I kept a real diary was during my time away in South Africa. I went back to those notebooks tonight because when I went to write about our safari vacation, I quickly realized how little detail I actually remembered. Of course I remember the big stuff, like the incredible excitement of spotting an animal on a game drive and the breathtaking beauty of a South African sunset. But I'm so glad for those notebooks because so much would have been lost without them. I'm hoping that I say the same thing about this blog years from now.

On November 3, 2000, my aunt, uncle, and I began our drive from Johannesburg to Kruger National Park. The drive could have been done in one day, but we stopped to see several beautiful sights along the way (including those photographed below) and didn't arrive at Kruger until two days later. 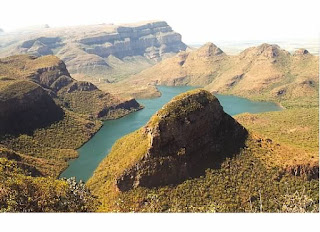 We entered Kruger National Park on a dirt road through one of its many gates, all of which give the false impression that the park itself is enclosed. The truth is, however, that Kruger joins several other game reserves to form an unfenced space of over 13,000 square miles in which wildlife roam free (for some context, Massachusetts is about 10,500 square miles). Within minutes of entering Kruger, we saw zebra and impala, and from there, every day brought a new incredible adventure.

Most days in the park began around 4am when we would wake up for our first game drive. Still half asleep but filled with excited anticipation, we boarded roofless Land Rovers and set out on dirt roads (and sometimes no roads at all) to find as much wildlife as our eyes could spot. Starting early was a must because that's when the animals come out for water and food. November is summer-time in South Africa so by 9am, it's hot, and the animals preferred to hide in the shade, much like we did. The sun rose early and our guide, perched in a chair attached at the vehicle's headlight, tracked animal footprints and other natural clues to find us the most incredible wildlife I have ever seen: