When he was done, I paged through the catalog. At first I was confused because I found just a few scattered markings. Did he really not find anything that he wanted? I kept flipping until I found several pages (like this one) that were covered in "T"s and something that vaguely resembled a checkmark: 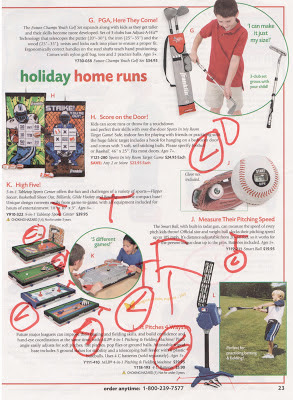 Teddy had found the sports section. That's when I knew for sure that the kid really does love sports. (It's also when I confirmed how egocentric four year olds are. There were only two or three "A"s in the entire catalog.)
I know that I shouldn't be surprised that a kid with two parents who love sports also loves sports, but for some reason I am. Now that I think about it, maybe it's not so much surprise as it is the awesomeness of watching a child start to form his or her own opinions. For another example, every single day I get a total kick out of the fact that Annabel's most favorite hat is her "Buw-gogs" hat (as she calls it). It's hard to get her to wear anything else.
Anyways, today I got thinking about my own love of sports when Mike, my friend from high school, emailed me the following link:


I've discussed my love of sports montages in a previous blog (linked HERE), and Mike said it best when he said that after watching this commercial he was going to buy something at Dick's Sporting Goods ASAP. It definitely had that effect on me too. In fact, even before this commercial, if I was somehow able to choose one store and have all of the inventory inside, I'm pretty sure that I'd choose Dick's or Sports Authority. Even over the Container Store, which tells you a lot about how much I love sporting goods.

No matter what Dick's Sporting Goods tries to tell me, however, it's not the equipment part of that video that gives me the chills. It's the mind and the body part. Exercise has remained a sacred time of every day for me, especially in the past few days as tomorrow's echocardiogram has come into full focus.

I remember driving into Boston for my first echo as if it were yesterday. I wrote about it HERE, in a post about my high school math teacher (yes, somehow the two topics were related). That echo hurt like hell, since I was only nine days out from my surgery. It was a true test of how much pain my body can endure (Answer: A lot).

The funny part is that I wasn't worried in the slightest bit about that first echo. I was still on a total high from the news that my cancer hadn't spread (and, perhaps, from left over pain killers in my system). Except for a few brief moments when the rad tech's facial expressions were not as happy looking as I would have liked, I trusted that I had a healthy heart even though other parts of my body seemed to have failed me.

This echo, on the other hand, has been on my radar for quite some time. As you know, I have worried far too much about my heart's tolerance of the Herceptin. I, like many others, have so desperately wanted to avoid the congestive heart failure that comes as a side effect for some women.

So on Sunday when Annabel went down for a nap and Teddy looked occupied with an air hockey game, I decided to go for a walk-run-walk, like I had a few days earlier. I put on a sports bra (to protect those tissue expanders from too much action) and an awesome new Nike running shirt and hat that Sean and Lauren gave me for Christmas. I hooked up my Kick Cancer's Ass playlist and headed for a four-mile loop around my town.

At the top of that hill, I was tired and hot so I took off my hat. I'm telling you -- if you have hair, you're missing out. The feeling of a cool wind on a bald head can be indescribably refreshing and Sunday afternoon I honestly thought to myself, Everyone should try this. It felt that good.

I hadn't run without stopping since before my diagnosis but something got into me on Sunday and I powered through those four miles in under 40 minutes. We sure aren't talking championship pace here but still, I felt like a champion (there I go with that patting-myself-on-the-back thing again -- sheesh!).

Yesterday I decided that CrossFit was safe, so I went there for an hour. Again, I had to modify, but again, I felt like every squat or lift or sit-up helped seal my victory over cancer. Today when I got home from my meeting with Wendy and a great lunch with some Ropes friends, I watched that commercial one more time. It made me want to run, and prove to myself one more time before tomorrow's appointments that my heart is doing fine.

I don't usually time a run (mainly because I don't usually run), but today I wanted to go faster than I had gone on Sunday. Thanks to the advertising team at Dick's Sporting Goods, I did. By three whole minutes.

It's hard for me to explain how much I love sports because I don't like them the way lots of other people seem to. I know these words will be sacrilege around Boston, but I'm not a huge Red Sox, Patriots, Bruins, or Celtics fan in my own little heart. Trust me, I wish I were because I've always thought that real fans -- like the ones who know the players' names not just because their kids have the shirt -- are so much cooler than I am. Really, I promise that I want them to win, and not just so that some crazed fan doesn't hack my blog and shut it down. Mostly I want our teams to win because it means a lot to people I love (even Teddy), and because it's so fun to gather for the games and eat and cheer. If our team loses, all that ends too, so Go Patriots!

For a further confession of what a poor Boston sports fan I am, I remember standing outside the Beantown Pub in 2004 on the October night that the Red Sox won the World Series. I was walking home from class at Suffolk -- probably something painful like Contracts -- and I stopped to peek in the window of the bar to check the score. A homeless guy was peeking in too and he wanted to talk about it, so I pretended like I cared as much as he did for a few minutes then headed home before the drunk fans joined me on the road.

The truth is that I'd so much rather play a sport than watch it. Watching baseball just makes me want to play catch or go to the batting cages like Brianne and I did in high school. Watching Olympic swimming makes me want to dig out my suit and goggles and join a gym with a pool. And watching gymnastics makes me want to run full speed towards a vault and fly over it. Of course, I'll just focus on being able to lift my arms over my head but still, a girl can dream.

Yep, I definitely love that video, but if I could, I'd make one small edit to it (aside from deleting the reference to Dick's Sporting Goods altogether -- just like "Visa" kind of cramps the Go World commercials, "Dick's" dulls this one a bit). My edit would be to replace the word "equipment" with the word "medicine." Then it would read:

When mind, body and medicine come together
You are
Untouchable.

*  *  *
Here's just one more reason why I love sports, Bowdoin, and the incredible Burke family. Molly Burke, Brendan Burke's sister, helped produce this video to remind everyone, If you can play, you can play. To read a previous blog I wrote about Brendan Burke, please click HERE.
Posted by Tara at 11:33 PM