Today my heart (and Dr. Bunnell) looked just fine. Just kidding about the second part, although of course, my oncologist is still a handsome guy. As soon as we start talking about cancer, however, he could be Ryan Gosling for all I care; I’d still be distracted by that stupid disease. But I’m getting ahead of myself … let me back up.

The snow was beautiful yesterday morning but not much appreciated as my Mom and I skidded through it on the way to my 8am echo at the Brigham. As the rad tech pushed the gooey ultrasound wand down on my chest, I was so grateful that my gutted breasts had healed. Have I mentioned before how much that hurt the first time around? Oh right, sorry, I have; like seven times.

I didn’t look at the rad tech’s facial expressions as she clicked buttons and asked me to hold my breath. About ten minutes into the test, I glanced at the screen, which was a bad idea. Because when I saw the tech making a green line with the mouse along part of the image of my heart, I figured she found something bad. I spent the rest of the test looking away and trying to calm my crazy brain. When the tech was done and I was dressed again, my Mom and I followed the footbridge from the Shapiro building to the main part of the hospital. Of course, we stopped at the gift shop, which was prepped for Valentine’s Day. How totally fitting after a heart test: 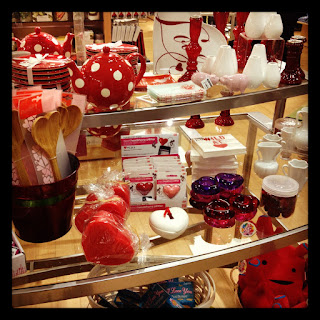 After I waited with the dozens of other patients for my lab work and the insertion of my IV, I headed up for my appointment with Dr. Bunnell. My Mom and I had a few nervous laughs as we waited in the exam room for him to arrive. We joked about that room and all of the fun memories we've made there (read: sarcasm). I remembered our first, most awful appointment and, six week later, the terror of waiting for the official pathology results. I remembered shedding my hair off at my last appointment in that room, just an hour before my allergic reaction. Fun times.

Dr. Bunnell began yesterday's appointment by telling me that my echo looked great. My heart is pumping just like it should, and it showed no signs of any damage from the chemotherapy or the Herceptin. He explained that if they don't see damage after four months of treatment, they usually don't see any at all. This news brought me enormous relief, and I think I’ll be able to set aside the worry about my heart for good now.

Next Dr. Bunnell asked me if I had any questions and I explained that I have been having some random short-lived pain under my arms. He asked me some questions, I answered them, and eventually I came around to what’s really been bothering me. I tried not to tear up when I explained, I don’t want to talk about it now, but I’ve been wondering, What would I feel if my cancer came back? By this point, a few tears were falling onto my new boobs. As he got me a tissue, he answered two words that were probably the best two words he could have said at the moment – “Not that.” Dr. Bunnell stopped and gave us that closed-lip smile as if to say, That’s all you need to know for now. He was exactly right. I just really really don’t want it to come back, I said, trying to stop my crying, and he said that he doesn’t expect it to. I wish he’d just repeat those words a hundred times every time we meet. But then again, the Chief Medical Officer of Dana-Farber probably doesn't have time for that.

After that scary talk, we had a less scary talk about Tamoxifen, which is the hormonal therapy that I began this morning (it’s just one pill a day). As I’ve explained before, from what I’ve seen, Dr. Bunnell is, first and foremost, a scientist at heart. Almost all of his advice is supported by a particular clinical study, the details of which he takes the time to explain despite that I’m not always smart enough to follow along. Dr. Bunnell said that due to a study released just this past December, it’s likely that I will stay on the Tamoxifen for ten years instead of just five as was previously discussed. I’ll get back to this topic, because it turned out to be a huge one.

Somewhere in that conversation about ten years versus five, I said something about how in five years who knows what they’ll have to cure breast cancer – Maybe they’ll have something that will knock it straight out of the park. Dr. Bunnell’s response put everything back into perspective for me – Well, Herceptin already pretty much did that, he explained. I should never have underestimated the power of my greatest Ally. I teared up again at the thought of how grateful I am for the relatively new drug that travels through my system unlocking the HER-2 protein on my healthy cells so that they don’t turn into cancerous ones. No matter how many times I write about it, I could never fully express my appreciation.

We talked with Dr. Bunnell for almost an hour yesterday, the last part of which covered the possible, though highly improbable side effects of Tamoxifen. Let’s just say that if one of my legs swells, I’m heading straight for the nearest ER. As for symptoms I am likely to see, Dr. Bunnell noted hot flashes, but explained that they don't necessarily mean that I'm going through menopause. He also warned me of incorrect literature that the drug can cause weight gain and mood swings. I nodded and withheld a joke about his thoughtlessness in not allowing breast cancer patients to have Tamoxifen as an excuse for gaining weight and being moody.

When we were done, it was time for my Herceptin. We had already been in Longwood for almost five hours so my Mom and I were both dragging a bit, but the 30-minute infusion felt like a drive-by to the chemotherapy suite. I barely had time to finish my lunch and I still can’t believe how much easier it all seemed compared to the desensitization process. It was like swinging 13 bats then swinging one.

After my infusion, it was almost time for my appointment with Dr. Fasciano. I hadn’t seen her in six weeks, and that meeting took place during chemo so I barely remember anything that we talked about. I may even have fallen asleep mid-conversation (this time with the excuse of lots of Ativan and Benadryl). Before that, I hadn’t seen her in months so it was time for a good chat with someone who had earned a doctorate degree in psychology.

I aired some dirty laundry in that appointment, and I cried more than I have in a while. I had absolutely no intention of doing either, but once I sat down, I couldn’t help myself. It was so nice to be able to talk openly to a smart, kind, calm, and honest person without worrying about her having to carry around any baggage afterwards. That 45 minutes was exhausting, but enormously helpful to my mental health. In fact, it was even more therapeutic than the quick stop at the Container Store that followed. Nothing like a stack of illuminated boxes to make me smile. 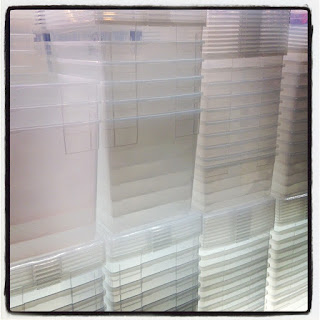 What followed last night were things that I will write about in a separate Word document. It was one of the most difficult nights in this entire ordeal, which is why this space will provide some much needed therapy today. But in all honesty, I am not sure that I will share the rest of this piece with the wider world. Because last night, Brian and I fought, and that's some dirty laundry that may not need to be aired right now. It started over something dumb, but it snowballed from there and we both got really upset. I include this part not to be like that annoying kid that told you that she had a secret then refused to reveal it, but rather, so I can be honest about the fact that a serious illness can put a lot of stress on any relationship, no matter how much love is at the root of it.

Brian and I worked through things last night and ended up with a good laugh and a good bowl of ice cream. But my eyes were really puffy by that point.

The worst part of the whole night wasn't about our fight. It was about the ten years of Tamoxifen. Because last night, I was leveled by a tidal wave of emotion that I never saw coming. I was leveled by the realization that I will never have another biological child. Even now I can barely type through the tears. That doesn't mean that I need anyone to call or come over or say anything to make me feel better. It's just a reality with which Brian and I need to deal. I just don't think that either of us were ready to face that reality last night.

I'm pretty sure that Brian has only missed two hockey games in his entire coaching career (and both of our kids were born during hockey season). The first one was in December 2009 when he came with me and my family to Long Island for my Grandma's funeral. The second one was last night.

After we picked ourselves up from a pretty low place, we made our late night snacks. Kidding around, I grabbed the little Daily Mood pad that my Mom bought me at the Brigham's gift shop. This is a little stand-up pad of paper that includes great adjectives to describe different moods. There are word origins and funny things on the back of each card. Maybe this one fit me:
Meanwhile, Brian found out the score of his game via text. They won 7-0. I asked him the score of the other game that he missed years ago. They won that one too, 9-1. Brian took the mood pad, flipped to this one and said that judging by the score of the game tonight, it was perfect for him. 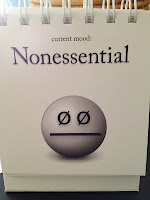 I laughed for a while over that one. I assured him that he's very essential. Because even if Brian's team can win without him, I definitely can't.
Posted by Tara at 12:50 PM