A Few Feet of Vision

After my last Herceptin infusion, I met with Dr. Fasciano. I’ve started to call her “my therapy lady" because I really don't know what else to call her. Calling her "my therapist" makes me sound like I have a lot more money than I do, and truthfully, insurance somehow covers these appointments. I also have always assumed that people go to their therapist to dip their feet into a problem, wade in slowly and carefully. But poor Karen; I don't dip or wade or enter into our meetings slowly or gracefully like I see in the movies. I try to, but I think Karen has this spell over me so that when I see her, it's more like the end of a game of Connect Four. 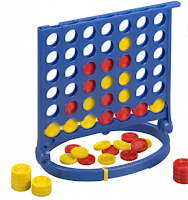 Have you ever played that game? My kids haven’t, but they’ve dropped the little yellow and red chips into the blue fence thing a thousand times. At the end of the game, once all the pieces are lined up in the holder, you release the bottom and all of the pieces fall into a mess on the table. There's no slow or neat way to do it, at least, not that I know of.

That’s me with Karen. I walk into the consultation room on Dana-Farber's Yawkey 9 with all of my pieces lined up. Those pieces aren't necessarily in order, but at least they're in place. But when Karen shuts the door and sits down, I feel like someone released the little lever on my mind and a million little pieces fall into a messy heap at her feet.

Talking to Karen is so liberating because I don’t feel like I need an edit button with her. I can dump any thought on her, no matter how dark or scary, and I don't have to worry that it's is going to make her sad or fearful, or that it will keep her up at night like it may keep me. I don’t need to worry that she’ll worry.

Of course, this doesn’t mean that Karen doesn’t have feelings because I know that she does. It’s just that I'm sure (unfortunately) that Karen has had so many pieces dumped, placed, or even thrown at her feet in those consult rooms at Dana-Farber that my pieces won’t cause any particular effect. I would be so awful at doing what she does. Five minutes in, I'd be sobbing and my brave patients would be counseling me.

Anyways, last time I met with Karen, I think I know what she was thinking about ten minutes into the appointment. Listen, girl. If you’d ever just stop talking, I think I could help you. But I couldn’t stop talking. I told her about Teddy and some trouble he’d been causing at school. I told her about Grandma Kosta and Brian and his eulogy and all that Brian’s mom had done for her. I talked and talked, as if no one would ever listen to me ever again.

The time before that also included a heck of a lot of Tara talking, but I cried some too. That day, I dumped a whole lot of heavy and confused pieces into the pile -- I told her about how scared I still was sometimes, and about how hard I thought it was to come out of the crux of my treatment. What's so great about Karen is that she doesn't try to connect all the pieces back up in 50 minutes. Instead, it's like she tries to look at just one or two of the pieces, and tries to find the right place for those few pieces so that ultimately, they can all line up better.

In our second to last meeting, I told Karen about my writing; about how much it means to me. I can’t remember if she asked me why it means so much or if by that point, I was literally asking myself questions and answering them. Either way, I remember exactly what I told her. Because if I die, my kids will know me. It wasn't the only reason, for sure, but it's what I first blurted out with that edit button shut off. It's a total bummer of a thought, I know. But that was me for the first 20 minutes of that therapy lady session -- being a total bummer.

I’ve written before about how this blog is like a sort of life insurance policy for me; a way of having an ounce of control over a universe that is uncontrollable. Every time I hit Save on a blog, or better yet, when I Publish, a little part of me gets pressed into stone -- just like those dinosaur fossils that Dr. Scott the Paleontologist teaches us about every morning when we watch Dinosaur Train. Those fossils make me feel better. Ironically, they make me feel alive. They save my life. Both literally and figuratively.

This is where the idea that I wrote about earlier this week begins -- at the concept that writing saves lives. I know it may sound depressing when I put it in this context, but that context is just one of the many angles of this prism, and I'll write about others soon enough. Ultimately, I promise that the concept is a joyful, fun, and very uplifting one.

Writing Saves Lives. It's my vision and small pieces of that vision are becoming clearer and clearer every day. Like Anne Lamott wrote in the last quote I shared -- I can't see more than a few feet in front of me. But that's OK. Because I really do see and hear and feel those few feet. And they look bright, sound beautiful, and feel absolutely awesome.
Posted by Tara at 4:37 PM