When my sister, Rachel, and I were kids, we told each other that if one of us ever got cancer, the other one would shave her head. Thinking back, it was a really odd conversation to have had, but Rachel and I have had, and continue to have, all sorts of odd conversations. Just for the record, I think that the oddest conversations we've ever had took place when we waitressed on Long Island together in college. Neither one of us has ever been good at being bored and at the beginning of a shift when things were slow, we'd stand around together trying to keep ourselves entertained. We used to joke about how miserable we'd be if we had to waitress for the rest of our lives (no offense to waitresses -- it just wouldn't be a good fit for us long term; me because I hate unhappy people telling me what to do and Rachel because she doesn't like to stand up for too long).

Where was I? Right, Rachel and my pact to shave our heads. So, here's one small reason why I absolutely love my sister -- when I went bald from my chemo, Rachel didn't shave her head. Instead, she told me that I looked beautiful, though was honest and straightforward about her opinion that I looked better with hair than without. Then she told me there was no way she was shaving her head, despite our decades old pact, because she'd "look like a pumpkin" with no hair. She wouldn't look like a pumpkin, but that made me laugh. On her next visit to Boston, Rachel showed up with hair extensions. No joke, she did, not for any other reason but that she wanted her hair to look fuller. And it did. In fact, it looked incredible, and I told her that in all sincerity.

Annabel reminds me, and a lot of people in my family, of Rachel. They really are so similar in the way that they march to the beat of their own quirky, fabulous little drummer. For instance, this was Annabel tonight: 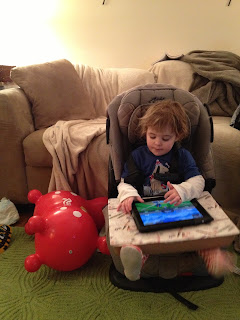 Yep, that's just how she wanted things. Rachel's the same way. She doesn't care what people think -- she knows who she is and what she wants and she's not afraid to speak her mind. I love her spunk and I love that Annabel has it too.

Unfortunately, Annabel doesn't get to see Rachel very often and when Rachel comes to visit, Annabel isn't usually nice to her at first. Part of me thinks that Annabel is punishing Rachel for living far away.

Last Monday afternoon, Rachel visited. Annabel gave her a total 'tude at first. But it turned out they just needed a few minutes alone, because when I gave them that, I ended up finding them both dancing to the Gangnam Style YouTube video together -- pumping their fists in dorky unison.

Rachel really is so wonderfully refreshing. Where I can default to being serious and no fun at all, Rachel defaults to a good time. She has this term she made up to describe people whose presence makes a situation better; more meaningful, more fun. She calls those people "value added." Rachel is value added. She can make a lazy afternoon come alive with a silly dance, and everyone's happier because of it.


*  *  *
The first thing I did when I got to my office this morning was dial the number that my Mom posted in her Call to Arms entry. The Sean fellow that my Mom mentioned picked up, and he really was as nice as she'd described. I explained to Sean why I was calling -- that I was curious about the bone marrow registry. He gave me the number of the National Marrow Donor Program (NMDP) that is affiliated with Dana-Farber (866-875-3324) and we talked for a few minutes about the program.

Within 20 minutes of leaving a message for the NMDP, a kind woman called me back. She sounded excited to have a new donor. I had to break the bad news to her that I had an important question first, one that could put me out of contention. I told her about my cancer. She responded that, unfortunately, I would need to be "deferred" from the program. In other contexts, I understood deferred to mean delayed. Was this what deferred meant in this context too? I asked the woman if she meant that I could never donate my bone marrow. She said that was correct -- anyone who has received chemotherapy or radiation can never donate bone marrow, for your good, and for the good of a potential recipient.

When I hung up the phone, I felt rejected. Like my bone marrow wasn't good enough (because it wasn't). Then I remembered that getting on the bone marrow registry was not about me feeling good or bad about myself. It was about sick people finding the life saving match that they need.

Still, I felt like damaged goods. To make myself feel better, feel useful, I decided that I'd try to find one person that would get him or herself onto the registry to fill the theoretical spot that I couldn't stand in. I didn't know how I'd do this but I decided not to use my blog for that purpose. I don't enjoy being preached to about the same thing over and over and I didn't want this blog to start to feel that way. Then I put the issue in the back of my mind because I had to get to work.

When I sat down to write this blog tonight, I started my first paragraph with the news that I was, in fact, correct in my initial instinct that people don't want my blood, platelets, or bone marrow (although Sean did confirm that I can donate blood and platelets in five years). As I was writing, with no real idea where I was headed (like usual), I got an email from Rachel. She was writing about the bone marrow registry.

It was clear from her email that Rachel had done her research. She told me facts I never knew -- for instance, that the cheek swab gets a person in the bone marrow donor registry but only one in 540 people in the registry will ever be a match, and thus, be asked to actually make the donation. Then she told me that she just signed up for the bone marrow registry. She told me that she never would have done it if it weren't for me. I told her that I never would have thought of it if it weren't for Mom.

Rachel and I pretty much never talk about my cancer but tonight when I called to give her the heads up that she'd be featured in this blog, we talked for a few minutes about it. I asked her if she'd be OK with me writing about our pact. She said, Of course, as long as you don't make me sound like a big jerk. I don't think I could do that because she isn't ever a big jerk.

The truth is that Rachel shaving her head wouldn't have helped me. If it would have, I know Rachel would have shown up on August 8th with no hair. I can see how the gesture could help others, but the whole hair thing just isn't a big part of this journey for me. Rachel shaving her hair off would have been needless drama for both of us and we definitely don't need needless drama right now.

I love my sister because she adds value where value needs to be added. When we were kids, we must have thought that matching shaved heads would prove how much we love each other. But now we're older and it turns out I don't mind being bald and Rachel likes her hair extensions. It also turns out that Rachel, even from Virginia, still has the uncanny ability to know what I'm thinking. The only thing that could have made me feel better after I heard that I could never donate my marrow was to find someone else who could. Thanks to Rachel, I didn't even have to go looking.

A wonderful Canton mother that I met through Brian's hockey team left a poignant comment on my Frank blog today. Until reading it, I had no idea that bone marrow transplantation will hit her family so close to home. I also had no idea that siblings have a 50% chance of being a perfect match for each other. I hope I never need Rachel's bone marrow, but I'm thrilled to know that if someone else does, she is ready for them. And I can't help but smile at the fact that her marrow may be identical to mine.
Posted by Tara at 11:36 PM