Today, after four days of the inside of my mouth bleeding every time I eat or brush my teeth, I decided to send a message to Dr. Bunnell's office. At this stage, I'm not sure if I should contact my PCP for stuff like this, or call my oncology team. Since I want to rule out any cancer-related reasons for this development, I opted for the group that could make those calls the fastest.

An hour or so later, Danielle responded and told me that my mouth troubles could be some residual effect of the chemo. To be honest, I don't really believe her because I feel like the chemo has been out of my system for weeks now, but I often think that I know more than my doctors and I always end up being wrong.

Either way, Danielle wants me to come into Dana-Farber tomorrow to have my platelets checked. I know, you're going to think I'm making this up -- like it's some pathetic ploy to get you to take my mother up on her platelet donation offer. Trust me, I couldn't make this up if I tried. I guess that's what I get for writing about my "sacred" time at Dana-Farber -- another unplanned trip there.

I'm eight weeks out of my last chemo treatment and two weeks out of my last Herceptin infusion. Aside from the lingering pain in my right arm along the still-bruised vein, my symptoms have been non-existent. I can feel my fingers and my toes, I'm not nauseous or achey, and I haven't had a nosebleed since January. Seriously, I feel great.

My hair is coming in fast and 50% of the time, that fuzz feels like soft proof of my sweet victory. Forty-five percent of the time, I don't really care about my hair one way or the other, 3% of the time I think that I'll miss having hair (or no hair) that was so easy to care for, and the last 2% of the time, I have bad thoughts. In those 2% moments, I have thoughts as dumb as -- If my hair can grow back this fast, does that mean that cancer can too? I hate my brain sometimes.

Since I'm on the physical update theme, I'll run with it and spend a few paragraphs giving Maggie credit for two things that, back in January, she told me may happen to me after my chemo was done. First, she told me that my eyebrows could still fall out. I didn't think mine would fall out at that point if they hadn't already but low and behold, she was absolutely right. A few weeks ago, I noticed a dramatic change in my eyebrows as they faded away. I still have some semblance of eyebrows, but they're pretty weak. My eyebrow powder has become my favorite item of make-up although I don't brush it on every day (apparently I can't spare that 60 seconds every morning). I realize it must be strange for people to see me with eyebrows one day and without them the next but I like to keeping people guessing.

The second thing that Maggie told me about happened to me last Friday. Wendy had come into my office so that we could walk over to the federal building for an appointment regarding her employment authorization documents. On our way back to my office, we passed by a group of men outside the New England Center for Homeless Veterans. There were about five or six men standing in a loose group smoking their cigarettes. When Wendy and I walked by, one of the men -- a middle-aged black man -- yelled in my direction, "Hey, I like your haircut!" I turned to look behind me but no one was there. "I'm talking to you!" he said smiling at me. "I like your haircut!" he repeated, eyebrows raised, as if I should have caught it the first time. I had a split second flashback to Maggie telling me that when her hair started to grow back, black men would often tell her that they liked her "haircut." Then I started laughing -- one of those laughs that you just wish the other person was there with you to enjoy. The compliments didn't stop there, as a few other men -- each of them black too -- remarked on my haircut. I won't lie; I loved those compliments.

Of course I told Wendy the whole story about what Maggie had told me and why I got such a kick out of the mens' comments. She laughed with me and let me take a second to text Maggie. Then she told me that in Africa, my haircut would be totally normal. No one would even think you are sick, she explained. Neat.

Onto another topic. I have a general rule that talking about body weight is absolutely pointless. But I do want to mention something about it in this physical update context. In the few months after I was diagnosed, I lost weight -- over 15 pounds. I lost weight mainly because I was too sick-to-my-stomach with worry to eat enough, but also because I started to avoid sugar in order to starve the tumor and it turns out that if you don't eat sugar, you can't eat lots of yummy fattening treats.

If someone asked me before cancer if I'd like to lose 15 pounds I'd have said yes. But once it happened that way, I hated it. I felt sick and frail and not myself. Aside from the 60 pounds that I gained when I had Teddy (yes, 60, that wasn't a misprint), and the 45 I gained with Annabel (at least keeping me lighter than my husband), I have always been a pretty consistent weight. Dipping too far below that made me feel like I was losing part of myself. It scared me.

Now that I've gained most of that weight back, I feel good. I feel like myself; like how I should be. I write this now just in case someone out there ever shares the worry that I had after my diagnosis that I'd never be able to eat like a normal person ever again. Rest assured, I'm right back to trying to resist my fourth piece of pizza because really, three should be enough.

Lastly, I've watched a funny thing happen to my fingernails. I could be making stuff up, but it seems as though chemo put a sort of dent in each of my fingernails around the same time. It looks like this: 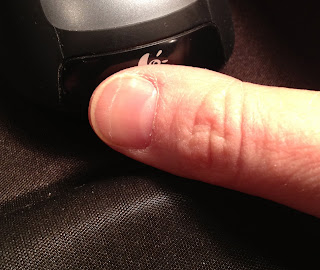 I have slowly watched the dent move up my nails and I figure it's a few weeks away from being gone altogether. I couldn't care less about my nails and I'm sure you couldn't either, but my dented little fingers keep typing anyways. Like this story that they seemingly want to spell out ...

On our honeymoon, I got my first and last pedicure. It was in a windowless room so I was already feeling claustrophobic and fidgety by the time I sat down. A young woman came over and I tried hard not to find it strange that she was touching my feet. I tried to make conversation to distract both of us. After five minutes of me painfully trying to keep up that conversation, the lady handed me a magazine and told me to relax (with a Please shut up tone rather than a Please enjoy yourself tone). I told her that I wasn't good at relaxing. She just made one of those Humf fake laughing sounds and I could tell that we were as bonded as we were ever going to be. After that experience, I deemed myself no good at pedicures.

Since we've covered the physical update, we may as well move to the mental one. I could sum that up pretty easily by describing what goes on in my head every time I see blood on my napkin. Goodness no! I must have gotten that type of cancer that you can get from chemo. It's OK though. Robin Roberts got it and she looks great. I'll just need some bone marrow. Gosh I hope I can find a match. Rachel's got to be a match right? I know, it's crazy, but it's the truth.

Today I told my Mom about my crazy thoughts, which was a really selfish thing to do because it was her birthday. But I was a bit too worried to care about being selfish, which stinks. Anyways, a while later, my Mom called my office back. She told me that she had done something we never ever used to do. She Googled my symptoms. I couldn't believe that she garnered that bravery, and I remarked on that before I even heard what she found out.

It turns out that my Mom found a patient board that included lots of different comments about women's mouths bleeding while they were on Herceptin. Excellent news! Wait -- talk about selfish -- that didn't come out right, but you know what I mean.

This is a tough stage for me because I attribute any little pain, or any little feeling out of the ordinary, to be cancer. Headache? Cancer. Tickle on my numb boob? Cancer. Hair growing back? Cancer. Urgh. Cancer really can be a terrible terrorist.

You know me enough to know there's no way I'm ending a blog with a sentence like the previous one. That's just bad karma. So instead, I'll emphasize my favorite part of this story...

Today I wrote out my Mom's birthday card. Among other things, I told her that she is the strongest and bravest woman I'll ever know. She really is, for lots of reasons. But today, it's because she found the courage (that I still don't have) to enter some search terms into Google and scroll through the results. Those results put my mind at ease.

Of course, Google can't do it all, so my Mom will still find a way to join me at Dana-Farber tomorrow for my platelet check. We'll sit together in multiple waiting rooms and she'll patiently listen to me as I blab away about something -- probably Teddy or Annabel or Writing Saves Lives. I'm so lucky to have her. And I'm so grateful to know that she'll never hand me a magazine and tell me to relax. Because I think she knows that me blabbing to her is the best form of relaxation I'll ever find.
Posted by Tara at 10:39 PM