I don't think a day goes by that Brian or I don't say to one another something about how much we love our house and our neighborhood. We moved in three and a half years ago, so I would have thought that our love affair would have been over by now. But it's not, and every day we are thankful for our home.

I grew up in Canton, but amazingly, until Brian and I were looking to buy a house, I had never even driven down the street we now live on. In fact, the first time I ever drove down our street was to attend an open house at another house on the block. The open house was packed, and the moment we walked in, we knew that there had been a mistake. There was a mistake -- a misprint in the Real Estate section of the Boston Globe which had the house listed for $200,000 less than its actual price. We had looked at enough houses by that point to know that this one was not in our price range, but we were already there, and always curious, so we looked around anyways. It was beautiful, but we quickly brought ourselves back to the reality of what we could afford.

Some weeks later, Brian found an ad for another house on that street that we had liked so much. One afternoon, we buckled Teddy into the stroller and did a walk-by -- just to be sure that there wasn't another price misprint. The house was imperfect, but in all the right ways for us, and we felt like it would be a safe, comfortable, and really happy place to raise a family. A few days later, we made an offer, and a few months after that, we moved in.

Since we moved into our house, Brian has spent countless hours improving it. If I had to choose my most favorite thing that he has done, it would be the renovation of the screened-in porch.

In the spring of 2010, Brian and his dad literally poured their blood, sweat, and Teddy's tears into that porch. I remember coming home from work and being amazed by all of the progress they had made every day. But even better, when I was there to hang out with Teddy while they worked, I remember loving the sound of Brian and Paul working together. They are two of the most patient people I have ever met and the usual frustrations that accompany any home project didn't bring them down or make them bicker. They just genuinely had a great time working on that project together -- even if they were driving to Home Depot for the third time that day, shoveling critter poop out from the ceiling, or carting away the fifth pile of splintery old wood panels.

Here's some proof of their awesome handyman skills ... 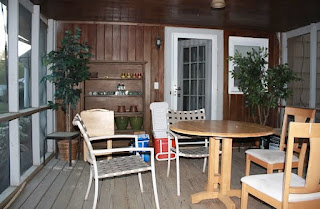 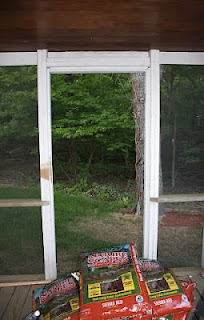 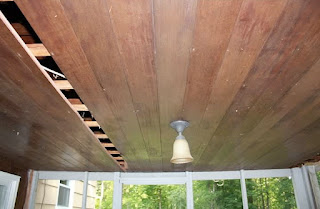 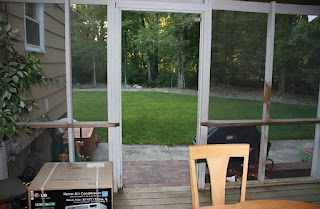 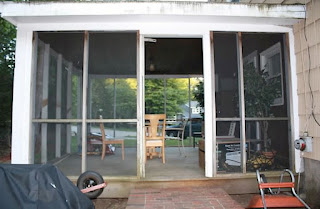 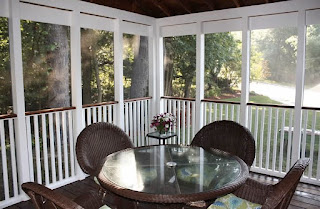 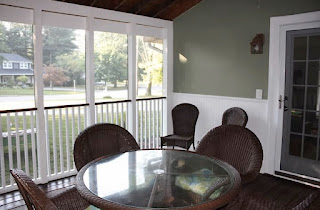 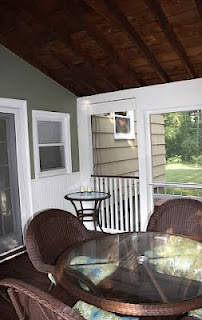 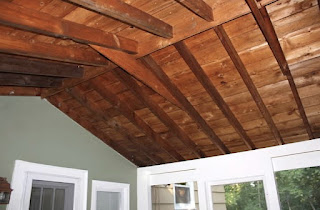 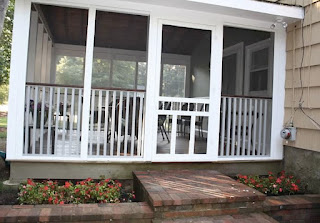 Impressive right?!? I still think so. But I didn't chose this topic tonight because I wanted to brag about the Shuman handyman (or woman) skills (keeping open the possibility that Annabel chooses to follow in her Dad and Papa's footsteps). Rather, I was just thinking about this upcoming week and that porch, and I started to write.

Some of my best memories in our house have been on that porch. Brian and I have sat out there alone countless nights talking about absolutely nothing and enjoying a cold drink and some good music. We have gathered with friends out there and laughed until we were all so tired we could have fallen asleep in our chairs. We have served burgers and hot dogs to Brian's former hockey players, and celebrated birthdays, retirements, and graduations over other tasty treats.

I remember being out there the Saturday before I was diagnosed -- sitting around with Brianne, Seamus, Brianne's sister, Elise, and a few other friends. Brianne and Seamus were just back from their honeymoon trip to Europe and it was so great to see them again. I didn't want to be a downer, but that lump I felt the night before was heavy on my mind. So I tried to joke about my hypochondria and the lump, looking mainly at Elise when I did so. I watched her reaction carefully, seriously. Elise will graduate from medical school this spring and I wanted her and her knowledge to make me feel better. Like the great doctor she is sure to be, Elise didn't brush me off as crazy or scare me any more. She just asked me if the lump had changed at all. I don't know, I just felt it. I told her I would go to the doctor that week and she agreed that that would be a good idea.

Just a few days after that, and almost exactly six months ago this week, I sat on that porch so sick to my stomach that I fought back the impulse to vomit all over the nicely stained wooden floor planks. The porch was the only place in the house that I could be sure that the kids wouldn't hear me deliver the bad news to friends and family. More importantly, it was where they wouldn't be able to see me cry.

I remember looking at those floor planks when Sara told me about Maggie and that her own brother was now cured of his cancer. I remember staring through the glass table as the director of human resources at my law firm told me the details of my six-month medical leave. I sat out there with my Mom's incredible friend, Paula, on the day before my surgery, while they both convinced me that I could do this. And Brian and his friends sat out there for their Fantasy Football draft while I wrote my POST about finding out that my tumor was likely HER-2+.

So here I am, on the eve of my first week officially back at work. I won't be riding the train in tomorrow, of course, because I've carved out my Mondays to write. But just tomorrow, I won't actually write, because it's my last day to prepare for Wendy's hearing on Tuesday. So I'll do that instead, because Wendy's case is one of the few things that takes precedence over this space.

Last August, my family and I went to Falmouth for a week of vacation. We rented a beautiful house with an awesome pool. Last week, we were all brainstorming where we'd like to go this summer and we talked about that house in Falmouth. In the end, we all decided that we couldn't go back to that house -- to that front lawn where we stood to hear if I carried the BRCA gene, to that dinner table where I broke down and sobbed that I just wanted to be there with everyone next year. It was just too connected to the awful time before my surgery; the terrifying, can't-sleep-at-night unknown of a cancer diagnosis. So we'll make some new memories this summer, in a place that doesn't have such a dreadful fear attached to it.

I don't want to go back to that house in Falmouth, despite that it was wonderfully comfortable. But something is much different about that porch. I can't wait to sit out there when the weather warms up, even though I'll never forget all of the tears that were shed within those screens. Because in the end, I love that Brian and his Dad rebuilt that porch; took something that was damaged, broken, crumbling to pieces...and made it all better.
Posted by Tara at 9:30 PM