Most of us would likely agree that it’s not easy to talk to someone who is, or recently has been, battling through a crisis. In these conversations, there are several impossibly fine lines for the person outside the circle to walk: the line between sympathy and pity; between concern and intrusion; between empathy and self-preservation; humor and respect; light and heavy. Come to think of it, I can’t believe anyone even talked to me between August 8, 2012 and early 2013. Such brave souls they were.

I should really just stop there, especially considering the dumb things that have come out of my nervous mouth. I should just forget the outrageous things that people said to me, chalk them up to understandable falls on the wrong side of those lines. But that wouldn’t be fun, now would it?

One of the first quotes that pops into my head is a simple one from my OB. Per Dr. Bunnell's instructions, I went to see her soon after my diagnosis. With a look of utter shock at the news, she said pitifully and frightfully, “And it’s HER2? Gosh.” Yeah, Gosh. I had some other four-letter words in mind, but I guess "Gosh" captured it. She didn't seem to know about Herceptin so I told her about it. It's a miracle drug for HER2+ patients. She felt better. Thank goodness.

Then there was another woman who told me back in September about how she had plans to walk in the breast cancer walk for her cousin who passed away from the disease. Gulp. That scares me, I explained instinctively, far too focused on myself to notice that she had her own difficult circle. But they have Herceptin now, I explained. Unfortunately, she continued on. Actually, my cousin was on a clinical trial for Herceptin. But don’t worry, that was before they knew how to use it. OK. I won’t worry.

Another really classic moment, probably my most favorite, occurred at the La-Z-Boy store on a summer afternoon when I went with my family to pick out my Bognanno-family-sponsored healing chair. That was a tough day to begin with, but when the sales associate described the warranty for the recliner by explaining that it will be valid for 25 years or for the duration of your life, “whichever is shorter,” I really had to laugh out loud, mainly to stop myself from puking all over the counter.

Anyways, I arrived at this topic earlier in the week because a family member of mine had written something to me that hurt me. It wasn't like the mostly humorous quotes above and the details don’t matter. The bottom line was that after I read this sentence, I felt some anger, sadness, and confusion. Mostly, I felt disbelief that someone would write such a thing.

For the next day, I grappled with what to do. Should I tell her that what she wrote had hurt me? What would be the purpose of doing so? Would it get me anywhere? Would she ever change? Could she understand how hurtful her comment was? If not – if there was no mal-intent – then should I just forget about it altogether? Was it "the thought that counts?" Maybe, but what the heck was she thinking?

I was so tangled inside that I had to do what I always do – I wrote. I drafted an email to this person, not set on sending it, but set on getting my thoughts and emotions straight. I sent the draft along to Brian, my Mom, and Rachel for their thoughts.

Rachel wrote me back the most thoughtful response. Very diplomatically, she tended to think that I shouldn’t send the email; that even though this relative had disappointed me so, there were countless other people from all different parts of my life (as well as many strangers) who were so unbelievably good to me. Essentially, Rachel said that I should focus on the positive and not bother with the negative. She said it in a much more eloquent way, but that was the gist. When I was done reading, I was convinced she was right.

A while later, I talked to my Mom. Essentially, she said she needed more time to think but her first reaction was that I should strengthen a few points and eventually feel free to send it along. My Mom was pissed, for me. We got into a brief discussion of whether it was worth calling someone out on something hurtful he or she said or did; whether people can ever really change. After I hung up with her, I was back to thinking this had to be done, even if I didn’t want to do it. But I was still a chicken so I decided that Brian would be the tie-breaking vote.

Brian and I talked about it that night as we grabbed a quick dinner out. We debated all sorts of ways I could edit the email – whether I should add to it, delete from it, calm it down, beef if up. Whether it was even worth all of this time and effort. We never came up with a clear plan before our food arrived and we got distracted, but we both agreed on one thing – that in the end, people will never change if they aren’t called out on bad behavior; if they aren’t told – what you said hurt me.

Still, I went to bed on Tuesday night wondering how I would deal with this.

When I woke up bright and early Wednesday morning, my mind was focused on the day ahead. My Mom and I had to be at the Brigham by 7AM for my echocardiogram, prior to my treatment. Given Herceptin’s possible side effect of congestive heart failure, my doctors continue to monitor my heart and this was my third echo since I started chemo. (I wrote about my first one HERE.)

Just after 6AM, I opened the front passenger side door of my Mom’s SUV. When I did, I was absolutely shocked at what I saw. My Aunt Helen and my cousin, Kirsten, were sitting in the back seat. I was literally speechless, mainly because they live in New Jersey. All I could get out was that I hadn't even showered yet, and as usual, they both looked so beautiful. And all I really remember them saying was, We couldn't miss it.

I haven’t been 100% surprised many times in my life. In fact, aside from having a baby girl, my siblings surprising me with hospital visits when my kids were born, Rachel’s re-done binders, Brian’s pink hockey jersey, and a party that some friends had for me some years back, I don’t know that I’ve ever been surprised like this. I just couldn’t believe that they would drive all this way to spend one day with us. It was a very special day, for sure (the very first Writing Saves Lives writing workshop), but seriously, ten hours of driving in the middle of the work week for those two measly hours? Unreal.

In fact, that kindness has been nothing short of remarkable. I hesitate to give examples only because there are so many of them and I'd guess there will be people out there (like me) who will search through these next few paragraphs for the kind thing they said to me or did for me. Trust me, I remember, and more likely, I already have a blog forming in my head about it (yeah, I don’t plan to stop writing anytime soon). But to give a small flavor of what I’m talking about, I wanted to mention one more example.

Way back in the fall, my friend, Liza, planted tulip seeds (or bulbs, or whatever it is that makes flowers) in the corner of our backyard. Until Tuesday, I had forgotten all about those seeds. But as the sun set on that beautiful day, I peeked out our back window and caught sight of a little patch of tulips. They glowed. 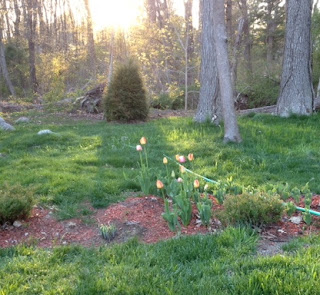 I opened my mouth to ask Brian when he had planted those flowers but I stopped when I had a vivid flashback to Liza telling me that she had planted something in that corner of the yard. She didn't make it a big deal in the slightest -- she had just been over one night, snuck out, and later on, told me that the flowers would blossom in the spring.

When I texted Liza about how much it meant to me to see those flowers bloom, she remarked on how far I've come since those bulbs went in the ground. What a beautiful thing to say.

I am still completely undecided about what to do with the comment that hurt me. Maybe I'll decide on a whim one day to send the email I drafted. Or more likely, enough time will drift by and I'll just consider the issue shelved away with other old news.

A dear friend of mine, Lynne, sent this Maya Angelou quote to me a few months ago:

I hope I never forget the flowers that Liza planted for me, the surprise trip that Helen and Kirsten made, or the binders that Rachel made me. And perhaps I am never able to forget the ridiculous sentence in that card or how my OB responded to my cancer news. But hopefully, I'll be blessed with many more years, and my memory of those details will fade gracefully. If it does, I agree with Maya Angelou that I will never forget the way that those things made me feel. Because words are very powerful things. As hard as it is, sometimes, we have to be careful with them -- use them delicately -- as if something could break if we drop them, or something could blossom if we use them just right.

*  *  *
Today I flipped my little office calendar to May. How perfect. 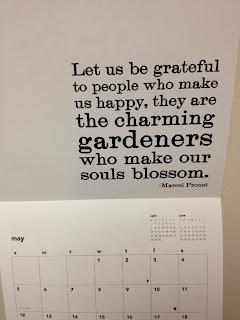 Apparently last night's post has caused some panic among my female relatives as they worried that they were the culprit of the words that hurt me. Maybe I should have used "he" instead of "she" since guys never think they're the culprit of anything (wink). I feel badly that I've caused worry and perhaps this was one of those posts that should have remained in the Unpublished category. But what's done is done, and since I can't un-publish it, I'll just have to do a little more explaining.

Like many people, I am pretty resilient. Although I cry at the drop of a hat about certain things, it takes something significant to personally offend me. (I mean seriously, being called a terrible four letter word beginning with "c" didn't even offend me.) Regardless of what the above post may suggest, if a small statement hurt me as much as this one did, clearly there's lots more beneath the surface of that relationship, and in this case, I am starting to understand that there is.

I know how hard it is to choose the right words, especially with a vulnerable person. That's what the very first paragraph above is all about. In encouraging us all to be careful with what we say, I don't mean to imply that we need to write a Shakespearean poem. In fact, sometimes, just sitting there in silence with someone, or holding their hand, is more helpful than words could ever be. Sometimes planting flowers is an act of rescue. And other times, the simplest words are the very best. My cousin, Kenyon, signs all of his emails, We think about you and love you. I am so grateful for those thoughts and that love. It's as simple as that.
Posted by Tara at 9:13 PM