Anger. I've sat down to write a blog about it several times. But every time I sit to gather my thoughts on the topic, I end up somewhere else. I usually diverge by remembering someone who has gone through something so much more difficult than I have -- a mother and father who lost their son; a beautiful girl born with cystic fibrosis; a hemophiliac who received bad blood; a young woman who wasn't yet blessed with two beautiful children before she found her tumor. A cancer patient whose chances are much lower than mine. I end up convincing myself not to be mad; that I have so much to be thankful for; that anger, like jealousy, is a total waste of time.

But then, every day, the anger creeps up on me again. It doesn't ever linger long, but it's there, like a big cloud on a sunny day, temporarily blocking the light and making something warm and beautiful feel so much colder and look so much darker.

So today's the day. The clouds have parted, the sun shines, and the The Anger Blog is going to be written.

Last week after the rad tech applied the pressure of a school bus to my fake left boob, and after my Herceptin once again flowed like water into my IV, I sat down with my therapy lady in the usual consultation room on Yawkey 9.

Of course, I had my draft agenda for our meeting planned out. It was simple -- just one item -- and I thought I may even be released early (silly me).

When we got into the meat of the appointment, I told Karen about how in the last few weeks I had had terrible nightmares all with the same theme -- my cancer recurring. I explained how ridiculous the dreams were -- that there was usually a lump the size of a baseball protruding from some part of my body (never my boob); that I'd wait for the results; hear it was cancer; have to say goodbye. Those dreams were so vivid that I could have woken up and written 20 pages of description on what I saw, heard, and felt in them (though I'd never do such a stupid thing).

While the details of the nightmare would usually fade before lunchtime, the dark feelings left over by the imagined tragedy stayed with me far longer. That darkness was really putting a damper on my sunny days.

So I asked Karen why this was happening to me. Why all of the sudden? Why now? I had gone several months without ever having a cancer dream. Now one or two every night? Please, fix me!

She asked me some questions and we discussed factors that may be playing a role in these nighttime terrors -- the marathon bombings, Betsy's story, Bridget's family. I didn't mention Julia because the list was already long, but of course, I've been thinking of her.

I was hoping Karen would have a quick fix; that she would tell me not to eat ice cream before bed or that I should hum something about nature to myself before I fell asleep. But instead, we came back to what I like to think of as the diet conundrum. How can one lose weight? Diet and exercise. Dammit.

Similarly, in fixing my wacky brain, Karen basically gave me the diet and exercise answer. She told me that the nightmares were proof of anxieties I was having during the day. That we had to address those fears and slowly work on them. That didn't sound fun. What about that plant from Africa that I saw on 60 Minutes a few years ago? The one that was supposed to be the next big thing in the diet industry? Was there no African plant to shut off my crazy mind? Apparently not.

Even though I had vowed to make it a no-crying session (I had a busy day ahead), the tears started to flow. I told Karen about how hard it was to see Bridget's husband holding their youngest daughter. About how mad I was when I looked at those two kids; about how unfair it was that cancer took their mother from them.

Karen handed me the tissues and listened. Then she told me that I have been amazingly resilient through this whole process. That I have every right to be mad and sad and that I have barely expressed those emotions. I had to laugh through my tears because if I looked "resilient" as I bawled my eyes out in my sessions with her, what-the-heck else was she dealing with? Did people throw stuff at her? Threaten to kidnap her for ransom?

Anyways, since Karen told me that I can be mad, I've let myself be mad. Not so much because it feels good (it doesn't), but because if it's the "exercise" that my brain needs to shed those pounds of emotional excess, then I'll at least try it. Until they find an African plant, of course.

The crazy thing about these dark anger clouds is that they show up at the most beautiful places in the most precious times. For instance, this past Saturday morning, they clouded Teddy's first t-ball game for a few scattered, though powerful minutes.

Teddy had been waiting for this day for weeks. Every morning last week, he would wake up and ask me, "Is it May 4th?" We'd count the days out until his "opening day." On my treatment day, I left him a note telling him it was May 1st and while my infusion nurse inserted my IV, I thought of him seeing that note. It was the perfect way to relax and coax the needle into my stubborn veins.

Just after 7am on the most magnificent spring-like Saturday morning, Teddy was up and dressed in his full uniform. Brianne texted me asking me what time the game was. "9:15" I replied. "So late! (says the mother of a newborn)" was her classic response. So true. Annabel had been up since six.

Our wonderful friend, Scott, has started to call Teddy, "Teddy Ballgame" (borrowing from a Ted Williams nickname). I love that name because the kid really is a walking ballgame.

Watching Teddy Ballgame up at bat on Saturday and watching him squat in his fielding position melted my heart. Literally, I felt love physically, in my heart. I know it's cheesy, but I thought of that scene from Field of Dreams where Ray Kinsella looks around at his family and says, "Maybe this is Heaven." It felt like Heaven there at the baseball field.

Sunday was, somehow, even better. It was "Circus Day" as I had been telling the kids for weeks. My Mom splurged and decided that not only did we all need to go to the Big Apple Circus, but we needed to sit ringside. It was incredible. 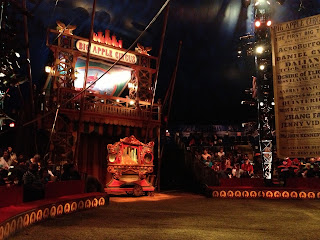 The best part was, by far, watching Teddy and Annabel's expressions at the craziness that is the circus. Annabel sat on my lap for most of the show and I swear, I'd pay hundreds of dollars for a ticket to anything if it means that she will sit on my lap and let me kiss her and hold her hand (even if she pees through her diaper onto my jeans like she did last night). Teddy's not a snuggler no matter what the circumstances, but he let me hug him and he smiled in content amazement when he wasn't too busy eating his bag of cotton candy, two hot dogs, bag of Swedish Fish, and box and a half of popcorn. 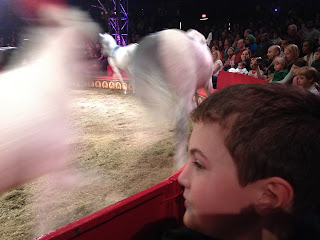 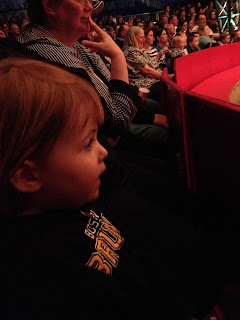 Brian hates the circus, so he was our gracious chauffer. I was glad that he had a few hours of peace (to correct papers, nonetheless). Last night, when I told him all about the kids and how they looked watching the clowns and the horses and the acrobats, he said he wanted to come next year. I told him that no matter how much he hates the circus (or is scared of it (?)), he will love those couple hours of watching the kids enjoy it. He really will.

The t-ball game and the circus were just a few Heavenly slices of this past weekend. But I set out to write about anger, didn't I? Well, here's where the anger clouds roll in. Could they be offensive to some? Yes. But they're rolling in anyways.

Now that I actually try to do it, I really can't describe the intense anger that I feel that cancer could take me off of the sidelines of Teddy's t-ball games or away from an annual trip to the circus. It's so strange to be angry at a disease -- at something that isn't tangible -- that we can't even see. And so, sometimes, for better or for worse, my anger starts to turn to people.

I get so angry at parents who will be blessed with 95 years on this Earth, and who will treat their children like crap throughout all of them. Who will miss t-ball games when their kids are in the field looking for them. Who would never bother to take them to anything fun like the circus. I get so angry at the thought that there are shitty people out there who will live long lives having abused or neglected their innocent children; all while I sit begging a higher power to let me reach 37, desperate to shield my family from pain. Truthfully, I don't know these people, so they're not really tangible targets for my internal anger either, but at least they're more real to me than some unknown chemical or gene that started to make a tumor grow in my boob.

I realize an irony, too, as I finally reflect on my anger -- I realize how much it has helped me through some of my darkest times. Even looking back to the last post that I wrote before my first surgery, I notice references I made to anger. In a way, that anger has helped me focus on what I want and what I need to do to get it. Of course, cancer is not something I can control. I'm still trying to come to terms with that reality.

Yes, my reality, like everyone's, is an uncertain one. Karen always tells me that the realization of that uncertainty -- that vulnerability -- is what makes cancer, especially cancer for young people, so hard. She wants me to "embrace the uncertainty" and maybe one day, I'll get there. But for now, I think I'm only ready for something far more elementary.

Right now, I'm merely trying to embrace moments that feel like Heaven and not worry about how many more of those moments I may have. I'm trying to enjoy the game, the circus, and the sunshine without searching for the next cloud that could move across the sky to block it. 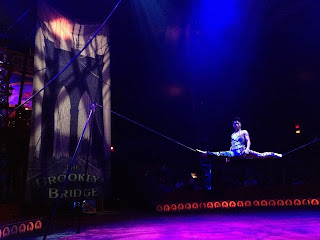