Around this time of year, a lot of people seem to be watching weather reports. I can hear them now -- principals and college deans trying to decide if graduation ceremonies need to be moved indoors; high school girls wondering if the rain will ruin their up-dos for prom; athletes hoping their game doesn't get postponed, teachers hoping their field day does; party planners kicking themselves for not renting a tent; awesome families hoping that their annual softball tournament for their loved one isn't a washout.

I don't usually bother to check the weather forecast, but this week, I have been curiously peeking at tomorrow night's projections. Because tomorrow night, Teddy and I will travel to the one and only Fenway Park to watch the Boston Red Sox take on the Los Angeles Angels.

Earlier this week, a colleague of mine was selling two reasonably priced grandstand tickets for Saturday night's game. The moment I read Angels in his group email, I hit Reply.

Teddy knows almost all of the players on the Angels' roster, as he loyally follows the professionals who wear the same uniform as his Little League team. He even told me the other day that Mike Napoli used to play for the Angels. I Googled it. He was right. It wasn't a stretch to assume that Teddy would love to see his favorite two clubs play one another; he can't wait.

Teddy and I are perfect baseball game companions. We both silently adore the initial sight of the park and the sound of the national anthem. Then we quickly get excited about the many different snack options. We're both totally convinced that we're going to catch a foul ball (we have never even come close), we would rather that the strangers seated around us not bother to make small talk, we love the jumbotron, and we're both ready to go home by the end of the 6th inning regardless of the score.

The only real differences in Teddy and my feelings about a Red Sox game are that I am far less fascinated by the Green Line ride to and fro, I don't need my ice cream to come in a mini plastic baseball helmet for $5 extra dollars (a regular cup is fine), and I couldn't name half of the Red Sox players that Teddy could. In the end though, we both end up in the very same place -- exhausted, full, and in agreement that we had the time of our lives.

I've been watching the forecast this week because at first, I wasn't so excited about sitting in the cold hard rain to watch a baseball game. For me, so much of the joy of Fenway is getting a chance to sit outside with an awesome view of Boston. I didn't really want me and Teddy to be huddled under a poncho.

So I got to thinking about weather, and plans, and weather changing those plans.

My thoughts here have evolved largely because of this quote I came across thanks to Professor Bee who mentioned it at a writing workshop at Dana-Farber this week. In her 1978 book, Illness as Metaphor, Susan Sontag described illness as follows:

I agree with the quote's implication that many of us consciously or subconsciously group people into a "sick" or a "healthy" bucket rather than thinking of ourselves as people who move fluidly between two worlds. I definitely make these oversimplified buckets and even when I do, I feel strange about it. Just yesterday I referenced the time "before I got sick." As I said it, I knew how wrong it sounded. Cancer's just not that simple. Because while the tumor was hiding and growing aggressively inside me, I never even felt sick. I had absolutely no idea that it was there. Finding the cancer and getting treated for it were what made me feel sick. And feel better. See how strange it is?

Susan Sontag's explanation helps me understand my place in, and in between, these two kingdoms. Prior to August 8, 2012, I never would have imagined myself living in the kingdom of the sick, no matter how hypochondriacal I am. But now, I realize that no one, including me, can fully avoid that dark kingdom. At some point, we will all identify ourselves as citizens of "that other place." Unfortunately, some people live in the kingdom of the sick much longer than they live in the kingdom of the well and I hope that modern medicine can improve that terrible imbalance. Some people live deep in the dark kingdom, while others roam around the outer borders. In other cases, one only knows the dark kingdom and none of the lighter one; those are the most rare and tragic of cases. The vast majority of us, however, will be lucky enough to be dual citizens.

Once we learn of our dual citizenship, life changes a bit, or at least, mine sure did.

For instance, let's consider my lead up to tomorrow night's baseball game. Here's what I've been thinking.

I don't want it to rain for me and Teddy's big night out. I want everything to be perfect for him. For me. A great game. A big win. Clear, warm air.

So I watch the forecast. But it's New England, and forecasts can change quickly. So I wonder, What's the point?

I want as many innings as I can get sitting out in the clear summer air at Fenway Park. But even if I only get one inning, huddled under a poncho with my little guy as he teaches me the names, positions, and numbers of all of the Angels and Red Sox players, that's pretty awesome too. So I'll take the one inning in the rain. And I'll cherish it forever. Because sometimes, life in the kingdom of the sick can be even more awesome than life in the kingdom of the well.

As if tomorrow couldn't get any better for the little lad, first thing in the morning he will throw out the first pitch of the 11th Annual Todd J. Schwartz Softball Classic. We are honored that the incredible Schwartz family thought of us and we can't wait to be there with them tomorrow. For Todd. Rain or shine. 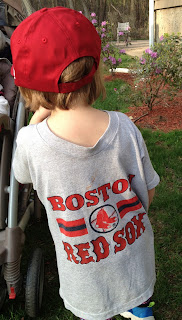