During the toughest part of my treatment last winter, I booked a three-night stay at the Spruce Point Inn for July 4th weekend of 2013. At the time, the medical bills were rolling in by the dozens, but I went for it anyways thanks to the gift certificates to the Inn that we had accumulated from several of our friends, family, and colleagues. Plus, Spruce Point had sent us a free two-night stay after they learned about my cancer, so we had every reason to splurge without really splurging.

Despite the Ativan, steroids, Benadryl, and chemo, I vividly remember unwrapping those gift certificates several months ago. I remember crying; partly because I hoped to a higher being that I would be well enough to go back to that place Brian and I had been married, but mostly because I could not believe that people we knew could be so thoughtful and so generous to send us back to one of our favorite places on Earth.

Those good people probably never knew it, but the gift certificates were more than just converted money. Many times, they were the distraction I needed to get from one moment to the next. I remember being keeled over the kitchen sink during one of my gushing chemo nosebleeds, trying to fend off a panic attack with thoughts of sitting by the salt water pool with my husband that upcoming July. When I began this blog post the day before yesterday, I sat by that very pool. 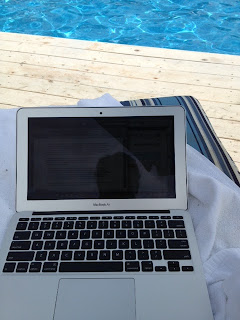 Not counting hospital stays or a handful of overnight trips to a wedding, Brian and I have not been away together since before Teddy was born. We talked about this Spruce Point getaway every day for the past few months—about how incredible it would be to play tennis or run together, eat gluttonous desserts (sugar included), and sleep through the night. I started packing a few weeks ago.

Then, the week before our trip, we both got really nervous. We felt guilty for leaving the kids and we worried that we would miss them too much to enjoy it. Brian, the frugal and sensible one, even took Teddy and Annabel to the toy store a few days before we left and let them each pick any toy they wanted. It was their “Nana-Papa-vacation toy,” and Brian’s attempt to spend away his own guilt. I eased my own mind by deciding that if we missed them too much, we would just drive back and get them.

It turns out that we aren’t the loyal guilt-ridden parents we thought we were. Not a minute after Nana and Papa drove away for the weekend with the kids tucked happily into the back seat, we both exclaimed, Freeeee-dom, and we were off.


For the next three days, we were guilt-free and giddy with joy and appreciation as we lounged around paradise. We kept singing Frank Sinatra’s "Heaven," or better yet, just the first line -- "Heaven, I'm in Heaven..." When I heard a kid crying or complaining, I turned to Brian, smiled, and asserted, "Not my problem." Seriously, the only problem we had at Spruce Point for those three sunny days was not being able to decide what to order off the menu of the world’s most delicious food. And sometimes I needed to reposition my lounge chair so that I remained in the shade.

There's something about sitting by a pool that overlooks the ocean, and jumping into cool water after a hot run, and lingering after dinner not worried about how the kids behaved for a babysitter; something so peaceful, that it has the power to, well, cure cancer. Because in the last 11 months, I have never had three days where I thought so little about that stupid disease.

We didn’t make any plans for our three days in Maine, except for one. I wanted to visit the church where we got married, so I called the church office a few weeks ago to see if there would be a good time for us to swing by. When I learned that the reverend who had married us still lead the church, I asked if it would be possible for us to say hello to her. It was, so we made it a date and Friday afternoon, Brian and I interrupted our poolside reading with a trip to see the lovely woman who had married us back on July 8, 2006.

I thought about my Mom when the reverend teared up the first time—about how the reverend and my mother were strangers to each other, yet they had something so huge in common—the experience of having watched their kids, who weren’t really kids at all, battle cancer. And I knew they were very similar because they both tear up not at the thought of cancer's cruel ways, but at all the good that people displayed in the face of it.

On the way out, Brian and I took some pictures in the same spots we had been photographed seven years ago. And yes, the diminished amounts of hair have been noted. 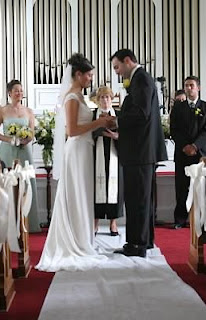 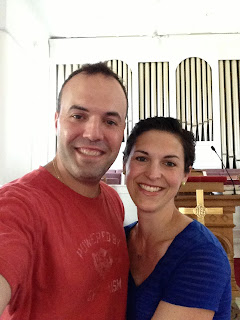 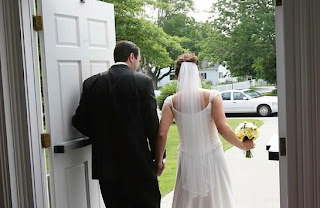 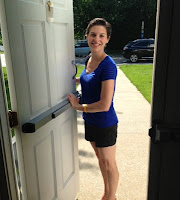 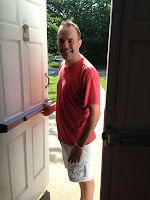 Having celebrated our freedom, I mean, our anniversary for three straight days, we both totally forgot that today was our "real" anniversary. Both exhausted from too much relaxing, we put away groceries, packed Teddy's Kids' Camp bag, and obeyed Annabel's growing list of morning orders. I have a doctor's appointment later, and thanks to me volunteering him, Brian has spent the day fulfilling our family's four hours of contribution to Teddy's camp (Happy Anniversary?!?). That means that Brian has been making kangaroos out of milk cartons while sweating through his clothes. He just texted me a photo of his newest kangaroo, along with a Happy Anniversary caption. Yes, the no-kid kind of vacation romance sure is fun. Like really fun. But the regular ole crazy kids kind of romance is pretty awesome, too. 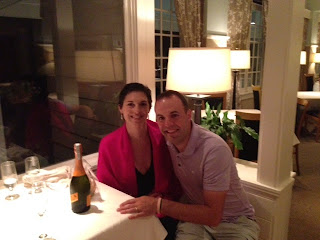 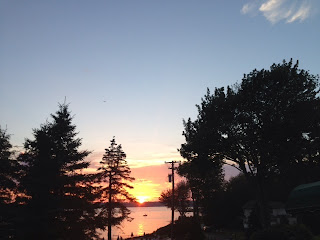