As I write this, both of my kids are upstairs hysterically crying. Annabel is screaming for her pacifier because we followed the directions of her dental hygienist, "Miss Nancy," and took it away from her. (From upstairs -- "I wannit! I wannit! I wannit!" Gasp for air ... Repeat.) Actually, today Miss Nancy suggested that Annabel "send the binkies to the Binky Fairy" so the pacifiers are sitting in an envelope in the mailbox right now. Annabel gets to choose a special gift tomorrow in exchange for her shipment to the Passie Fairy. She told us that she wants "Batman pajamas and a Superman squirty thing." I hope Brian is able to find those at Target.

To be honest, despite Miss Nancy's advice, we weren't planning this adventure to happen tonight. We figured we'd try it out in a week or two but Annabel being Annabel, she was totally psyched about mailing the passies out today, especially after she decided that the Passie Fairy knows Santa Claus. So we went with it. Unfortunately, now we're too far in to turn back.

As if Annabel's wailing isn't heart-breaking enough, Teddy is bawling, too. "I feel weally weally bad fo herw," he tells me between sobs. "I'm so sad because she's sad." I hug him and tell him what a sweet kid he is, but that doesn't help him at all.

Brian is sitting at the top of the stairs, just outside Annabel's bedroom door, intercepting her every time she tries to escape. I keep making return trips up to try to convince Teddy that Annabel is OK. On my last trip, I thought I had him in a good place when I told him that we would just give Annabel the passie if she got really upset. I figured that even though I couldn't back-pedal with Annabel, I could still pack-pedal with him. "But she's alweady weally upset," he argued. Dammit. He got me.

Today Brian and I played in the Scott M. Herr Memorial Golf Tournament. There are very, very few things for which I would miss that tournament, and a surgery to remove my cancer happens to be one of them. So last year, Brian and I were absent for this very special event while a surgical team removed my breast tissue and reconstructed my chest.

A day or two after my surgery, I remember Brian telling me that Scott's father and our dear friend, Joe, had mentioned our absence to the crowd that gathered for the after-golf festivities. We heard that Joe had explained why we couldn't be there, and that he had asked everyone to say a prayer for me. I already knew that Joe and his wife, Linda, were two of the nicest people I had ever met, but it's a genuinely special couple who thinks about their sons' former hockey coach's wife on the day of their youngest child's memorial golf tournament. And there's no doubt, this family is genuinely special.

Scott Herr wore the number five as a hockey player and as a baseball player at Canton High School, and given how much love there is for Scott and his family, it's no surprise that the number five has come to be a very powerful symbol of his legacy. Over the last few years, Joe and Linda have shared some truly unbelievable stories about how the number five has popped up in their lives (my favorite one involves the sun shining through the trees). Their stories give me the chills and as unbelievable as they are, I believe them completely. Maybe that's because, like so many people in and around Canton, I have my own stories about the number five. Tonight, I want to share just one.

A few months ago, I was having a tough Saturday. I thought I felt something foreign inside my chest and my anxiety was mounting. Teddy was outside with Brian and Annabel was napping. I wasn't in the mood to write so I decided to do the next best thing that helps my anxiety -- I decided to exercise.

I drafted out a workout for myself on paper, since that's the best way I've found to not do too much or too little. I pressed Shuffle on my iPod and I made my way through the workout until I was lying on a folded up beach towel on my screened-in porch doing sit-ups. As I counted by tens in my head, Garth Brooks's "The Dance" came on over the speaker. Instead of clicking passed the song like I probably should have done, I did the opposite -- I listened to the lyrics closer than I ever had. And I completely lost it.

"The Dance"
By: Garth Brooks

Looking back on the memory of
The dance we shared 'neath the stars above
For a moment all the world was right
How could I have known that you'd ever say goodbye?

Holding you, I held everything
For a moment, wasn't I a king?
But if I'd only known how the king would fall
Hey, who's to say? You know I might have changed it all

Yes my life is better left to chance
I could have missed the pain, but I'd have had to miss the dance

I know, I'm such a cheesy wimp. I mean We Bought a Zoo can send me into a crying fit but country music?!? Seriously? I hate to admit it but yes, seriously, these lyrics got me that day and I couldn't stop crying. No more sit-ups; just me, lying on my porch with tears streaming down my face, thinking of how much I hoped that my family would share Garth's sentiment if my cancer returned. Wishing more than anything that they would find a way to believe that the time we got to spend together was worth the pain of losing me. I was so terribly upset.

When the song was over, I sat up to try to collect myself. Then I saw something on the porch floor just in front of where I was sitting. I crawled forward to see what it was. It was a sticker. There were no other stickers, and still to this day I have absolutely no idea where this one came from. But, I swear to you (on Annabel's passie), it was a little gold #5.

All I could do was smile and look up to the sky. Because I don't care what atheists or agnostics or anyone else says. I believe in the human spirit and I believe that it lives on after death. While I don't see any reason that Scott's spirit would waste any time or energy on me, I nevertheless will forever cherish the magic of that moment.

My headache remains, but 80 minutes later, it's quiet upstairs. Brian just checked in on Annabel. He said she's sucking her thumb. And as for Teddy...tonight I realized something about him -- no matter how much he may look like Brian, he's an awful lot like me. 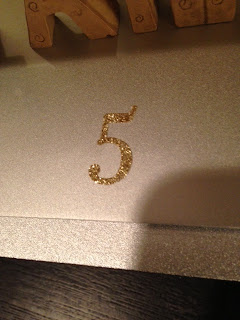