When Susan arrived to pick me up at my house last Tuesday morning just after 9am, she peeled into my driveway on two wheels (OK, maybe three).

"I drive fast, I walk fast, and I talk fast," she declared as I climbed in.

"That's OK. My mom usually drives me in so I'm used to crazy drivers," I responded, fastening my seatbelt.

"I swear a lot too," Susan cautioned.

"I don't mind in the slightest," I assured her. And we were off.

I met Susan earlier this year when I sold her a piece of furniture through my town's yard sale page on Facebook. It was only the second time I had participated in the virtual trading game and when Susan showed up at my house, I thought to myself, This lady must think I'm nuts -- I'm bald and sick-looking and so happy to help load a bed frame into her truck. But Susan didn't act like she thought I was nuts and she didn't look at my thin layer of fluffy new hair as if it were strange.

When Susan friended me on Facebook soon after, I didn't think she was nuts either, despite that I had never anticipated becoming friends with anyone via the Canton Yard Sale Facebook page. I instinctively liked this woman, and even though she was pretty much a stranger, I felt comfortable pressing Confirm to her Friend Request.

After that, Susan started following this blog and I started seeing her status pop up on my News Feed. I could tell that we shared some important opinions, especially after she published a photo of a protestor holding a sign that said, "Even if being gay was a choice, so what? People choose to be assholes and they can get married." That one, and others like it, made me laugh.

I also quickly liked Susan because she was a loyal platelet donor at the Dana-Farber / Brigham & Women's Kraft Family Blood Donor Center. I just assumed that donating platelets was something she had always done. Then, when Susan tagged me in a post and referenced my mom's Call to Arms, I thought to myself, There's no way she's doing all this because of that!?

It turns out, however, that Susan's dedication to donating platelets was inspired by my mom's request for people to visit Dana-Farber to donate platelets in my name for our birthdays earlier this year. I couldn't believe Susan's generosity then or now.

I also couldn't think of any way to thank her. So I decided that I would join Susan for one of her donations so that I could get to know her better and write about her; my way of showing my utmost appreciation for all she was doing for cancer patients at the institution I love. This is that post.

On Tuesday, I learned a lot about platelet donations, mostly from Susan, who claimed that she didn't know anything. But Susan knew a lot, including that Tums help donors when their tongue gets tingly and that the centrifuge machine makes a different noise when it is returning blood into the donor's body as compared to when it is drawing his or her blood out. I sat next to that machine for a few hours on Tuesday as Susan and I chatted about everything from our families to our jobs to the fact that nothing embarrasses her except clapping in church. She was hysterical.

One would think that a woman with two children, a husband, and four different jobs to juggle would have little time to donate platelets, never mind, to do so every other Tuesday. Indeed, Susan has every reason to declare, like most of us do, that she doesn't have the time for it. Instead, Susan tells her boss when it's "Platelet Tuesday" and that she cannot do anything until she has donated her bag or two of platelets. Susan is not a lady you mess with, and I'm almost certain that her bosses already know that.

Susan chooses to donate at Dana-Farber because they are in constant need of platelets and because the platelets are almost immediately used right then and there. I never had to have a platelet transfusion, but when my chemotherapy caused me terrible nosebleeds and persistent bloody gums, Dr. Bunnell instructed me to come in to have my platelet count tested. My platelet count was good enough, which meant that my blood would clot properly and stop my nose and my gums from continuing to bleed. Other patients aren't so lucky and so they need a bag or two of platelets like the ones that Susan has donated since February. Without those platelets, an already complicated situation would become a heck of a lot worse.

The shortage of platelets at Dana-Farber is very real, especially considering the volume of patients undergoing chemotherapy there. Since platelets cannot be frozen and are good for only five days after donation, the shortage is particularly severe during holiday weeks and times of severe weather. Also, relatively few people take the time to donate platelets, and even fewer do so on a recurring basis. Donating blood is just easier, people think, and in many ways, they are right.

On Tuesday, I saw with my own eyes that platelet donation is time-consuming, though not drastically so. The timing varies depending on people's blood flow and ratio of platelets, which they test in the first few minutes of the donation. Susan's donation was set take 103 minutes according to the computer attached to the centrifuge machine (pictured here). 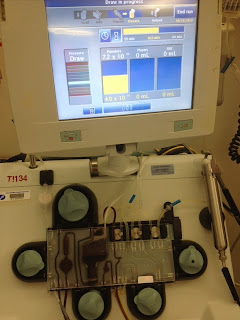 Of course, adding on a 10-15 minute screening appointment and the commute, Susan spent her whole morning at the Kraft Family Blood Donor Center. In fact, around 12:15, I had to leave to hop on the Green Line to work, and when I left, Susan was still in her chair squeezing the little red ball that they gave her to keep the blood flow in her arm up to speed. I don't want to downplay or exaggerate the time commitment, but in the end, four to five hours every other week is significant, to almost all of us, including Susan.

"I don't have money to give, but I can give this," Susan explained, "so I do." Even better, she encourages her friends and family to come with her. There's a Wall of Champions in the Kraft donor center, covered in photos of the most loyal donors. I have a feeling that Susan will be on that wall one day.

Susan is a special lady, and I love that she grew up in the neighborhood that I now live in. That just feels like good karma. Plus, she introduced me as a "cancer survivor" to all of the nurses that she knew by first name in the donor center, and I loved how confident she sounded when she said that.

I also loved that Susan protected me like a mom would. When one of the nurses remarked that I was "so young" to have breast cancer, then started talking about a TV program she saw about the increased incidence of breast cancer in young women, Susan immediately put her hand up towards the nurse and instructed her, "Stop! Don't scare her!" The nurse covered her mouth and didn't say anything more. When another nurse went to heat up a warm pack in the small microwave that was right next to me, Susan told me to move away while the microwave was on. The rational part of me doubts that a microwave could cause a recurrence of my cancer, but I can't explain the comfort I felt knowing that I wasn't the only one with another part of my brain that thinks it could.

Susan's parents raised nine children, so clearly heroism runs in the family. Her mother survived bladder cancer and breast cancer, but leukemia finally took her life several years ago. Now, Susan's father is very ill and just before I left her on Tuesday, she was texting with her family members about how they were going to coordinate with hospice to take care of him. I know that Susan had a hundred things to do that day, and as I ran out to work, Susan was still sitting in her chair as the big machine took out her blood, spun off the platelets, and returned the blood back to her. But Susan never complained, because it was Platelet Tuesday. And on Platelet Tuesday, along with swear words, broken speed limits, and an excessive amount of Tums, Susan makes the time to save lives. She gives something that no factory can produce and no medicine can replace. It's what she can do. So every other Tuesday at 10am, she does it.


If you or anyone you know may be interested in donating blood or platelets at Dana-Farber / Brigham & Women's Kraft Family Blood Donor Center, please call 617-632-3206 or email blooddonors@partners.org.  A staff member will get back to you and you too could become a champion to cancer patients in need of your platelets.