I wept like a child. Not because I was overwhelmed at having survived, although I was. I was weeping because Richard Parker left me so unceremoniously. It broke my heart. ... I suppose in the end, the whole of life becomes an act of letting go. But what always hurts the most is not taking a moment to say goodbye. I was never able to thank my father for all I learned from him. To tell him, without his lessons I would never have survived. I know Richard Parker's a tiger but I wish I had said, "It's over. We survived. Thank you for saving my life. I love you, Richard Parker. You'll always be with me. May God be with you."
~Pi Patel, from Life of Pi


I received my last Herceptin infusion today in the exact same chair in which I had my anaphylactic reaction almost one year ago. When the nurse lead Brian, my mom, and I back to that chair, I couldn't help but laugh at the sheer coincidence that this would be only my second time in that particular infusion suite. "Back to where it all began," I remarked, and a few minutes later we found ourselves sarcastically singing, "Memories."

The process of inserting the IV into my arm had not been an easy one three weeks ago. The infusion nurses kindly dug a needle around in my veins five different times before, 45 minutes later, they found a route into my bloodstream. It wasn't fun, but it didn't cause any damage aside from four big bruises on my arms that made me wonder if people could think I was a drug addict. I knew that it was mostly my own fault -- the day prior I had traveled for work and I hadn't focused on drinking water like I usually do the day before an infusion. My veins were dehydrated and tired and screaming that they had had enough.

Yesterday, I drank about 15 glasses of water and I had consumed at least four more this morning by the time I reached the infusion chair. The excessive time spent in the ladies room was worth it because my IV went in on the first try with only minor needle-digging. The Herceptin bag made its way up from the pharmacy soon after and so began (what I hope will be) the last infusion necessary to successfully treat my cancer.

The infusion itself was normal. Brian caught up on one of his (previously) secret fascinations -- People magazine -- and my mom faked that she was taking care of a work issue while she coordinated a surprise gathering of my family eight floors down in a conference room. I didn't do much more than sit back and feel the cool liquid flow into my arm.

When a patient's bag of chemotherapy or biotherapy medication drips down to empty at the end of an infusion, the computerized machine attached to it starts to beep. A half hour into my Herceptin, I knew the beeping was imminent. I hadn't planned what I would do or think or feel at that moment. Come to think of it, I probably should have because it could have been really bad, but luckily, what happened was perfect.

Somehow, everything around me fell quiet. I leaned by head back on my chair and looked up at the near empty bag of Herceptin. I watched the drug drip into the tube attached to my right hand. I caught it at just the moment that the very last of the liquid traveled out of the bag. My teary eyes followed it, and the air bubbles that trailed, as it moved along the clear tube and into my vein. I will never forget watching the clear liquid fall through that tube, or the air bubbles that playfully chased it. I will never forget how time froze at that moment; how, despite how odd it may sound, I inadvertently stumbled upon a precious moment to say goodbye.

It's not easy to say goodbye to something that saved your life. That's why I love the Life of Pi quote so much. I suppose in the end, the whole of life becomes an act of letting go. But what always hurts the most is not taking a moment to say goodbye. Despite weeks of trying to mentally and emotionally prepare for today's milestone, I never anticipated that I'd be blessed with a moment like I somehow was able to capture today; a moment to silently be thankful -- thankful at a cellular level -- for every minute of work, every penny, and every sacrifice that went into making it possible for my chemotherapy and my Herceptin to drip into my veins and save me.

Once the beeping started and before the nurse came in to turn it off, I also got a minute to smile through my tears at my mom and my husband; to hold their hand, thank them, and tell them I love them.

The whole of life becomes an act of letting go. It sure does, on an infinite number of different levels. I don't think that any of those levels are easy, and I believe that our lives are largely shaped by how we act, or react, when faced with them.

When Pi finally found land, he wanted to tell Richard Parker, It's over. We survived. Part of me wants to say the same thing tonight. But another part of me knows that cancer, and life, isn't usually that simple.

I admit, I'm not great at letting go, and, it turns out, neither are some of the people who I love most. Sure, that weakness has its drawbacks, but it also has its great benefits. Because on August 25, 2012, I wrote about how we wanted to take the kids to Disney World when I was done with my treatment. I learned today that my family never let go of that little sentence. Instead, they colluded to make it happen, and in a few weeks, we will all head to Disney together -- not so much to celebrate that it's over. But to celebrate that lots of awesome adventures are only just beginning. 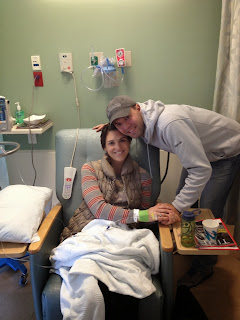