I'm not even going to bother to count the number of blog posts that I have started on the topic of My Last Day of Treatment, although I think it's somewhere around six or seven.

I remember a few other times when I faced a similar difficulty while trying to write. One was after the chemo portion of the yearlong infusions ended. Another was before my one-year diagnosis anniversary. Regarding the latter, I tried for weeks to write about the storm of emotions that hovered over August 8th but I failed to produce anything that I could hold onto, never mind something that was coherent enough to be published. Finally, I gave up trying to write anything more significant than simply what I was feeling at the time my fingers touched the keyboard. I didn't even try to come up with a catchy title. I just called it, "The One About August 8th," an approach I totally ripped off from Friends.


Once my confused blabbering in "The One About August 8th" was finished, I posted it to my Facebook page. Not long after, I had a comment. It was from Joy, a grieving mother who I had come to care so very much about. Just one week after losing her 26 year old daughter, Ashley, to complications from cystic fibrosis, Joy wrote to me about August 8th. In her comment, Joy said simply:

"Tomorrow you will take a deep breath and continue living."

My Last Day of Treatment lead me back to Joy's words. Tomorrow I will take a deep breath and continue living. Yes, I will. And I don't take any part of that for granted.

I recently stumbled upon this African proverb. 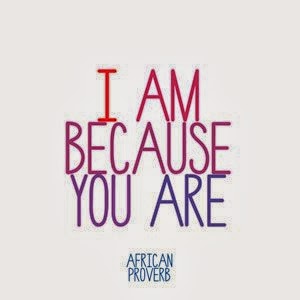 Tomorrow morning, I'll try really hard not to fall into a heap of emotion on the floor of Dana-Farber. I'll try so hard to be strong. If I succeed, it will be because I've seen people display unspeakable strength when I'm sure they wanted to crumble. To all of those people, some of whom are as close to me as my mother or my husband, and others who are as distant to me as a mother from Maine that I've only met in person a few times, I hope you know that I am because you are. And, by the way, I would consider my life an enormous success if, one day (hopefully in the very distant future), my own children are able to say of me, I am because you were.
Posted by Tara at 11:58 PM