My family says I have a revisionist memory. They say that I take times of my life that weren't very good and I remember them as if they were great. I admit, I sometimes do that. But in at least one case, I've also done the opposite -- I've taken a part my life that, in real time, I hadn't consciously recognized as awful and I've come to realize that it was, actually, kind of shitty. That time involved my commute to work.

I never consciously declared that I hated that commute but for a variety of reasons, I did. Those reasons ranged from the gate at the train station parking lot that often malfunctioned, to the fact that those two hours commuting were always my most anxious hours of the day. During that time, I'd often find myself worrying or making mental lists that felt too big to tackle. I'd worry about many things -- terrorism, one of my kids choking on their lunch, falling icicles off office buildings. I looked calm on the outside, and I could even laugh about my nuttiness, but inside, a river of worry flowed through my veins. (Note: one exception -- when my mom picked me up and we commuted home together -- I always loved those rides.)


When I think about the route that I walked, or better yet, ran, from my old office to the train, I want to be sick. Looking back, I can see the tourists and their shopping bags obliviously blocking the way. I can feel my legs burn from taking the stairs two at a time and I can feel my shoulder ache as I held bags of laptops and binders and more binders. I can hear the ding of a new email, likely with another task that needed to be done in short order.

When I made it in time for the train, the adrenaline was pumping so I felt good. But by the time I reached my seat, the anxiety would set in again -- that feeling of being overwhelmed by all I had to accomplish that night, from making the kids lunches to researching a topic I knew nothing about. Countless times I thought to myself, I waste two hours of my life every single day on this stupid commute. And I hate to waste time.

Switching jobs to a firm where I didn't feel like I was breaking out of prison when I left at 5:30pm helped cure a lot of the commuting anxiety. If I missed my train to work, I would just catch the next one and I knew everything would be OK. I found an incredible morning babysitter and started to park in a lot without a malfunctioning gate. Still, I'm wired with good ole God-given anxiety so it never disappeared altogether.

Enter the Little Peach Pill. The Little Peach Pill has become a regular character in this space. As I've explained before, its real name is Effexor and while my oncologist prescribed it to me for anxiety, I have since learned that it’s considered an anti-depressant. Whatever it is, it works. Or better yet, it worked.

The best way I can describe what the Little Peach Pill did for me is to say that it made my brain relatively frictionless. I was still me, so I’d still worry about a plane flying into my office building, but instead of feeling real anxiety about it, the thought would just glide through my brain, as if it effortlessly exited out one of my ears.

The Little Peach Pill helped me a lot. Thoughts of terrorism and school shootings and natural disasters passed in and out and didn't get stuck like they had before. The Little Peach Pill was my friend, helping me find peace at 70%, and most of all, helping me not dwell on each and every pain or unexplained feeling as if it was a recurrence of cancer. But then, a few weeks ago, the Effexor stopped working. Clinically speaking, I'm convinced that it "pooped-out."

I have since learned that Effexor, as well other anti-depressants, can just stop working for reasons that a doctor can't precisely identify. No joke; doctors actually call this the "poop-out effect!" I know that some very reasonable people won’t understand this because even my own husband -- a very reasonable person -- doesn’t get it. But I also know that it’s true. In the last few weeks, my Little Peach Pill became nothing more than a placebo, a co-pay, an extra gulp of water in the morning. The friction returned to my brain and thoughts that had once flowed out of my ears got stuck inside again; like an air hockey puck that can't find the net.

As I wrote about last week, the pain in my neck has been the worst of my worries. I was convinced I felt it. It. A recurrence. The dreaded beginning of the end. It was scary; so very scary that one night last week, I couldn’t stop crying. Poor Brian had no idea what to do or what to say, probably because he likely thought I was long past this sort of a meltdown. But he could tell I was upset, really upset, so he dug out the orange bottle of Ativan, handed me one, and let me cry. Then, he fell asleep.

A few years ago, I would have been so mad at Brian for falling asleep while I cried all over my pillow. But I've changed that way. The newer me actually thought it was funny (the next morning, of course). Because it was -- the yin and the yang of the two of us. Plus, I felt relieved for the guy -- at least he can turn his brain off. And that's what made me jealous; really, really jealous because Brian, like so many others who don’t have first hand experience with anxiety, can't fully understand what it’s like to have a brain full of so much friction that it just can’t let some thoughts go. These normal folk say things like, “Just don’t think about it.” Seriously now, I love the man, but when Brian says that to me, I want to throw something at his head and scream, “You think I want to think about nuclear attacks and a drunk driver jumping the curb in broad daylight?! Really, I don't!”

I felt a strange sort of loss when I started to realize that my medicine wasn’t working anymore. I also felt that most familiar of feelings -- fright. If my body could adapt to Effexor, does that mean it could also adapt to Herceptin? If my brain cells could eventually overpower the anxiety medication, would the HER2 protein win out over the cancer drugs? The stupid air hockey pucks that wouldn't fall out of my ears frustrated me. They frustrated me mostly because I felt like I was moving backwards.

On my walk to South Station from work yesterday, I walked by at least six different signs that read, “Caution Falling Ice.” After the second one, I immediately had the urge to write. I itched to think more about those signs; to put down on my computer screen why they fascinate me; and why lately, I've felt like there's an icicle dripping vengefully above my head.

As a “cancer survivor,” I feel like I am constantly walking by signs that warn me about falling ice. Should I look up to try to elude the dagger of frozen water? Probably not, as an icicle in the eyeball would certainly be worse than one on the top of my head. Should I walk faster? But the faster pace could lead me to the plummeting icicle that I otherwise wouldn’t have reached had I kept my regular pace. Should I cross the street? No; there’s falling ice over there, too. Plus, I don’t want to let my fear rule me. So I just keep walking and hope for the best. Then I wonder if it would just be better if the signs weren't there at all. If there's nothing I can do about the ice, how exactly do I use caution? And if I'm not cautious, am I foolish, or am I, in fact, enlightened?

I drafted this post on the train ride home last night, crowded between other passengers with puffy winter coats. During those 30 minutes, I felt an awesome sense of victory, or maybe, even, a tinge of enlightenment.

I'm starting to accept that my Little Peach Pill, the one I was so hesitant to welcome into the cast, may need to be written off of this show. Maybe I'll talk to my doctors about a different medicine or a different dose, but I'm not there yet. Not even close.

Nevertheless, last night's feeling of victory was so very sweet. I realized that even though my Effexor pooped-out on me, my keyboard can still work its magic. And that magic has brought me a newfound love of my commute -- of the two hours every work day to think and breathe and write. Of life.

As I walked by Caution signs on the city sidewalks last night, I thought about those signs, about how, despite them, I didn't get the worry about falling ice stuck in my head. Instead, the worry slid through my brain; as if to make way for thoughts that I could start to type when I found my seat on the train. And rested my hands on my keyboard.

Me: Bri, when you see one of those "Caution Falling Ice" signs, what goes through your head?

Brian: Um, nothing. Why?

Me: Oh, nothing. Just curious. 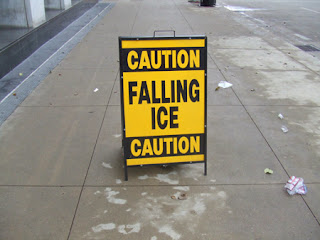