When I was in elementary school, I was convinced I was going to the Olympics. I had, after all, won a race or two at my school's field day so clearly there was a spot waiting for me on the U.S. track & field team. Plus, I could do a back handspring so obviously that meant I'd be a two-sport athlete at the Olympics -- adding gymnastics onto my sprinting feats. Sure, there would be some quick costume changes, but I was sure I could handle it. It was, after all, the Olympics; one of the most spectacular events in the whole wide world.

As I got older and realized that it took more than some backflips and blue ribbons at field day to reach the Olympics, I knew Olympic gold wasn't in my future. At that point, I fell in love with watching the athletes who dedicated their lives to their sport. The opening ceremonies would bring me to tears, especially when it came to displays of peace and freedom (Um, North and South Korea walking in together in 2000? Amazing.) and Bob Costas became my first man crush (no eye infection will keep him down!). Once I met Brian, I had even more fun watching the opening ceremonies because he would imitate the stadium's announcer when he introduced each nation in three of four different languages, which was really just the same word with different accents. I laughed every time.

When it came to the sports, I could watch anything (except ice dancing) and find it interesting. Even curling. Yes, curling. You ever try to scrap something really hard? I did yesterday when I tried to get Sharpie off of the play table. It's not easy, and it gave me a whole new respect for curlers.

Of course, I remember the last Olympics, the Summer Games in 2012. I watched NBC every early morning for weeks prior, just so I could countdown with Al Roker to the Games. I loved every minute of the anticipation, although I could have dealt with a lot less of Michael Phelps, and I always felt such disappointment when I heard stories about corruption and mistreatment behind the scenes of the preparation.

Despite my lifelong love of the Olympics, however, this year I've felt differently. It's not because of my fear of bombs made from toothpaste, or because I've been too busy and distracted. I feel differently because the Olympics were, for me, when it all began; on August 3, 2012 while watching some Tivo-ed and some live summer events. When I found my lump.

Now, it's a year and a half later. The Winter Games have rolled around and I'm still here, despite that back in August 2012, I wondered if I would live to see another Olympics. Physically, I feel great, and mentally, I'm in a pretty solid place, too. It's been weeks since I've felt any pain that I've twisted into cancer and that break has allowed my anxious mind some much needed rest. But still, it's been hard for me when I see stuff about the Olympics, even when its Bob Costas telling me about it.

And so I've sat here wondering where this post will go next. Some wallowing in how stupid cancer ruined the Olympics, perhaps? Nah. That'd just be letting cancer win.

So let's talk about winning, and I definitely don't mean the Charlie Sheen kind of "winning" (he so ruined that word). Rather, I mean the beating-cancer kind of winning. And, come to think of it, the Olympic kind.

When I used to watch the Olympics, I used to marvel at the fact that so many athletes would say things like, "I've worked my whole life to win a gold medal." I believe them, but I think that's incredible. They worked their whole life for gold. It's so very focused of them.

In that framework, some of the stories didn't end well. Take Michelle Kwan, for instance (not that I ever heard her say that her career was all about gold). Nine-time U.S. Champion, five-time World Champion, but never gold in the Olympic Games. The media loves to spin these kinds of stories as tragic. But from what I've read of Michelle Kwan, at least, she doesn't seem to think of it that way.

I still believe (most of the time) that cancer won't kill me. But nevertheless, I have a whole new understanding of what it means to "beat cancer." Believe it or not, it has nothing to do with cancer. I won't give that stupid disease the satisfaction.

To me, someone can beat cancer and die from it, too. In fact, my concept of beating cancer is indescribably more difficult to achieve than the traditional concept which, for most, involves getting all the cancer cells to go away. Because to me, beating cancer, like, really beating it, takes more courage and love than I could ever explain. It takes more than sitting through a whole bunch of treatment, and trust me, that's not easy.

I've seen with my own eyes several people who have done it; who have won over cancer in the way that I mean "win." One of those people was Mary, or "Julia" to some of my loyal readers. Yes, Mary died of breast cancer. But breast cancer did not kill her. Even in her last days, with the help of her loving family, Mary kept her dignity, her grace, and her inner strength. Even when she couldn't sit up and was coughing up blood, she exuded beauty and peace. She loved her children, her husband, and her God, and she cared for all of them in the most loyal of ways. Mary beat cancer, even if her obituary says otherwise.

I've seen other people beat cancer like Mary did, and also, thank goodness, in the literal way, too. I've seen a twenty-something cancer patient become an oncology nurse on the floor where she was treated. I've seen a kindergarten teacher teach all week and then head into Dana-Farber to receive her infusions after school on Friday. I've come to know a young mother who adopted a third child and powered through treatment for a recurrence to earn the coveted "cancer free" status one year later. I've made a incredible friend who had cancer while continuing to work and make sick kids' wishes come true (literally). I've met an awesome fellow blogger who has told me that his cancer will come back and when it does, he'll beat it again. And I've talked with a young woman who wrote that she's never felt more loved, or, in a strange way, been happier, than she's been while in the thick of a battle against triple positive breast cancer.

Some people could claim that this post suggests a theme of, "It's not whether you win or lose but how you play the game." That's not what I mean at all. What I mean is that even if my cancer were to return, and, heaven forbid, if it was something that my body ultimately couldn't handle, I still expect to win.

In the mean time, I'll tackle smaller slopes, starting, perhaps, with recording the opening ceremonies and watching it this weekend. I admit, cancer almost took the Olympics away from me. But tonight, at my keyboard in my 70% clean house, I've realized that neglecting the Olympics would be letting the disease win. And as I've said before, that, I refuse to do.

So, in the words of Visa, Inc. and Morgan Freeman...Go World. 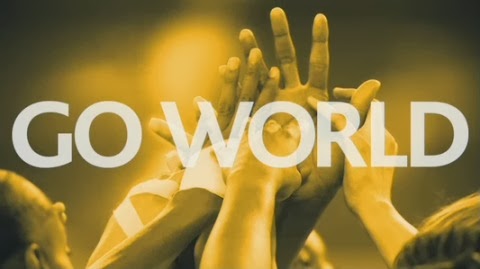