I am really good about making sure clean laundry is available to my family but I kind of suck at folding the clean clothes and putting them away. For the last few days, three baskets of clean laundry has lingered around our kitchen table as the kids fetched their favorite clothes and faded bathing suits out of them.

Last night before the kids went to bed, in an effort to ease them back into the reality that summer is ending and structure and responsibility are on the horizon, I decided that we would all fold the laundry together and finally put it away. Teddy and Annabel saw it as a way to stay up later so they agreed to help. It went swimmingly. For the first 90 seconds.

Then I found a lady bug.

It was odd, I admit. The lady bug looked perfectly fine, stuck to the inside of a new black t-shirt that I had just purchased on sale (apparently I missed the "dry flat" instruction so what was once a medium is now an extra small...oops).

Anyways, I remarked about the lady bug to Teddy and Annabel and, perhaps seeing a chance for an even further delay to bedtime, they appeared interested. I tried to pick the lady bug off the shirt to bring it outside but the little shiny bug fell to the floor. Clearly the thing was dead. D-e-a-d. Dead.

At first, I pretty much ignored her. I had a goal: finish the damn laundry before bed. So I told her something about heaven and figured she'd move on with me. She didn't.

She kept crying and I could almost see the thoughts in her head. Thoughts about permanence. About something or someone being gone. Forever. As I let her emotions seep into mine, I could feel my heart start to feel heavy. Sad and scared and heavy.

Annabel kept on asking me whether someone who dies will ever "get not dead again." I had no freaking idea what to say. Still folding and trying not to make a big deal about it, I tried to tell her something about a person's spirit remaining alive. But she didn't understand, probably because I didn't make much 4-year-old sense. I stopped folding.

I picked up my daughter and sat down with her on a big chair in our living room. I hugged her. I told her that sometimes I have thoughts like she was having and those thoughts are so hard. I agreed that it is really yucky to think about someone you love being gone. She settled down a bit.

Still stumped as to how to deal with the sobbing, I went back to fundamentals. My own adult fundamentals, I admit, but it was all I could think of. I told her, "Oh, my Boo," (that's our nickname for her) "Let's not think about years from now. Let's just think about this moment. And at this moment I'm here and you're here and Daddy is here and Teddy is here." She immediately retorted with something about one day us "getting dead" and how sad that would be. She's so darn persistent. And so darn right.

The heaviness in my heart grew heavier.

I held her tight and said I understood her but that sometimes when it's scary to look ahead, we just need to think about what we have at this very moment. I repeated to her that I understood and that I get sad when I think about those things too. I told her that she was brave to talk about it with us because that's hard to do. She cried a little more and may have even started to recognize this conversation as a tactic to further delay bedtime (I don't think it started out that way, but still...). So I shut that door, thank you very much, and carried her upstairs to brush her teeth. A few jokes about Daddy's belly button lint and she was giggling again. Thank goodness for Daddy's belly button lint.

In the end, I have no idea if I made things better or worse for my Boo last night. I just know that as I sang George Michael's "Faith" to her at bedtime, she was smiling. Thank goodness for George Michael too, I guess.

Now if only someone would put away that folded laundry at the top of my stairs. Nah. I'd rather just write about it.


(To be continued...Because Teddy's mind is always going, too...) 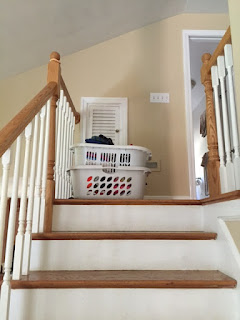 For those looking for more information about speaking to children about cancer and death, check out these recent pieces that I really appreciated.

Dana-Farber Cancer Institute Blog by Gabby Spear, "How I told my young kids I had cancer"

Boston Globe Article by Kristi Palma, "Talking to young children about death" (I hesitate to include this one because upon re-reading it, I realize that I failed on several pieces of the advice!)
Posted by Tara at 3:23 PM